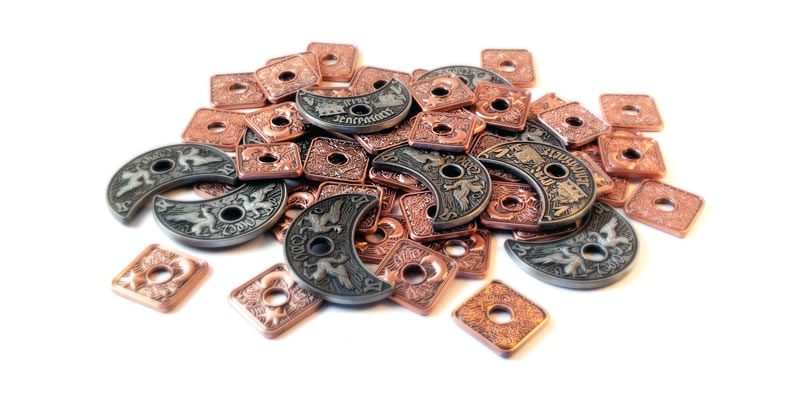 Just like a long-term relationship, sometimes D&D needs a little spice to shake things up. Traditional ways of doing this may include: switching out the DM for a new one, trying an original home-brew adventure or story line, starting the characters at a higher level, or even a foray into an evil campaign. But what follows are five gimmicks (or tools if you want to be more diplomatic) a DM can introduce to change the way the game is played and add a new element to your regular routine. Warning: your results may vary.

Once upon a time, I was introduced to a game where all of the players had to keep track of their coins, gems, and other wealth using real-life items. In this particular case, copper coins were represented by pennies, silver by nickels, gold and platinum by poker chips, gems by glass/plastic beads, and any letters of note were actually written out and given to the player. Also, all of the PCs were responsible for holding onto these items between games by placing them in their dice bags.

This gimmick has two main purposes behind it. Firstly, players are much less likely to spend all of their money frivolously if they have a physical representation of it in front of them. (This same principal applies to having cash in your wallet or purse vs. debit or credit. Many of us find the physical cash much harder to part with.) Secondly, players are less likely to horde coins and wealth when they have to carry it around week after week in real life. Believe me, you quickly decide to purchase that masterwork longsword when your dice bag is about to burst!

In official Adventurers League play, the DM has the option to hand out a paper certificate that represents a magical item, potion, or artifact. However, I’ve seen DMs that take this concept a lot further and actually hand out physical items. Sticks become wands, potions become juice boxes, figurines become action figures, and sometimes even toy weapons are introduced.

Now I understand that this may be an impossible gimmick for many DMs to pull off for every item that they wish to doll out during the course of an entire campaign. But perhaps introducing a prop or two, especially if your story line revolves around one particular item, is not such a bad idea. Giving your players something they can touch, hand around, and interact with is a great way to get their attention and fire up their imaginations. This is especially true if one or more of your players have trouble with the whole “theatre of the mind” concept.

It seems to me that you can’t throw a stick in Facebook, Google +, or Reddit without hitting a D&D group of some kind. At the time of this writing, I’m currently involved with no less than seven. But so what, you might ask. Well I’d like to enlighten you to the fact that Facebook, and other social media sites, may be the greatest gimmick/tool a group can have at their disposal. Here are a few reasons why from my own personal experiences:

Firstly, almost all of my D&D games are both scheduled and confirmed on Facebook these days. If someone is sick, late, or our location needs to be changed at the last moment, it is posted on the group page and people know about it instantly. Secondly, if anyone misses a session or needs to ask questions about something they didn’t understand, I, as the DM, have the ability to keep them up to speed either with the whole group listening in or with them individually with a personal message. I also find that players will use their Facebook group to discuss strategy and make long-term decisions for the group. I’m also finding it more and more common for DMs to go onto social media for ideas, questions and answers, critiques, and inspiration from other online DMs. Lastly, I love publishing social media that builds the excitement for the weekly D&D session or praises the group for something fantastic they did the week before. It allows me to show my enthusiasm and it gives the players something to tide them over and keep them involved during the down-times.

Anyone who has played a console, smartphone, PC, or internet game in the past five years should know what achievements are. It is something you can attain for performing an act or a series of acts within the game. Sometimes they are just for fun or bragging rights, such as Minecraft, and other times they are a currency you can trade in for special abilities or events, such as The Sims. Either way, they have become a standard feature on many of the games we now play and adding them to D&D can be an interesting new gimmick to reward your players.

So how would this work? Well let me be clear by saying that this reward system would be completely in the hands of each individual DM. However, here are a few achievements I imagined I could add to my games: five or more kills in one combat; saving a PC from certain death; getting a critical hit with a called shot; three critical misses in one combat; roleplaying with style; roleplaying with the final boss; roleplaying fail; and, my personal favorite, accidentally killing another PC. And what would your players get for these achievements? I can imagine things like magical items, potions, or even a few bonuses to skills or feats. And yes, I would reward even the negative achievements as I’m sure that most players will understand that they are being humored and it’s all in good fun.

Unlike achievements which can be bestowed for everyday events and even multiple times, player awards are much rarer and should only be given out under specific conditions or at the end of a campaign. This would be a way to show your players that you have been paying attention and really appreciate the extra effort that they have put into the game, not unlike the awards that many sport leagues hand out at the end of each season. Such awards might include: roleplayer of the game, combatant of the game, best sportsmanship, best overall group player, weirdest/funniest situation of the game, best kill of the game, and many more. Having the DM decide who gets what can be diplomatic, but having the players vote on who gets what might yield the best results.

And you might ask, what is the point of these awards if they come at the end of the game? Well for one, they increase group moral and they can imprint a lasting impression of accomplishment on the winning players. Even those players that don’t get an award will be eager to try again next time. Secondly, if the DM is so inclined, these awards might come with some sort of boon for the next adventure or campaign. I’m thinking like an automatic 18 to one of their stats or maybe their next character starts off with a special piece of information that the other players don’t have. I’m sure there are hundreds of things you can think of to make things interesting.

Overall, gimmicks are not for every group. Each DM has to make up his or her own mind regarding what they want to allow or restrict while also respecting the wants and needs of their players. Sometimes, adding a little something extra just gets in the way. Other times, a little change can make a game a lot more memorable.