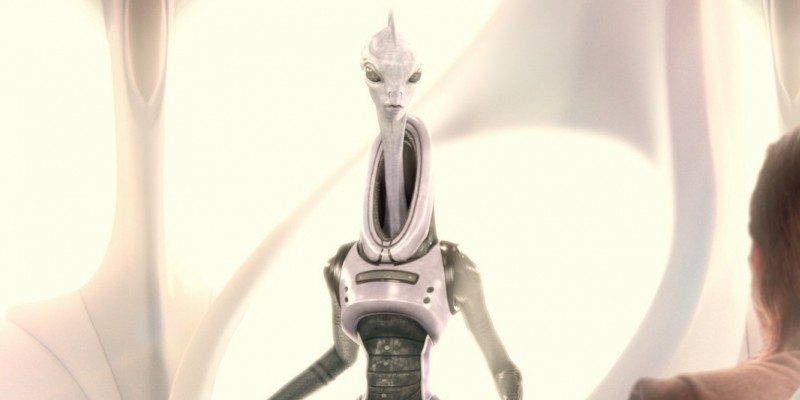 The kaminoan species in the Star Wars universe played an integral role in the fall of the Galactic Republic and rise of the Empire. The victims of a near-genocidal flood after their planet’s most-recent Ice Age, the kaminoans turned to highly selective and brutally efficient breeding and genetic manipulation to survive. The long-term results of such environmental pressures were perfectionism, isolationism, and a lack of empathy for species that don’t strive for perfection.

After the disastrous end of an ice age on Kamino known as the Great Flood, Kaminoan society was pushed to the brink of extinction. Only through the development of a mastery over selective breeding, genetics, and cloning were the Kaminoans able to survive. The calculating instincts of survival required of the Kaminoans produced heavy marks upon their late forming culture. Kaminoans were minimalist in their designs; perfectionists to the point of intolerance. The impact of the harsh adaptations the Kaminoans were subjected to was also viewable in their inward focus and isolationism. Kaminoans focused on little else than their cloning and interacted with off-worlders as little as possible.

As a 5th ed race, kaminoans would likely have resided on an island-continent similar to Australia, though significantly smaller, with steep central mountain ranges that would have kept the culture concentrated near the shores. Raising the water level of the planet’s oceans would cause wide-ranging disaster. If you aren’t interested in making a Great Flood a part of your world’s history, you could instead have the island-continent suffer a geological disaster, slowly sinking into the water or breaking apart over generations. Kamino’s distance from other civilized lands, and the kaminoan’s inherent xenophobia likely kept them from developing vessels sturdy enough for the open sea.

The platformed cities we see in the prequels could be greatly expanded, creating a metropolis built on stilts resting on the remnants of their former home. Minerals could be mined from the mountain peaks that jut above the surface, likely by amphibious slaves or constructs able to work in both air-filled and flooded tunnels. 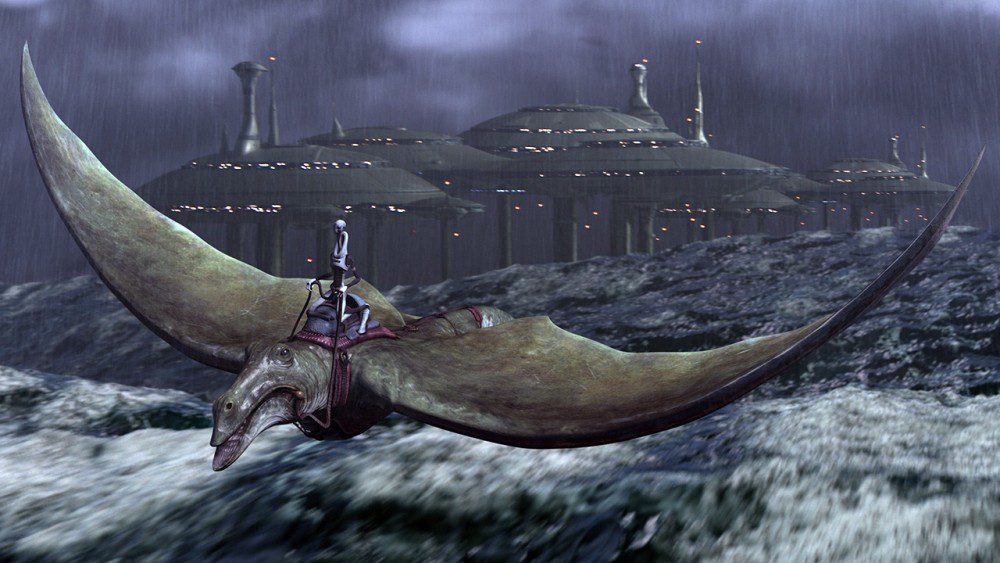 Ability Score Increase. Your Intelligence increases by 2, and your Dexterity increases by 1.
Age. Kaminoans reach adulthood at age 11, remain at their physical peak through their 40s, and don’t show signs of aging until their 80s. Though the majority of kaminoans rarely live longer than 80, rumors abound of near-immortal kaminoans living thousands of years.
Alignment. Kaminoans are the epitome of intellectual pursuit and cold, calculated results. The majority of kaminoans are lawful neutral. Those discovered to have chaotic, good, or evil leanings are deemed as “inferior” and sentenced to death before they can taint the bloodline. Of course, PCs may have escaped the inevitability of such fate in a number of ways to wander the outside world.
Size. Kaminoans average 6 feet 6 inches in height. Your size is Medium.
Speed. Your base walking speed is 30 feet. You have a swim speed of 30 feet.
Hold Breath. Originally evolved from an amphibious species native to kamino, kaminoans may hold their breath for a number of minutes equal to their Constitution score.
Higher Education. Choose any two Intelligence, Wisdom, or Charisma-based skills. You gain proficiency in those skills.
Perfectionist. Choose one skill or tool kit with which you have proficiency. You may double your proficiency bonus on rolls using that skill or tool kit.
Languages. You speak, read and write Aquan (or Kaminoan if you wish to include it as a separate language) as well as one other language (typically Marine Trade or Common)

Genetic manipulation is rarely a part of fantasy settings, but alchemical research makes a great substitute. Broadening their focus on perfection to include art, music, and architecture, as well as magic (the “technology” of many settings) allows them to dip into other classes while maintaining their cultural theme. Their extreme self-reliance and history of apocalyptic disaster would likely turn them away from the divine classes. The kaminoans in the Star Wars universe defended their worlds with genetically-engineered combatants rather than fighting themselves which would make an interesting culture-clash for PCs visiting their stilt-cities. Are their guardians constructs, trained monsters, or slaves bought and controlled through alchemical means? Would a kaminoan every look to physical perfection as a parallel to intellectual? If so, the Battle Master and Eldritch Knight archetypes may work well, as might any of the house-ruled psychic class variants or the mystic class being play-tested through Unearthed Arcana.

An entire race living in massive stilt cities built on the remnants of their past suggests that some kaminoans would become marine archaeologists. But do the ruling councils want their history known? It’s easy to imagine that a race focused on perfection might rewrite their history to meet their current cultural beliefs. How militant are the kaminoans about keeping their history hidden? Rumors of ancient alchemical devices, lost tomes of knowledge, and hidden treasures would draw fortune hunters from far and wide. Do the kaminoans kill trespassers? Is there an organization of assassins that kill and return stolen artifacts? Is their zeal born from xenophobia, or something more sinister? What if they are hiding something else, like the fact that their own actions caused the disaster that nearly destroyed their culture? An alchemical weapon gone wrong? A portal to a dimension waiting to open? Or simply the truth that the kaminoans of history aren’t the pinnacles of perfection they claim.

5 Things The Legend of Zelda Taught ...