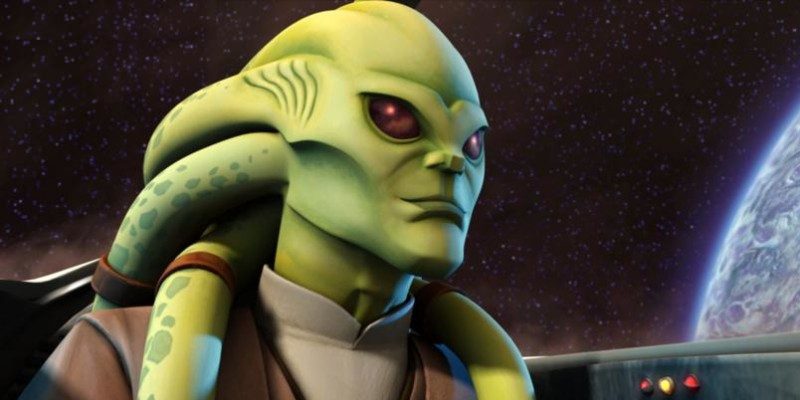 Nautolans are a highly adaptable amphibious humanoid species canon to the Star Wars Universe, the most famous being Jedi Master Kit Fisto.

Nautolans make an excellent species template for any aquatic scifi species or fantasy race. Their comfort both above and below water makes them ideal for mixed-surface-aquatic parties of adventurers, allowing them the flexibility to travel from the depths of the ocean to the middle of the desert without suffering stresses worse than an average human in non-aquatic environments. Their hardy physique combined with their natural insight into the emotions and behavior of living creatures make them both capable warriors and shrewd diplomats.

In a standard D&D setting, nautolans could live in a range of climates including coastal settlements, island chains, deep sea trenches, or even nomadic tribes. Their empathic abilities and tendencies toward good alignments would make them the natural enemies of aquatic aberrations like aboleth and violent humanoids such as sahuagin and kuo-toa. Though physically sturdy, many nautolans are drawn toward spiritual and intellectual pursuits.

Nautolans possessed physiology common to amphibious species, including low light vision and excellent swimming skills. They stood an average of 1.8 meters, had smooth green, blue, or brown skin, and large black or dark maroon eyes with lids that were seldom used. They were capable of breathing underwater; however, unlike other water-based species, Nautolans did not experience difficulties out of water.

Nautolans possessed exceptional olfactory and pheromone-sensing skills, enhanced by head-tresses. These tendrils were used to detect the emotional state of another being, but were most effective underwater. Within Nautolan culture, the ability to sense pheromone changes was an essential part of the communication process. All Nautolans had fourteen sensory tentacles and multiple hearts, which were capable of beating separately.

Like their sense of smell, Nautolan language was also maximized for use underwater and not fully pronounceable in a gaseous atmosphere. Because of the loss in linguistic detail, most Nautolans chose to speakAnselmian or Galactic Basic when traveling off-world. In addition, Nautolans used other communicative cues when submerged, such as reading the swirls in other Nautolans’ large eyes.

Ability Score Increase. Your Constitution increases by 2, and your Dexterity increases by 1.
Age. Nautolans reach adulthood at 15 years and rarely live natural lives longer than 70.
Alignment. Nautolans are a sensitive species, detecting the emotional states of creatures around them. Though they hold a range of philosophical beliefs, their empathy leads the majority of nautolans to be sympathetic and kind. Exceedingly rare individuals feed off the more primal emotions of those around them, instilling fear, anxiety, or anger in their victims for their enjoyment. Nautolans with low Wisdom or Charisma scores have little self-control, leading their emotional state to be easily influenced by those around them.
Size. Nautolans average 5 feet 9 inches, but vary from 5 feet to just over 6 feet. Your size is medium.
Speed. Your base walking speed is 30 feet. You have a swim speed of 30 feet.
Amphibious. Nautolans are as at home above the waves as below them. You can breath both air and water.
Heightened Senses. Nautolans have eyesight, hearing, and olfactory organs adapted to detect subtle cues in the most hostile 3-dimensional aquatic environments. You have darkvision to a range of 60 feet, and gain proficiency with Wisdom (Perception) checks.
Naturally Empathic. The nautolan language involves detailed observation of body language and detecting emotional states through their scent receptors on their head-tentacles. You gain proficiency with Wisdom (Insight) checks. When you and another living creature are submerged in either fresh or salt water, you may double your proficiency modifier when making Wisdom (Insight) checks involving that creature.
Languages. You speak, read and write Aquan (or Nautolan if you wish to include it as a separate language) as well as one other language (typically Marine Trade or Common)

Nautolans are as adaptable as humans and possess the same range of potential backgrounds.

Nautolan adventurers are particular drawn to classes that combine physical and spiritual challenges, such as the cleric, paladin, and ranger classes. Just as with backgrounds, nautolan are drawn to a wide range of classes. Of course, the aquatic barbarian, cleric, paladin, sorcerer, fighter, druid, and ranger archetypes from the Aquatic Builds series are all excellent choices for nautolans, as are bards from the College of the Sea Singers.

EDIT: After further comparison to existing races, proficiency in Perception checks was added to the standard traits.

For more discussion about all things From the Depths, join us on the Tribality Forums.