Aquatic Allies: Karkinoi (aka What Makes a Race?) 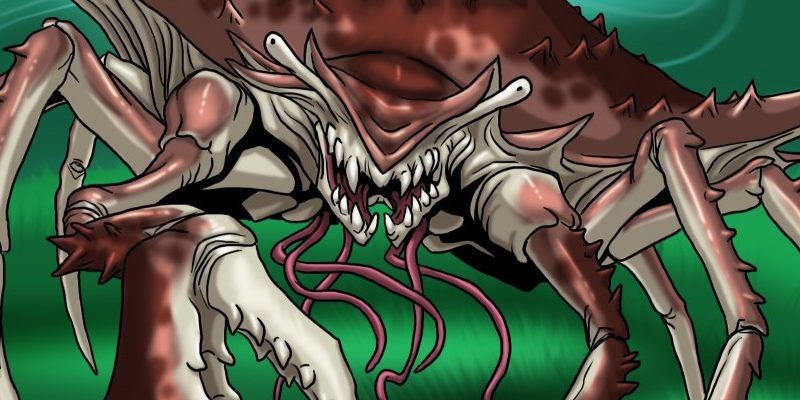 There are a number of excellent blogs and podcasts about creating campaign worlds, from our own Shawn Ellsworth’s World Building series, to James Introcaso’s World Builder blog, and the Dungeon Master’s Block Creation and Inspiration episodes. Not long after joining Tribality I had a number of readers ask whether I’d be publishing my own aquatic campaign setting. My standard answer was to aim them at the brilliant Cerulean Seas from Alluria Publishing. Why reinvent the wheel, I thought? Then someone pointed out that there are scores, if not hundreds of pseudo-European fantasy settings, so why can’t their be more than one aquatic one? They could not have been more right. I’ve since had the pleasure of playtesting aquatic races, adventures, and campaign concepts as I hammer out my ideas, including many published here on Tribality.

One of the first things I consider when creating a campaign setting is what races I’ll include. When you know what core races are active in your world, you can evolve cultures, cities, countries, politics, magic, history, and technology from there. An excellent example is J.M. Perkins’ Resenctia experiment where he creates a setting from randomly selected races. When you’re dealing with a standard, pseudo-European D&D setting, the default races in the PHB are sufficient, though the best settings will tweak expectations. Mitchell Connelly’s “Riders of Shemish” campaign takes place during a time where dwarves are a lost race. In the Gods Fall Actual Play podcast, Aram Vartian has decided that races in his world are unable to cross-breed, so half-elves and half-orcs don’t exist even though mixed-race marriages are still arranged for political purposes. J.M. Perkins’ “City of Salt in Wounds” setting includes all the standard races, yet allows ghouls to be citizens for both logical and twisted reasons. Tweaking expectations can give your world a unique flavor, even when using races players are familiar with. A setting outside the standard is a little more challenging.

Sea elves, selkie, merfolk, cecaelia, locathah, koalinth, sahuagin, and even lizardfolk, weresharks, and dragonborn are expected in an aquatic D&D setting. Pathfinder has hundreds of potential races to play, but the question is, are all of them necessary?

So why would we want to create a new race? What niche does it fill and is there a point where too many races water down (pun intended) the flavor of your particular setting?

When considering a new race for an aquatic D&D setting I have to consider three things:

I’ve made a number of sea elf PCs in my day. They are a solid way to bring both the familiar and different to a game, especially when the focus is on surface adventures with the occasional marine dip. Having said that, I’m not a fan of just slapping the words “sea”, “ocean”, or “aquatic” on a surface race and giving them gills. It’s important to consider the environmental advantages, disadvantages, and pressures that affect the evolution of species, magic, and monsters when taking your game away from the familiar.

For example, I know many players love dwarves. If I want to interest them in my game I should consider what it is about dwarves that draw players to them, then provide DMs with a parallel to entice those players into giving an aquatic game a shot. In my non-scientific survey, the following were top reasons players enjoy playing dwarves.

Keeping those things in mind, I consider what kind of animal or mythological creature fits those descriptions, and how I can make it familiar, yet different.

Karkinoi refer to two widespread subraces of crustacean-like sentients. Vulcanite karkinoi make their homes in and around hydrothermal vent fields, deep sea trenches, and complex underground cave complexes. The druids of their people are geologically minded, cultivating and growing hydrothermal vents and employing alchemical secrets to fix the rare minerals dissolved in the vents’ jets. Vulcanites are protective of their homes and secrets giving them a reputation for xenophobia, though individuals encountered outside of their communities are fiercely loyal to their friends and make staunch allies.

As their name suggests, the helio karkinoi live in complex coral reef communities and are rarely encountered deeper than 200 meters (the depth at which light penetrates). A cosmopolitan people, helios are often encountered as merchants, crafters, and socialites. Their ability to communicate telepathically with any sentient species makes them excellent diplomats and negotiators. Highly educated, helios are also drawn to scholarly, magical, alchemical, and psionic professions.

Ability Score Increase. Your Constitution score increases by 1.
Age. Karkinoi are born in clusters of 2-5 siblings, reach maturity at the age of 10, and live an average of 60 years. Even with their resistance to poisons, vulcanites who spend their lives cultivating the most toxic vent fields life much shorter lives, while helios may live as long as 80 with access to advanced medicines and magic.
Alignment. Both subraces of karkinoi are well-organized and reliable and lean toward lawful alignments.
Speed. 25 ft.
Size. Vulcanites are crab-like in appearance with dull-red, brown, or black carapaces that average 4 feet in height and 4 feet in diameter. Helios are more colorful in appearance, with longer, lobster-like bodies that average 4 feet in height and 5 ft. in length. Your size is medium.
Darkvision. You have darkvision to a range of 60 ft.
Carapace. Your AC cannot be less than 10 + your Constitution modifier (minimum 1) no matter what armor you are wearing. In addition, you have resistance to damage from fire/steam/heat.
Crafting Claws. You possess numerous small manipulating appendages that are excellent for fine work. You have proficiency in one artificer’s tool kit of your choice.
Multiple Legs. You have advantage on checks against being shoved.
Amphibious. You can breath both air and water.
Languages. You speak, read and write Aquan as well as one other language (typically Marine Trade or Common).

Ability Score Increase. Your Strength score increases by 2.
Speed. You gain a burrow speed of 10 ft. Your speed is not reduced by armor or heavy loads.
Blood Filters. You gain resistance to poison damage and advantage on saving throws against poison.
Pincers. You possess two large pincers used for digging, lifting, and self-defense. Your unarmed attacks deal 1d6 slashing damage and are considered light melee weapons. Strength checks made to maintain a grapple with your claws are made at advantage. You may lift and carry twice the amount normally allowed.
Bonus Language. Vulcanites speak and write vulcan, a unique language consisting of sharp-edged hieroglyphs and eerie echoing clicks generated inside air pockets they maintain within their carapace. The spoken version of vulcan is nearly impossible to imitate without magic, even by helios. 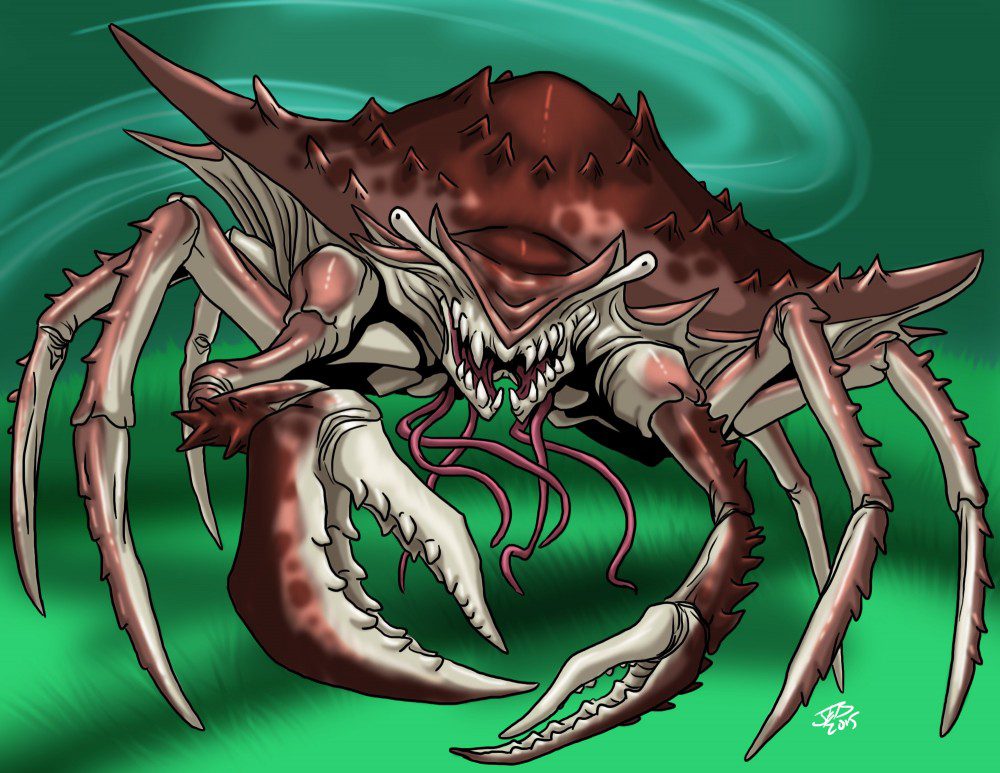 Ability Score Increase. Your Intelligence score increases by 2.
Speed. You gain a swim speed of 25 ft.
Communion. Helios are naturally psionic and may communicate telepathically with any single creature they can see or touch within 60 ft. They are not required to share a language with the creature, though the creature must know at least one language.
Iron Will. You gain resistance to psychic damage and advantage on saving throws against psychic damage.
Natural Psionics. Choose one cantrip from the list of wizard cantrips. You gain that cantrip and may cast it without components. Your spellcasting ability score is Intelligence. 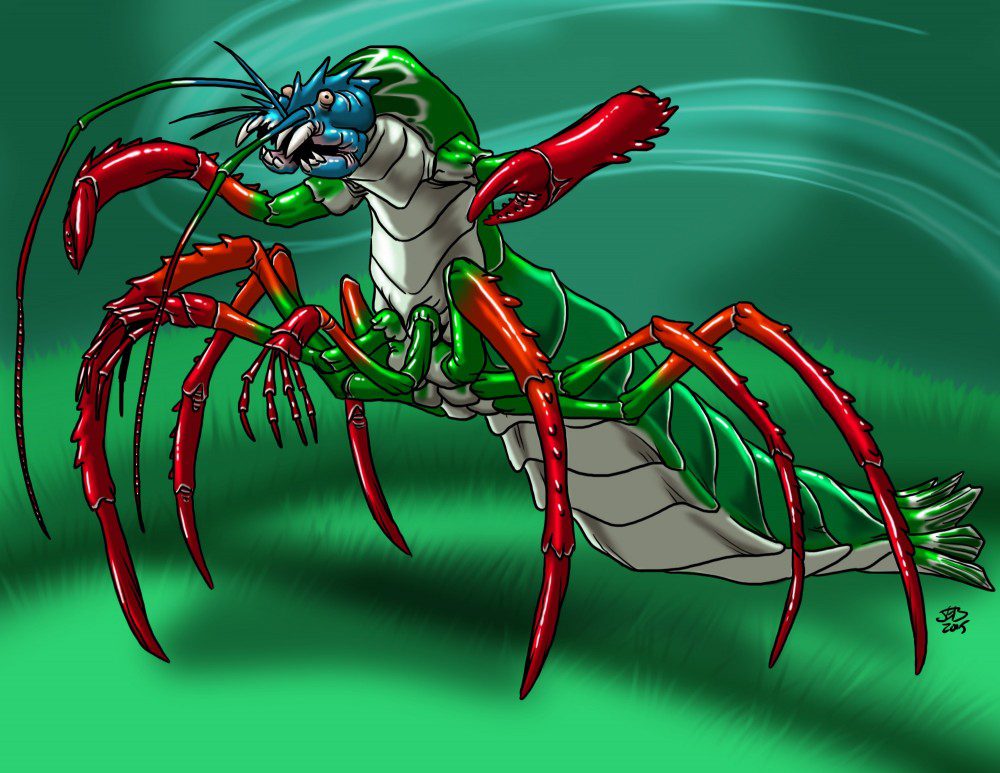 By putting a little more thought into the environmental pressures and origins of aquatic races, I was able to create a parallel for dwarf fans to connect with. Keeping down that path lead me to a parallel for high elves as well, reflecting the antagonistic relationship between the two surface races while giving my campaign setting a unique flavor of its own.