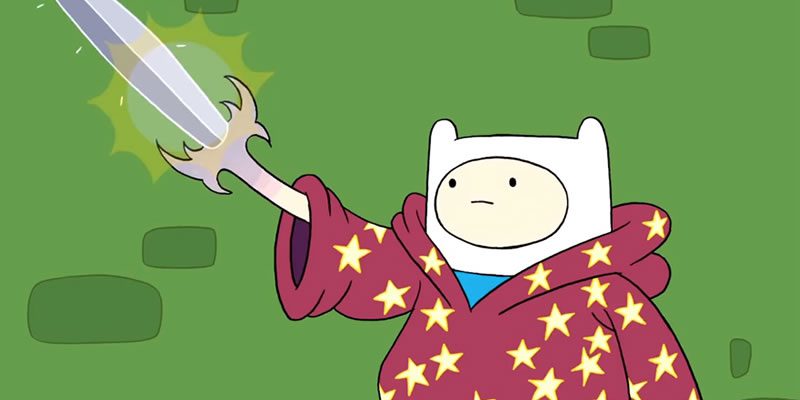 Being a regular watcher of the show Adventure Time isn’t required to play in this setting, but it really helps. Any of this material could be used in your own homebrew setting or to get started on playing a game in this setting.

I’ll be breaking this down into five parts and releasing another chapter each week.

In the show, videos games and comics we see a ton of magic weapons and items. Create your own unique magic items or have your adventurers stumble onto one of the following below. You should be able to come up with countless ideas from the show or your own imagination. I’ve provided full magic items for a few of them and ideas/outlines for the rest.

Before Finn destroyed it, The Enchiridion (which translates to “The Handbook” or “The Manual”) was an ancient book with codes of conduct, guidelines, and other helpful information for heroes and a source of great power. I’ll leave it to you to figure out what this can do in your game, but it is a great quest item for a hero.

This giant medallion necklace with a red (or green) eye at the center has the ability to create unlimited supply of extremely powerful doppelgangers of the wearer; these doppelgangers are impossible to defeat but still have the will and mindset of the wearer. According to trivia it apparently gives the wearer “+5% critical hit” too.

These magical glasses allow the wearer to become super smart, but there can be unintended consequences. While wearing these glasses you gain the following benefits:

Whenever you use the glasses you must succeed on a DC 15 Wisdom saving throw or take a level of short-term madness on a failed save. If the wearer succeeds on the saving throw, they do not need to make a save against madness again for the next 24 hours.

Gauntlet of the Hero

The Gauntlet of the Hero is a cosmic gauntlet and was the mythical weapon of renowned hero Billy and was thought to be the only weapon that could harm the Lich. When used, it could fire extremely powerful blasts of energy. When found it might yell the name ‘Billy!’ in a burst of shining light.

The gauntlet has 5 charges for the following properties. It regains 1d4+1 expended charges daily at dawn. While wearing the gauntlet you can cast Eldritch Blast by making a ranged spell attack.

While wearing this gauntlet you gain the following benefits:

This crown is golden, topped with three points and adorned with three red rubies and the source of the Ice King’s ice power. Also, one of the gems within the crown protects Ice King from the evil brainwashing spells of the Lich. The crown providers the wearer with the ability to create near limitless ice magic, but it should be easy to knock off the wearer’s head.

ADDED: The crown should start to create madness in the wearer after prolonged exposure (thanks WillofTheGods). D&D’s madness rules could work or just look to the show for ideas. 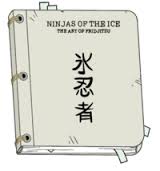 Ninjas of the Ice: The Art of Fridjitzu

This first edition text is kept inside a secret sanctum inside the Ice King’s lair. The book is a manual that teaches several ice or any kind of snow based attacks, most used to create hand weapons from ice. If you had a player who wants to play a monk or ninja (rogue – assassin), this could be an excellent quest item. For a player who finds this I’d provide them with some ice based unarmed attacks, the ability to create new exotic weapons or even give them some ice based cantrips.

Here are some additional magic items that you’ll be able to find in Adventure Time. Some of them are even in the the Dungeon Master’s Guide.

D&D’s Vancian flavored casting of spells matches up with how we see wizards using magic on Adventure Time. This is most likely such a close match since the series creator, Pendleton Ward, was inspired by his middle school games of AD&D. There are example of wizards casting cantrips and spells that have any of verbal, somatic and material requirements, while we see other characters able to simply use magic. We even see examples of ritual casting by Peppermint Butler and other characters.

Many spells that are cast on the show match up well with those provided in the Player’s Handbook. You should be able to create the type of magic user you want with the spells you want to cast. But if you want more… I’ve provide a few spells as ideas to get you started.

You gain a flying speed of 30 feet for the duration. You use your own name in place of the word “Ash” for the Verbal component.

At Higher Levels: When you cast this spell using a spell slot of 5th level or higher, you can target one additional creature, pass through solid matter (up to 5 feet thick) and increase your flying speed to 60 feet for the duration.

Notes: This spell is modified from Fly (PHB p. 243). It is used by Ash (Marceline’s immortal ex-boyfriend) when he grabs Marceline and quickly flies through the ceiling of her house and the out of the cave.

A willing creature you can touch gains resistance to fire damage for 1 hour.

At Higher Levels: When you cast this spell using a spell slot of 5th level or higher, you can target one additional creature.

Notes: It is used by Flambo on the show and similar to Fire Shield, but now you can share.

You play a catchy song and a human in range that can hear your song must make a Wisdom saving throw. If it fails the saving throw, it enters a state of dancing uncontrollably, and it is incapacitated until your spell ends or until you or your companions do anything harmful to it.

The following is a list of other magic spells and abilities demonstrated on the show. I’m sure I’m missed a ton, so let me know in the comments below if you think of anything to add.

Creates a transparent barrier of unknown strength around the user. It is used by Tree Witch.

These powerful magic phrases could be used by NPCs when they cast similar spells.

Forces the target to follow the user’s commands. It is used by The Lich and the King Worm. Similar to D&D spells such as Friends,

There are various examples of druid magic in the show.

While Adventure Time is a kids show, that doesn’t mean they are afraid of a little necromancy. We see both the Lich and Marceline bring dead bodies to life to be used as slaves.

During a surge or intense emotion, a powerful shriek can be performed by a being, but this is seen as a shameful form of magic.

Allows the user to grow and stretch their bodies. Used by Jake and Cake.

The ability to move objects by nonphysical means is used by Tree Witch and Goliad. Similar to the D&D 5th level transmutation spell Telekinesis.

Ability which negates any and all magic it comes into contact with. Used by Bella Noche. Similar to the D&D 8th level abjuration spell Antimagic Field.

It makes a wizard see into the spirit world continuously. It is used by Ice King and possibly Ice Queen.

Set of abilities granted to students of the Wizard Bufo, acquired by completing various tasks and challenges at the Wizard Village. The powers are referred to by their level, which coincides with the order they are acquired in and are stored in the robe of the wizard student learning them.

Next week we look at Traps, Hazards & Monsters for an Adventure Time D&D 5th Edition game.

I contacted Bloodghost directly to ask if there would be an update to the materials for 5th edition or if I could take a crack at it, but I didn’t receive a reply. I’ve borrowed heavily from Bloodghost’s ideas for this guide. ADVENTURE TIME and all related characters and elements are trademarks of and © Cartoon Network.

Errata for the Monster Manual and the ...