ColumnsD&D 3.5eHistory of the Classes 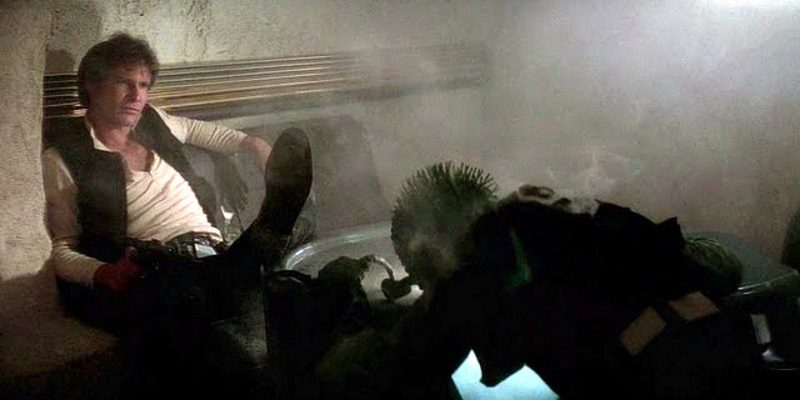 At last we come to the watershed moment of the Thief’s Rogue’s development, and I don’t just mean the name change. Up to this point, thieves have a role in combat, but that role is “mostly try to stay away, you’re terrible at combat unless you’re backstabbing.” That approach didn’t fit the source fiction when it was first implemented (cf. Gray Mouser); I’d argue that the thieves who were terrible at combat in the source fiction were terrible for reasons other than being thieves, such as hobbits being too small to be effective fighters until and unless there’s some sort of Witch-King emergency. I can’t back this up with, you know, data, but I suspect that the 90s saw a lot of new finesse-based knaves who can hold up their end of a fight, and this inspired the 3.0 designers to make the Rogue into something much more potent and varied than its predecessor.

Among its many changes to D&D, 3.0 knifed both the thief skill system and the secondary skills/non-weapon proficiencies system and bundled all of it into a single skill system, with a lot of room for PC customization through skill points. The ability to buy skills at cross-class rates theoretically promised players all kinds of possibilities, though at a remove of fifteen years, I’m comfortable saying that it delivered on that only half-heartedly. Many classes are so constrained on skill points that spending any of them cross-class is unthinkable, while the Rogue – who can probably afford it – has almost every skill in-class. The core of the problem is the perception, created by pressure from DMs and adventure writers who pushed DCs higher to maintain tension in dice rolls, that a skill that isn’t maxed out is barely worth having.

The Rogue walks away from the skill overhaul as the grand prizewinner – thirty-one class skills, 8 + Int bonus skills per level. This is clearly necessary for the character to cover even some of their traditional functions, but it also makes Rogue one of the two best first-level-class-dips in the game – an unintended patch on the fact that most classes have very few skill points and class skills. (Ranger is the other popular go-to here.)

Because everyone has skills and they’re standardized to a d20 + modifiers roll against a Difficulty Class, skill penalties for wearing heavy armor aren’t idiosyncratic anymore – every armor type has a fixed Armor Check Penalty and a maximum Dexterity bonus. As a result, there’s a whole metagame around stacking up modifiers and enchantments that reduce ACP and increase the maximum Dexterity bonus; it’s a significant source of power creep over the publication cycle of 3.x.

The other Really Big Deal is the change from Backstab to Sneak Attack. A best-case-scenario on Backstab might get you that damage multiplier every other round, maybe once every three rounds. In 3.x, you might deal your Sneak Attack damage several times a round. This turned rogues from largely combat-avoidant to agile murder machines. At 20th level, dealing base weapon damage + 10d6, up to five or six times a round, is not a joke. (It’s also not significantly outstripping a Power Attacking fighter, because 10d6 sounds like more damage than it really is.)

It has some huge weaknesses, though: 3.x Sneak Attack doesn’t work against anything that is immune to critical hits, which includes plants, undead, elementals, oozes, and constructs. Undead and constructs, and to a lesser extent elementals, are a real problem, because there are plenty of published dungeons that depend entirely on those creature types. There’s a great reason for this – they don’t eat or sleep, so they’re easy to explain in dungeons that have been abandoned or sealed up for thousands of years. On the other hand, it makes the rogue an all-or-nothing proposition. Late in the development cycle, the developers introduced workarounds, but they required deep system mastery and multiclassing.

On with the rest of the class:

The rogue’s combat capabilities are more or less on par with clerics in this edition, up until clerics get their serious damage and buffing spells that turn them into god-full killing machines. I saw a lot of different rogues played over the course of my 3.x campaigns, from rapier-and-buckler duelists to crossbow-wielders who were guaranteed to win initiative and put a hurt on one target to start things out. The most consistent through-line I saw was that they had a hard time contributing much in combat before about 5th level, as Weapon Finesse is a must-have feat for melee rogues, but it requires a +1 BAB, so the earliest they can get it is 3rd level (unless they multiclass into fighter at 2nd level, which really shouldn’t be necessary). 4e and 5e recognize this problem, and address it in their own ways – neither of which involve making the player spend a feat.

Even now it’s hard for me to get a lot of distance and perspective on the themes of the 3.0 rogue. Much like the feat-delivering fighter, the rogue feels more like a means to an end (skill points, Evasion, and Sneak Attack) than a thematically coherent class in itself. Let’s try “agile combat + skills + no magic.” Criminality is no longer explicit in any part of the mechanics or name, just a louche approach to physics.

3.0 also has assassins and thief-acrobats, both prestige classes. To touch on them briefly – the assassin is nominally available to non-rogues, but 8 ranks of Hide, 8 ranks of Move Silently, and 4 ranks of Disguise mean that it is very much targeted at rogues and bards. Their other requirement is making their bones – killing a target just to join the assassins. Their abilities feel like a slightly re-themed rogue, with a death/paralysis attack (a Fortitude saving throw that pushes assassins to have a high Int) and resistance to poison, but otherwise familiar progressions of Sneak Attack and Uncanny Dodge. Oh, and a minor spellcasting progression based on Intelligence. My 3.x games were never particularly friendly to Evil PCs, so there was never any particular discussion of someone taking this prestige class. If you did, I’d be interested to hear your stories of how it went.

The thief-acrobat shows up in Song and Silence, the 3.0 splatbook for rogues and bards. Over the course of ten levels, they give up three dice of Sneak Attack (that is, gaining +2d6 Sneak Attack rather than the +5d6 that a straight rogue progression would have granted) and two skill points per level in exchange for a lot of physical stunt features, many of them combat-applicable. They also ignore penalties for moving or fighting in awkward circumstances, though I’m guessing a lot of DMs don’t think to put PCs in those challenging situations nearly often enough to make these worthwhile.

There are several other prestige classes, of course, as well a lot of additional detail on poisons, traps, and thieves’ guilds. Since we still have 3.5 and its splatbooks to cover, though, I’m not going to dig down to the same level of detail as I did with the Complete Thief’s Handbook.

The 3.5 Rogue is very close to its 3.0 forebear. The skill system of 3.5 boils down 3.0’s list somewhat, but the rogue still gets the same number of skill points, so they are an even more dominant master of skill use. The other significant change is breaking Trap Sense out of Uncanny Dodge and moving it to low-level play, where traps are most common and threatening in dungeons. Uncanny Dodge and Improved Uncanny Dodge get bumped up in level slightly. I think that’s all.

The 3.5 Assassin picks up a Hide in Plain Sight feature, the supernatural ability to fade from sight even while directly observed if he is within 10 feet of some sort of shadow, other than his own shadow. They also get a boost in overall spell slots, and switch from learning and preparing spells like a wizard to knowing a fixed number of spells like a bard (but still Int-based). The assassin spell list expands slightly.

The thief-acrobat shows up in Complete Adventurer, trimmed from ten levels down to five – a good choice, because there’s just not enough there to spread out over ten. This is a close cousin of its 3.0 progenitor nonetheless, trading +3d6 of Sneak Attack progression and two skill points per level for improved movement and defense options. Not a bad little prestige class if your game involves challenges based on terrain – a good DMing best-practices note – but severely underwhelming otherwise.

There are a few other rogue-friendly prestige classes of the DMG that need a mention here as well: the Arcane Trickster and the Shadowdancer. The former combines the rogue’s Sneak Attack with an emphasis on control and utility spells (and ranged touch attacks that can benefit from Sneak Attack), while the latter elevates stealth and flitting between shadows to an art form, at the cost of almost all offensive improvement. But man, do they have style.

Oh, and there are ninjas in Complete Adventurer, because of course there are. Since there are monks in 3.x, the Ninja is a Rogue/Monk mashup class. The 3.5 version of the Ninja receives:

Freaky mystic ninjas that develop an ever-closer tie to the Ethereal Plane are cool, I guess. If I were to use a class like this, I’d want to dig deep into D&D’s conception of the Ethereal Plane and figure out what it means to have that kind of connection, and what it implies about ninja clans that they have it. I get the vibe of Whispers from Blades in the Dark off of this – yes, I know I’m on about BitD all the time, but only because it’s so damn cool.

The rest of Complete Adventurer is a long list of crunchy content, some of which has nothing at all to do with the book’s core concept. It’s just here to keep developing the metagame and increase the system-mastery value of the book so that more players will buy it. It’s a business model, what can I tell you. The best parts of the book are the shadowy organizations that carry their own pairs of prestige classes, like the Nightsongs, the Shadowbanes, and the Daggerspells. Giving each of these groups two prestige classes sets up partnerships within an adventuring party, and lets any use of those organizations feel like plot attention for more than one party member.

Alternately, it means that those organizations don’t only appeal to the rogue – you might only have one Shadowbane character in the party, but it’s the paladin, who class-dipped into rogue just to qualify. The prestige classes and feats of this book are about supporting, which is to say requiring, complex multiclassing.

The Rogue makes a quantum leap forward in shifting from 2e to 3.0, but sees very little change from 3.0 to 3.5. Rogue-related concepts start to flourish – there’s not only the Ninja, but also the Spellthief, the Scout, the Beguiler, the Factotum (keying off of themes of skill use and adaptability… it’s the be-anything class), and the Swashbuckler. Each of these takes one element of the rogue’s theme and spins it into a 20-level progression. Only a few elements of the Swashbuckler are going to stick with the Rogue into 4e, though.