ColumnsD&D 4eHistory of the Classes 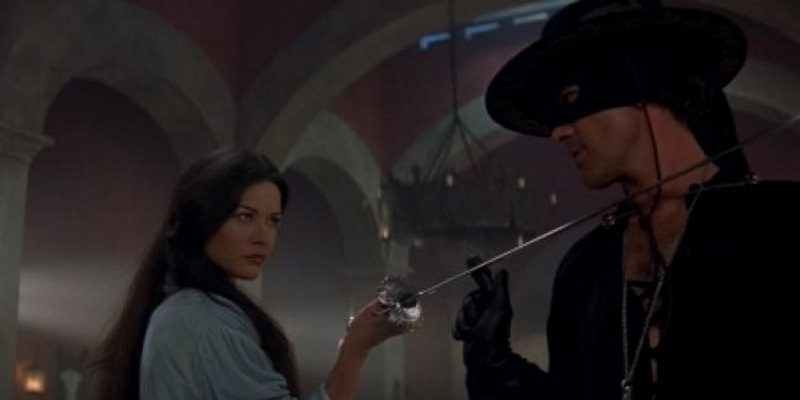 In last week’s History of the Rogue, we saw the shift from fragile rogues who should stay clear of combat as much as possible to agile murder-machine rogues. This shift isn’t to everyone’s taste, but I think for most people it makes the rogue feel more like an action hero, on par with fighters, barbarians, and so on. It’s a good class choice for a swashbuckler – and 4e takes that idea and runs with it.

The Rogue class of 4e emphasizes the agile, deadly combatant even more than 3.x does. It is one of two martial striker classes, but where the Ranger has a split between Strength and Dexterity for melee or ranged combat, the Rogue uses Dexterity for everything, melee or ranged. In initial-release 4e, where all fighters are defenders, the rogue is a go-to option for swashbuckling duelists. The rogue’s attack power options for rapiers are especially cool and on-theme, and it’s a character I always wanted to play but never got around to trying. (Most of my 4e experience was on the DMing side, and three of the five or so characters I played were defenders because it’s what the party needed.)

The class lives and dies by combat advantage, and I’ll be using those two words a hell of a lot in the next little bit here. In case you never played 4e, combat advantage grants a +2 bonus to attack rolls, so it’s useful for everyone, but it also triggers the rogue’s most important mechanic: Sneak Attack. In addition to powers that specifically cause an enemy to grant combat advantage, attackers also gain it when the defender is balancing, blinded, climbing, dazed, flanked (4e still requires that the two attackers be 180 degrees around the target from one another), helpless, prone, restrained, running, squeezing, stunned, surprised, unable to see the attacker, unaware of the attacker, or unconscious. That’s a lot of sources to keep in mind, but fortunately they’re pretty intuitive.

Here’s what they have going for them:

As with other 4e classes, there are far more powers here than I can discuss in detail. Some of the definitive rogue tricks that deserve mention are weapon strikes that target Reflex rather than AC, easily communicating a blade that slips through chinks in armor, or attacks that target Will, for in-combat deception. More so than a lot of classes, I feel like a rogue’s selection of at-will attacks defines a fighting style. (This is because a lot of the classes I’ve covered in this column have split-stat issues and don’t really have choices for their at-wills – sorry, rangers, paladins, and warlocks, and druids in a different sense.)

At higher levels, the rogue runs into the same problem as the ranger – the martial power source doesn’t really have enough that it can do without crossing the line into blatant magic, and all of the attack power start to blur together into forced movement, bleed effects, and various ways of saying “enemy grants combat advantage.” Their utility effects offer a lot of functionality for non-combat encounters, and a rogue who cared to do so could really shine in a skill challenge. Even without preparation, six trained skills mean you have good odds of doing something useful in just about any challenge.

Thematically, 4e’s rogue is a more ambiguous creature than even the 3.x rogue – there’s so little unifying rogues that they’re a fighting style and a skill list more than a common identity. It’s good for a root concept as general as “rogue” to adapt to almost any conceivable intention, but more than other 4e classes, it’s up to the rogue’s player to assign it meaning.

It’s a little more complicated to talk about the assassin. First off, the Shadow Assassin is a paragon path for rogues… among many paragon paths that sell roughly the same concept. There’s also the Assassin, the striker for the shadow power source. For the sake of my sanity, I’m only talking about the latter. The shadow source makes this assassin explicitly magical, though the magic is often less flashy than other 4e spellcasting classes. The class was released in an online issue of Dragon Magazine, and as such is hard to get in any useable form now if you didn’t get it way-back-when.

The assassin’s powers thereafter focus heavily on positioning, picking the right target, and murdering the crap out of your target once you decide it’s time. Honestly, “assassin” is kind of an odd name for this class; it’s a shadow-sourced rogue, but everything they do is explicitly magical, and in a lot of ways it’s more like playing a free-willed undead than most D&D-based game experiences. It’s not exactly a coincidence that the Revenant race was closely linked to and ideally statted for the assassin. In the balance, I liked seeing 4e go a little further afield with its class concepts, though the Vampire class is, for whatever reason, still a bit much for me. My wife had a pretty good time playing an assassin in my 4e campaign.

There’s one other class that really deserves mention here, but I’m pushing off my analysis of it to a future article. The Avenger is one of my two favorite classes on theme and mechanics in all of 4e. It’s basically a cloth-wearing killer-for hire with, you know, some sort of ethos or code of behavior – the divine striker.

Incidentally, the thief-acrobat also shows up in 4e as the Daring Acrobat, a paragon path. I should really refine my criticism of the Rogue’s thematic blandness – the game really says that the rogue could be anything up to 11th level, at which point they make a new, strongly defining choice with their paragon path, and again at 21st level. The paths are indeed tightly themed types of rogues, though a huge number of them boil down to trying to be the best in the world at light-blade-related casualties. A quick count on a handy-dandy 4e wiki shows twenty-six rogue-oriented paths. For most of them, you wouldn’t have to squint too hard to find their 3.x prestige class or 2e kit ancestor. Friend Computer and I are both disappointed that none of them are Troubleshooters.

The Essentials rogue build, called the Thief, is all about its basic attacks, like other Essentials weapon-using classes. On top of the glorious murder potential of Sneak Attack, they also have more damage kickers.

The Thief has a lot less to do with thieving, and a lot more to do with weapon-induced facial murder. Most of the conversation about it online dwells on just how nuts it is, and how straightforward the class is to play. If anything, it sounds like any flavor a Thief character possesses must come from the player’s effort – there just isn’t much there in the mechanics. It’s an agile murder machine with a few creative ways to move or evade the enemy each round.

Mechanically, there are few clear connections between 4e’s rogue builds and 3.x or 5e. The most important development between 3.x and 4e is toning down Sneak Attack and making nothing intrinsically immune to it, so that the rogue isn’t an all-or-nothing stabbing class; 5e adopts 4e’s once-per-round Sneak Attack, but makes it once-per-turn. So similar, yet so crucially different! The Rogue’s Trick feature is a distant cousin of Cunning Action, as well – a special bit of movement or evasion that is part of every round’s actions. Other than that, 5e is a very close reinterpretation of 3.x, skipping over 4e.

There’s also an Executioner Assassin from Heroes of Shadow, but I’m totally finking out of writing about it in this article. Here’s the deal – if it is totally your Favorite Thing Evar, tell me why in the comments and consider throwing some money at Tribality’s Patreon. It just might be part of the prophesied Rogue Class, Part Six.