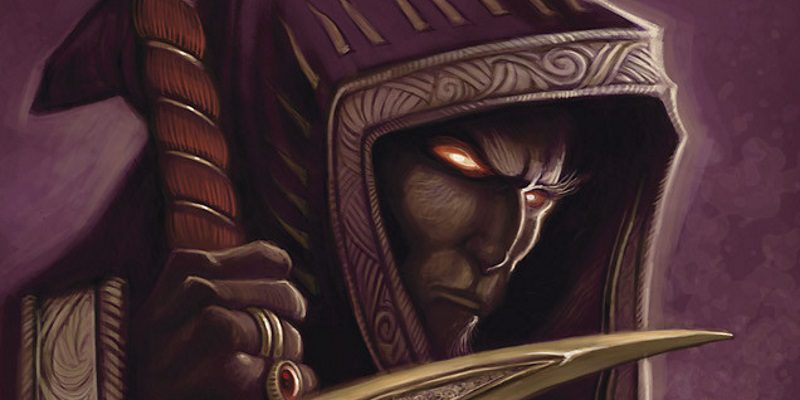 In last week’s article, the fifth part of the History of the Rogue, I ended by saying I planned to write about the Avenger this week. It’s a class name that dates back to the Rules Cyclopedia, and a concept that comes to us from Al-Qadim, but only in 4e does it receive a full treatment as an independent class. Though the essential theme is quite narrow – divinely-powered assassins – the Avenger has so much style that it hurts, and it is one of my favorite classes in the whole edition.

Way back when I wrote about the History of the Paladin, I mentioned the Rules Cyclopedia’s anti-paladin Avenger. It’s clear that these guys show up and murder… kind of whoever… all up in the face; that’s OD&D Chaotic alignment for you. Other than a likely preference for big swords and dabbling in divine magic, this Avenger doesn’t have a lot in common with what comes after.

First off, I have to admit that leaving the Holy Slayer out of my article on the 2e Thief and Assassin is an egregious oversight, but… folks, 2e was the edition of record for eleven years and TSR published a completely insane amount of content in that time. On the other hand, the new Dungeon Master’s Guild means that fans can update Al-Qadim to 5e (as Stands-in-Fire is already doing in his blog), so this wonderful setting should be on everyone’s radar.

Al-Qadim’s holy slayer draws on the real-world order of the Assassins, just as that one video game franchise does. Interestingly, they are described as antithetical to paladins, just as the Avenger of the Rules Cyclopedia is – but both groups use violent means to defend Zakhara from its enemies, powered by religious zeal.

Now, the holy slayer is a kit for the rogue class, not a class in itself. They receive the following benefits:

Their drawbacks are hard to resolve with group gameplay:

The flavor text of the holy slayer sounds frickin’ awesome. I mean, who hasn’t wanted to play the secretive Left Hand of God in a game? It would even be interesting, in some games, to keep one’s kit and motivations secret from the rest of the group, though you might be off the team or in a PvP showdown if you get outed. There’s a lot of text in the write-up laying out the order’s response if and when a PC disobeys or “creatively” completes a mission. At least to me, the kit describes a character that needs a long conversation with the DM before the start of play.

What I like most about the kit is that it specifically puts the lie to Gygax’s assumption in the 1e PHB that assassins do what they do for money rather than belief. (Do I need to point out that killing people out of religious zeal is one of those things that is interesting in a game and absolutely terrible in real life? I hope I don’t, but just in case, here it is.)

There are a few relevant prestige classes for rogues with strong religious convictions: the Divine Seeker of the Forgotten Realms Campaign Setting, the Shadowbane Inquisitor and Shadowbane Stalker of Complete Adventurer, and I’m sure there were others as well. They’re all right for what they are, but I don’t know that any of them quite embody the themes that will become 4e’s Avenger. We can give them a miss.

In the year before 4e’s launch, Ubisoft Montreal released a video game with what can be best described as a religious ninja in white that fights people claiming to be holy knights. Al-Qadim’s holy slayers versus paladins, or Assassins versus Templars. This franchise did all right for itself; you may have heard of it. I don’t mean to accuse 4e of being derivative, but let’s be real: Western pop culture has so thoroughly looted D&D at this point that D&D is stealing from properties that wouldn’t exist without it.

The Player’s Handbook 2 gives us a cloth-armored holy warrior. The cloth-only restriction is interesting, and the Avenger’s two secondary stats are Dexterity and Intelligence, so their AC will be all right with Armor of Faith. I love the visual, and the contrast from all of the other classes. Let’s break them down:

The avenger’s at-will, encounter, and daily powers are also uncommonly stylish. It looks this way to me in part because I’ve been neck-deep in the repetition of the ranger and rogue classes, so the freedom of the divine power source gives the designers lots more room for variety – but they’re pretty great anyway. There are powers to punish enemies for hitting you (avenging echo, because every striker needs de-taunts), the standard run of forced movement (overwhelming strike), self-heals (renewing strike), and some great zone-based effects (temple of light, for even more damage-kicker goodness). These are all first-level powers – the rest of their powers are just as flashy.

The theme that comes through in their powers is that they tread the line of what is holy and what is forbidden, which is also called out in their flavor text. This vision of the holy slayer may be rejected even by the mainstream church of the god she serves. (Interpretation as a metaphor for jihadists is… subtle like a hammer to the forebrain, but the veil of fantasy over the whole thing protects it from being outright tasteless.) Powers like temple of shadow, sigil of Carceri, and sigil of damnation point to just how cold and dark the avenger can be, even in service to nominally Lawful Good deities. Further, a sidebar notes that avengers can continue their service while disillusioned – an unaligned avenger can serve any deity.

Since this is to be my one article on the Avenger class, I need to go ahead and talk about where its concepts show up in 5e. The Oath of Vengeance paladin is the primary descendant – it loses the cloth armor element, but then 5e treats cloth armor as no armor. That Oath’s two Channel Divinity options hammer home the connection – Abjure Enemy and Vow of Enmity. For that matter, Relentless Avenger is a close cousin of several avenger attack powers, and Avenging Angel is more or less the same as some avenger paragon paths, like the Unveiled Visage or the Favored Soul. The Oath of Vengeance additions to the paladin spell list help too, starting with hunter’s mark.

All told, though, the avenger’s concept is alive and well, and I’m a pretty happy camper.