Last year I talked about the D&D Dice Masters game, and coming in February WizKids will be releasing the second installment of D&D Dice masters called Faerûn Under Siege! Dice Masters is a quick game that uses dice to build a force that you then attack the other player’s army of dice.  It is very similar to Magic the Gathering where you have choices in your dice & cards and you build your own collection of cards versus your opponents. But there is a random factor that you don’t necessarily get in MtG game from rolling dice. The game is a collectible with random expansion dice packs at 1$ each. Each foil packs come with 2 sets of dice and their corresponding cards.

You can download the rules here: http://wizkids.com/rules/DDDM1_Rules_WEB.pdf, and there are videos on Youtube that explain how to play the game.

Here is WizKids’ copy for the game description:

WizKids is pleased to announce the February 2016 release date for the newest product in the Dice Masters line of collectible dice-battling games – Dungeons & Dragons Dice Masters: Faerûn Under Siege. The new Starter Set includes 44 dice to collect and battle with in head-to-head fantasy combat. People who enjoyed the unique feel of Dice Masters: Battle for Faerûn will find more of what they loved in this release.

The Faerûn Under Siege collection expands deeper into the Dungeons & Dragons Forgotten Realms with new adventurers, monsters and keywords. Players will be excited to see the addition of well-known Dungeons & Dragons characters such as the dark elf Drizzt, the legendary dragon Bahamut, the insidious demon-queen of spiders Lolth and the demon lord Orcus.

You can see an entire review of the upcoming Dice Masters: Faerûn Under Siege starter set at The Dice Tower You Tube Channel: 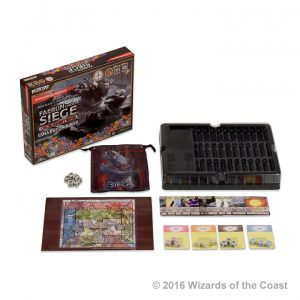 There is also a Dice Masters Faerûn Under Siege Collector’s Box allows players to collect and assemble their “party” of character dice and battle in head-to-head game play. 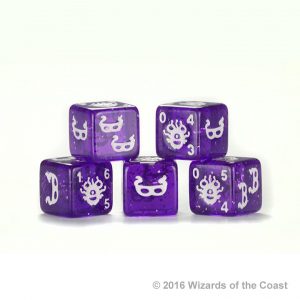