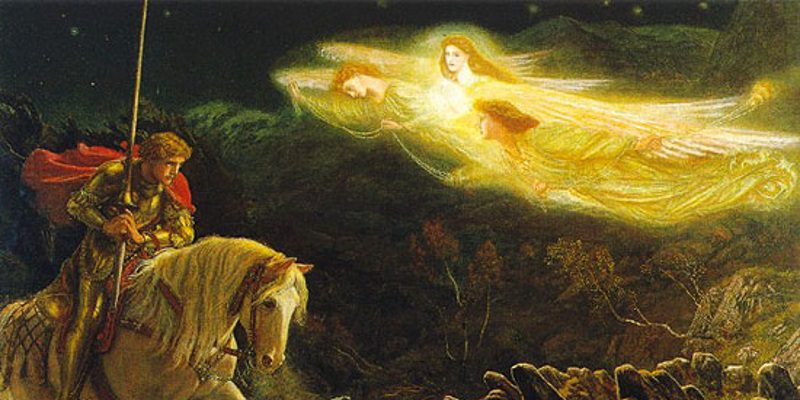 In the 5e Monster Manual, we find many of D&D’s traditional fey – pixies, satyrs, and sprites, among others. This… falls a little short of both the variety and threat level I would like to see for the fey. I mean, the Archfey are potent on a level with the Nine and the Great Old Ones, judging by their significance as warlock patrons. This article, which might become a series, introduces a variety of higher-ranking fey creatures. There is also a knightly order (intended to be one among several) for those who serve the Archfey. This is going to become real obvious, real fast, but: I love me some Changeling (Dreaming, Lost – both awesome.)

Fey knights wander the Feywild, the Material Plane, and other places as they undertake quests for their lords, the Archfey. When not traveling, they defend their lord’s palace, or the halls of their lord’s vassals.

Pride drives fey knights to seek glory in battle; they rarely refuse any challenge that they have any hope of succeeding. They are the flower of fey chivalry, punctilious in manners and exquisitely refined in bearing.

Fey knights are quite similar to high elves in appearance, but with an otherworldly sheen to their skin and a palpable aura of majesty that few high elves can match.

Pride and Prejudice. Their lords have granted them status and the possibility of promotion. Fey knights zealously uphold the honor of their liege lords, making them quite difficult to suborn. Those who do not conform to the fey knight’s conceptions of beauty, honor, or grace encounter their legendary hauteur instead. They live according to the rules of an immortal court, not the conventional laws of mortals.

Decorated with Honors. Fey knight belong to one of several different knightly orders sponsored by the Archfey. The fey knight shown below belongs to the Order of the Silver Birch, signifying diplomatic training and an affinity for cold, lightning, and thunder. Each order has its own badges of membership and rank, with powers of their own (typically a 1st-level defensive spell).

The fey knight’s medal always dissipates when she is incapacitated or slain, if she was defeated through treachery. If defeated through force of arms in mass combat, the medal remains, but at least half of the time it is rendered powerless. Only when a fey knight is defeated in an honorable challenge of single combat is the medal likely to stay behind and unchanged.

Order of the Silver Birch Medal

When a creature openly wearing this medal and attuned to it rolls initiative, the wearer receives an armor of Agathys effect, as if cast with a 3rd-level spell slot. Furthermore, the wearer may choose to use Charisma in place of Dexterity for her initiative roll.

Attuning the Order of the Silver Birch medal has an additional requirement: the creature must have either personally joined in defeating the medal’s previous bearer, or must have received the medal as a reward from an Archfey. If neither of these are the case, the medal vanishes, returning to the Archfey’s palace in the Feywild. Successfully attuning an Order of the Silver Birch medal entitles the bearer to full membership in the Order, including the hospitality of the Archfey’s palace, so long as the wearer accepts the duties and prohibitions of vassalage.

The Order of the Silver Birch

The Order of the Silver Birch serves a Seelie warrior Archfey (in my campaign, known as Rathmorvan, He Who Cleaves with Silver; in default Feywild cosmology, possibly Oberon). Many paladins who swear the Oath of the Ancients find their way into the Order of the Silver Birch. The Order’s Archfey particularly supports the second and fourth of those oaths, sending knights-errant far and wide to advance the goals of the Summer Court, and fight against the fear and despair of the Winter Court. Mortals who join the Order of the Silver Birch find that it is difficult to advance within the ranks, as the fey have no concern for the lifespan limitations of mortals; at the same time, they value and reward mortal dynamism.

Beneath the Archfey, there are knights-champion (generally one senior and five junior), who interpret the Archfey’s will and stand in the Archfey’s stead against the strongest of challenges; banneret knights, who have the right to lead common soldiers in battle and maintain their own manors in the Feywild; and bachelor knights, the lowest grade, who serve in the Archfey’s palace and undertake the greatest number of quests. The stats shown above represent an average fey bachelor knight; for a banneret knight, advance the stats to CR 10, and for a knight-champion, 14 or higher.

The specific duties and prohibitions of the Order of the Silver Birch should reflect the otherworldly nature of the Order and the Archfey, though spelling them out in detail is well beyond the scope of this article. Proper care of horses and gear certainly appear on the list, as the Archfey expects knights of the Order to reflect his or her honor and glory at all times. If you expect PCs to join the Order in your campaign, the rules should be more stringent and complicated to follow, but (wherever possible) affect only the knight’s gameplay, not the whole party’s. It would be a shame to introduce something like this without an equal and opposite Order for the Winter Court, of course! Knights need rivals almost more than they need horses.