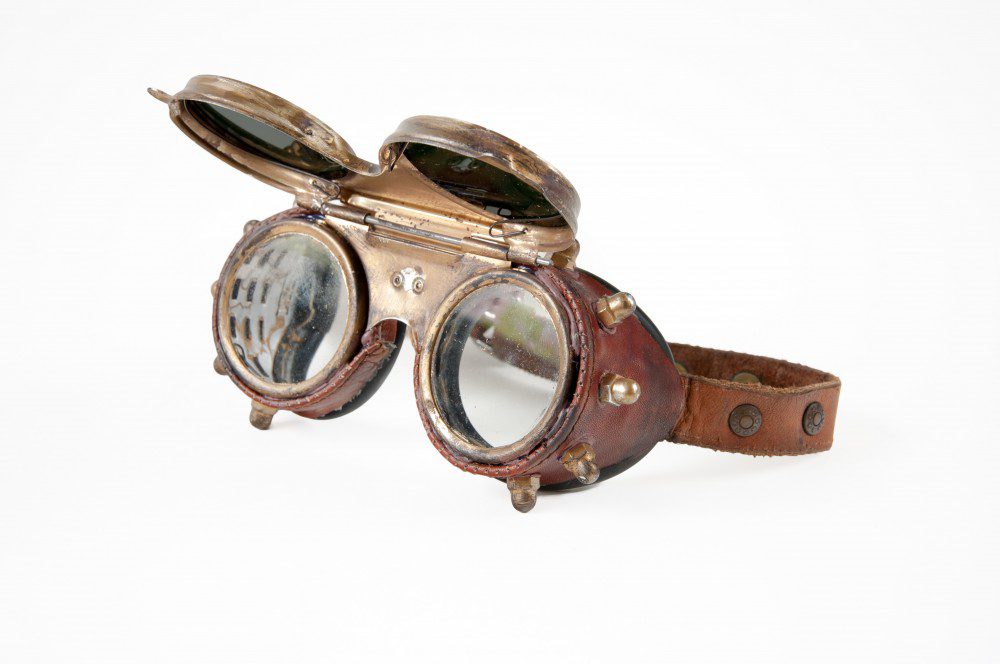 Back in February, on the Campaign Trail, I looked at Steampunk Weapons and Steampunk Armor for D&D 5th Edition. My homebrew setting and a one-shot adventure I just ran (exciting news here soon!) both contain steampunk inspired tech. This week I look at Steampunk Equipment for D&D 5th Edition. You can provide these lists of Adventuring Gear and Tools to your players to add some steampunk options for your fantasy world or use them to help create your own Steampunk themed campaign.

Steampunk is a genre of speculative fiction, most often set in an alternate/anachronistic Victorian setting, usually with elements of science fiction, fantasy or horror themes. Steampunk inspired characters are a little different than your regular ole fantasy builds. The following options might fit well into your steampunk themed adventure or world. By the beginning of the Victorian Era, the weapons, armor and equipment shared little in common with the sword and heavy armor of the middle ages.

The following is a list of some new adventuring gear for a steampunk adventurer to add to great items already in the Player’s Handbook like alchemist’s fire.

Compass: A tiny, simple with a pointer that always points north. All Wisdom(Survival) checks made to determine location and direction using a compass are made with Advantage.

Goggles: A pair of goggles can block out the soot and wind while traveling or protect the vision of the wearer from smoke, sparks and other hazards. They also help your character look the part.

Hat: A hat comes in a variety of looks such as the popular bowler, top hat, cap and bonnet. Hats are worn on the head as often for sun protection as for style.

Ink Cartridge Pen: A pen that does not require a bottle of ink to dip into, since the ink is stored in a cartridge inside the pen.

Lighter: A lighter holds a small amount of a flammable substance ignited by a flint striking metal, similar to a firearm. Its flame lights a 5-foot area as a candle does but it burns for 3 hours. A single flask of oil can refill two lighters. It is much easier to light fuses with a lighter than with any other source of flame.

Match: An alchemical substance on the end of this small, wooden stick ignites when struck against a rough surface. Creating a flame with a match is much faster than creating a flame with flint and steel (or a magnifying glass) and tinder, although not as fast as with a lighter. Lighting a torch with a match is a standard action (rather than a full-round action) and lighting any other fire with one is at least a standard action

Photographic Camera: A handheld device with a protruding lens on the front. It is used to capture a static image, or snapshot of what is in the view of the lens onto a plate.

Photo Plate: A metal plate that holds a special paper used to capture what is exposed by the photographic camera lens. The captured image provides a perfect rendition of what opening the lens revealed, but without color. To develop a photo plate you must be proficient with the alchemist kit.

Pocket Watch: A circular device stored in a metal case used to provide the exact time of day, linked to a chain that is stored in a waist pocket of a jacket or vest.

Smokestick: A wooden stick that is alchemically treated to instantly create thick, opaque smoke when ignited. It emits a cloud of smoke in a 10-foot radius. The stick is consumed after 1 round, and the smoke disperses in one round.

Tool/Utility Belt: A sturdy belt made from leather with numerous covered pockets to hold small tools and supplies, making it easy to keep about 10 pounds of items on hand.

Wristwatch: a device worn on the wrist used to provide the exact time of day.

The following is a list of new tools that a steampunk adventurer could choose to be proficient in. You can add these tools to the great tools already in the Player’s Handbook like Smith’s Tools and Tinker’s Tools.

Chemist’s Supplies: This kit provides a portable chemical laboratory which includes the tools and components necessary for mixing and analyzing acids, bases, explosives, toxic gases, and other chemical compounds.

Investigator’s Supplies: This kit provides a portable investigator kit which includes the tools and components necessary to collect and analyze evidence in the field with materials including clean containers, labels, gloves, tweezers and swabs.

In a Goblin Market