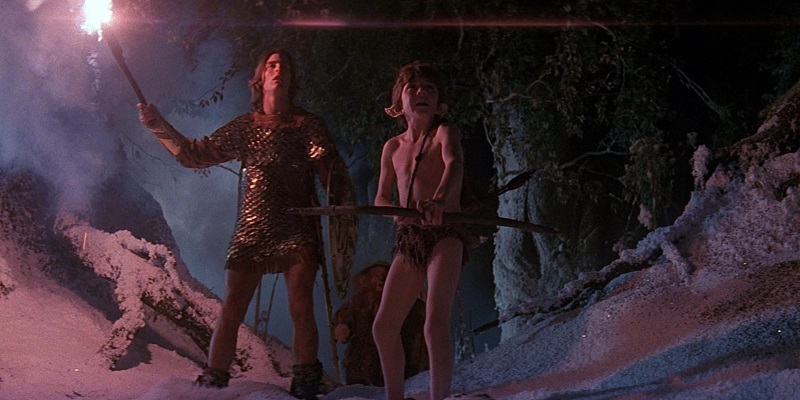 By request from a reader, today’s article is about the magical weapons that the fey wield, or that the Archfey grant to their leal servants. This week should have returned to Domain Rulership, but I’m stalling on that for a week, just in case Mearls releases an Unearthed Arcana that is all about late-game play, how to spend filthy lucre at high levels, and domain play next week. Also, Colin did some great work with fey magic items in a recent EN5IDER article, so if you’re an EN5IDER patron, check it out!

During D&D Next’s development, they released magic items that had a Secret. Once you learn or accomplish the special thing that the item requires, it picks up additional features. I love this, and I am sad that it didn’t make it into the DMG. As it happens, I first wrote several of these items during the public playtest, so I wrote them with Secrets, and I am keeping those features here. In many cases, I don’t define the “answer” to the secret, so that DMs can adapt that to their needs and not have the mystery spoiled for players who read this article.

To learn a weapon’s secret, either cast legend lore and learn to decipher its riddles, or bargain with a fey for the truth. A suitably challenging series of Arcana checks might get you somewhere too, especially if you had a library well-stocked in legendry.

Woven from the hair of the drowned, this net has been enchanted by the Sea Hag. With it, she steals away lost and forgotten things, drawing more things into her dominion.

This magic net requires a DC 15 Strength check to escape, has an AC of 15 against attacks made to cut it, and requires 15 points of slashing damage to free a restrained creature. If the net is cut in this way, it repairs itself during your next short or long rest.

When a creature is restrained by this net, you may spend a bonus action on your turn to steal memories of your target from its allies, causing severe mental strain. Up to six of the target’s allies within 120 feet and line of sight must roll DC 14 Wisdom saving throws; on a failure they suffer 2d6 psychic damage, or no damage on a success.

As a bonus action, you may cast detect thoughts on a creature restrained in Ebb Tide, without expending a spell slot. Once used, this power recharges at the next low tide (1d12 hours).

Secret: If the wielder loses something of great value to the Sea Hag, or steals something of great value from her, Ebb Tide gains an additional +3 to its Strength check DC, AC, and required slashing damage to free a creature. You may also cast bestow curse on a creature restrained in Ebb Tide, without expending a spell slot. Once used, this power recharges at the next low tide.

This axe strikes deepest when it scents a creature’s lifeblood. The Mother of Redcaps awards these to ancient redcaps that are battle-scarred – even maimed – and looking for a final, glorious victory. Such a weapon is terrifying in the hands of a redcap, though it is quite effective in mortal hands as well – which might be the Mother’s goal in the first place.

This magic weapon deals an additional 1d8 damage to a creature whose current hit points are less than its maximum hit points, up to once per turn.

Secret: In the hands of someone who has eaten the meat of a freshly-slain member of their own race, the Glutton’s Cleaver gains an additional power. After it deals damage, a target creature with 10 or fewer current hit points is slain instead.

Grisigon Tambrith and Drussea the Alchemist created the first musket and the first blackpowder, respectively. Grisigon’s creative process was a bit unusual; he had been laboring in vain to design and fashion the mechanism for nearly two years. One night, he was visited by a mysterious stranger, a woman who was almost completely shrouded by a gown and shawl of midnight blue. At first it seemed to him that she wore gauntlets, or gloves of silvery leather, but when her hand clasped his, he realized that it was her skin itself that was mirror-bright metal, but the palms of her hands were marred as if by many cuts.

He asked what she wished, and why she had come to his workshop at this late hour (though he was still at his labors). She replied, “I can reveal to you the answers that you seek.”

Suspicious, he asked, “You have learned the making of this weapon? Why would you share such a secret?”

She replied, “Is it a weapon? I care only for the steel itself, and its shaper. Your hammer cannot yet make what your thought shows you, but I can school your hands to shape the metal.”

Grisigon remained suspicious, but her confident manner eroded some of his reluctance. “What price would you have of me?”

But the answer has been forgotten. Grisigon accepted, and with her aid he shaped with his fingers what his hammer would not shape: the striker of the first musket. Instead of leaving his thumbprint in the steel, the striker is marked with a rune of power, repeated in several places. Thus Grisigon’s first musket became one of his greatest creations, and ever after, neither he nor any other gunsmith found it unusually difficult to form the striker correctly. In the centuries since, Grisigon’s Thunder has become known simply as Grisigon.

You gain a +2 bonus to attack and damage rolls made with this magic weapon. It is incredibly difficult to damage or mar; if it can be destroyed, no one has yet found the means. The runes of the striker and the marks of Grisigon’s tools on the barrel glow with fiery light whenever the weapon is near a functioning forge.

Grisigon’s Thunder has five charges for the following properties.

Secret: If the wielder learns the nature of the price that Grisigon paid to the woman, the weapon gains additional power: it deals an additional 1d10 psychic damage to characters with the ability to cast cleric or paladin spells.

These two weapons are estocs (using rapier statistics) that represent the Throne of Summer and the Throne of Winter. They are meant to fight one another twice a year, at the equinoxes, in the hands of champions chosen by the Queens. It is not uncommon for one Queen to choose someone willing to fight for her Court, and the other to choose someone sympathetic to their nature but not affiliated with the Court, such as a mortal.

Both of these magic weapons grant a +3 bonus to attack and damage rolls. As a reaction when you are hit with an attack, you may apply your Charisma modifier as a bonus to your AC against that attack.

Midsummer deals an additional 1d8 fire damage on a hit. When you take the Dodge action while wielding Midsummer, you immediately end one condition on you for which you would receive a saving throw at the end of the round. You may not use this power more than once in any round, or in consecutive rounds.

Midwinter deals an additional 1d8 cold damage on a hit. When you hit with an attack, you may choose to lose hit points equal to your level, or twice your Challenge Rating if you do not have a level. If you do so, your target must succeed a Charisma saving throw against DC 15 or gain one condition that is currently affecting you. For as long as that condition affects your target, and your target is alive and conscious, you ignore the effects of that condition.

Secret: When Midsummer and Midwinter are wielded against one another, in a duel or in battle, the victor’s maximum hit points increase by 10 as long as they remain attuned to the weapon, until the next equinox. If the loser survives or is resurrected, their maximum hit points decrease by 10 until the next equinox. If there is no clear victor, the Queens intervene and force a battle to some conclusion.

Now Sorilka is one of the best fey knights serving Rathmorvan, the Silver Knight, He Who Cleaves in Silver. From time to time, she grants her blade to a mortal that she believes will serve the Silver Knight’s purposes, whether through intentional service or simply the path of whatever they were doing of their own will. In this way it came to one of the PCs in my campaign.

At the time she gave him the blade, she caused its silver to shift into a form more suited to its new bearer; it transformed from a greatsword to a halberd, with insignias and engravings representing its new bearer.

You gain a +1 bonus to attack and damage rolls made with this silver and magic weapon. Any creature with damage resistance that is specifically overcome by a silver weapon, or otherwise has a weakness to silver weapons, suffers an additional 1d6 slashing damage from attacks made with this weapon.

Secret: If the wielder learns Sorilka’s true name (which Sorilka grants as a reward for achieving great deeds in the Silver Knight’s name), the wielder may make another attack with it after reducing a creature to 0 hit points with it, up to once per round.

The name Ebb Tide comes from a storyline in Shattered Isles, a LARP I’ve mentioned several times in this series. Trying to make a net a worthwhile weapon is hard mode, y’all. I gave this thing a pile of features, and I’m still not sure it’s worth using. I tried to address the net’s weaknesses without just rewriting the net itself, and also grant some useful or interesting powers on the side.

Glutton’s Cleaver is mightily straightforward. I don’t remember where I first saw the “execute” feature that shows up in this weapon’s Secret, but I think it fits here – eliminating the weak or severely wounded outright.

Midsummer and Midwinter were challenging to stat, since they need to fit together without being such perfect counters to one another that the fight is a guaranteed stalemate (much like the Queens themselves). That their powers are always-on is what pushes them into legendary rarity, to my mind.

Grisigon’s Thunder and Sorilka’s Cleaving Blade probably don’t need a lot of explanation, except to say that the fey are directly opposed to the gods in my setting, and thus to clerics and most paladins also. (They make an exception for Oath of the Ancients paladins, because they’re not stupid enough to turn up their noses at that much badassery.)

I hope you’ve enjoyed these items as much as I’ve enjoyed writing them! Next week will probably be an Unearthed Arcana week, and its topic might make a huge difference in what I write about in the week following.

Get to Know the Merfolk