The Delightful Oddity of Al-Qadim 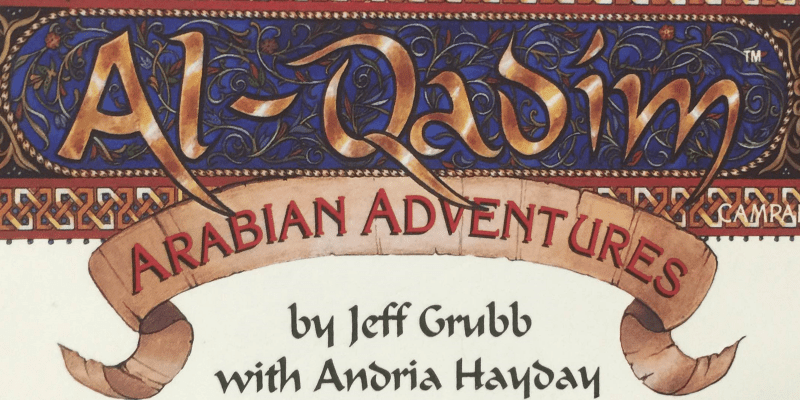 Not so long ago, I wrote about one of my favorite 2nd editions settings, Planescape. Besides the wacky hijinks of the planes, it was the song of the sands that captured my interests. Not Dark Sun, that fantastical post-apocalyptic adventure wasteland, but Al-Qadim, the Land of Fate. Technically a sub-setting of Forgotten Realms, Al-Qadim has precious little in common with the core setting. In fact, most of the link is through the primordials, which are central to the setting’s past, but less so to the present day setting. While it is easy to dismiss the setting as a riff on One Thousand and One Nights and voyages of Sinbad, it proves to be so much richer than a simple reskinned setting dump.

Cards on the table: I have not read every single supplement published in the Al-Qadim setting. I know, it makes me a filthy casual. However, my casual tears have managed roughly two-thirds of the setting books in good condition in the intervening twenty years. Considering I was barely into my teens when I started collecting, I think that’s a great indicator of how much I like the setting. If something survives you moving with it more than three times, it’s basically a part of your soul. I’ve shed a LOT of gaming books over the years, but these have always made the cut.

The thing that initially caught my attention when I was young was just how incredibly different the setting appeared. By the time I had started playing tabletop games, I had read the works of Tolkien numerous time. Elves opposing orcs? Of course they do! Elves have magicall music? Of course they do! Praise the sun Eru Ilúvatar. My little mind was blown when I first read the setting material for Al-Qadim. There is no racial tension in Zakhara, the Land of Fate? Orcs and dwarves live side by side, speaking the same tongue and intermarrying like it ain’t no thang? Whaaaaaaaat?

In fact, the main conflicts in the setting are ones of moralism: enlightenment vs. savagery, discipline vs. decadence, peace vs. violence, and honor vs. dishonor. While these are presented as fairly equal conflicts, Arabian Adventures goes to great lengths to set the record straight as to what these all mean in context. Status and honor guide life in Zakhara, so much so that calculating your status numerically matters greatly within the game. In the time-honored tradition of One Thousand and One Nights, there are stories of beggars pretending to be caliphs and caliphs pretending to be beggars. In these tales, the true status of the pretender becomes clear, no matter what deception is perpetrated. Status is a driving force in an Al-Qadim game, rising natively as players level, but affected by their interactions with others, and fickle fate.

The kits available for play are completely separate from the existing Forgotten Realms structure. In fact, if you come from outside Zakhara, the only kits you can select from the four available class archetypes are the outsider kits. This is to reinforce how very, very different and segregated from the rest of the Realms the Land of Fate is meant to be. Otherwise, you select kits from the Fighter, Rogue, Priest, and Wizard archetypes to apply to your character. My favorite thing about the archetypes is how much thematic information is packed into each of them. Desert riders, mamluks, rawun, beggar-thieves, barbers, holy slayers, sorcerers, elementalists, ethoists, kahin, and sha’ir: each of them incredibly evocative and thematic.

Outsiders are treated as oddities, and must work to assimilate into Zakharan society. The typical modalities of the rest of the Realm are sure to lead to their own frustration and ostracization. Having a noble title, land, and power mean nothing if the rest of the pillars of Zakhara are ignored. Further, the lack of Zakharan kits means outsiders are unable to tap into the powers the place has to offer, which is a big part of exploration game play.

The enlightened people of Zakhara, those in the lands ruled by the Grand Caliph, have five guiding factors in their life. Those pillars are honor, family, purity, hospitality, and piety. What’s cool about the setting is that antagonists find these as guiding factors in their own lives. In fact, one of the larger parts of the pillar of hospitality is the Bond of Salt. The Bond of Salt exists to communicate the theme of hospitality, but it’s also an incredibly useful tool in the storyteller’s arsenal.

The Bond of Salt is an ancient tradition to link guest and host. When a guest accepts salt from a host, the host is guaranteeing the safety of the guest for three days, the believed time that the salt remains in the system. The guest, for their part, agrees to not harm the host or the host’s family for the duration as well. To do so would do incredible damage to one’s honor and station. The cynical minded might say, “What does a villain care about this, anyway? They are all dishonorable louts!” Well, One Thousand and One Nights has something to say about that! Even the thieves in the story of Ali Baba and the Forty Thieves will not accept salt from Ali Baba when attempting to hunt him down to get their treasure back. The thieves have to worry about what their cohorts think of them, and what the others in their line of work think of them. It’s not as simple as good and bad.

This isn’t the only pillar that allows for excellent hooks into adventure. Both family and honor provide easy ins. The concept of family is an extended one in Al-Qadim. Society highly values large families, and loyalty to the family precedes everything else. Blood is worth more than any sort of material wealth, and a Zakharan would never think to abandon family. Of course, when your family is so huge, there is undoubtedly a bad seed, a screw-up, or an unnecessary risk-taker. It’s pretty easy to imagine needing to bail out family, take on their debt, or finish a job left unfinished, no matter how unsavory it might be. Sure, it might even lose you station, but it would be worse to consider the fallout of not supporting your family.

Faith is a huge part of life in the Land of Fate. The gods of enlightenment are not like the gods of the rest of the Realms. They don’t really have portfolios to speak of, and they instead embody ideals, like wisdom, strength, or beauty: the ideals of an enlightened civilization. That isn’t to say the gods don’t answer the prayers of the faithful. Clerics are widespread, numerous, and powerful. The clerics are incredibly divided on the message of the gods and how to communicate it. The clerics are roughly divided into wandering priests spreading the message to commoners (pragmatists), those who tend to the temples and proselytize to the faithful (ethoists), and those who want to go on crusades and put people to the sword (moralists). Of course, there are also wise women of the desert with the power to always uncover deceit and seek the truth (hakima), and the super weird and neat idol priests (kahin) that worship places or objects of power. Kahin are not strictly druids, but they are totally druids.

Beyond the faith, there is also the concept of fate and the evil eye. The evil eye is a very real magical curse laid upon a target for myriad reasons, and brings foul luck to the target until it is removed. There are charms and spells against it, of course, and people do everything they can to avoid being the target of the evil eye. There are also those who seek out the attention of the evil eye, so they can brag about how badass they are for surviving it. It’s a big thing in the setting.

Fate is another matter entirely. No one knows what Fate is, though it is agreed that it is a her, and that she exists. She appeared as a shadowy woman long ago, and whispers secrets to gods, genies, and man. When she departed, she left her knowledge in the hands of a woman who became known as the Loregiver. The scrolls of the Loregiver were discovered in the past of Zakhara, and they became the basis of the pillars of enlightenment. So, everyone believes in Fate, the land takes its name from her, and people can call out to Fate and sometimes receive a response. Though you had better be desperate to do so.

One of the defining and interesting parts of the setting is the prevalence of genies. They are all over the place, seeking influence, meddling, tricking people, causing problems, trying to be worshipped, you name it. If you are in Zakhara, you are going to have to deal with genies. It’s just a matter of course. Some of the genies might be benevolent, but they all have their own motives. There are lesser kin that are can be controlled or summoned through magic, and the truly powerful might command and compel even the more powerful genies.

In fact, there is an entire, crazy weird, class built around it, the Sha’ir! I could spend a ton of time talking about the Sha’ir, but I will refrain.

Anyway, I love genies. One of the rarer threats in other settings, their machinations are weird and alien. The cities of the genies, like the City of Brass, are places of magical wonder, bizarre rules and codes, and naked intrigue. This gets particularly interesting when you start factoring stuff like Archfey, Devils, Demons, and so on. There is a whole magical underbelly that is simply a way of life in Zakhara. Intrigue upon intrigue that isn’t a part of most campaigns. It’s squalid in a completely high magic way, which you just don’t see all that often. It’s incredible.

If you are looking for a land of high adventure that is outside what you might normally consider, think about looking into Al-Qadim. I absolutely adore the setting, and it’s a great glimpse into the wider world of what D&D was doing at the time. There is so much wonderful weirdness and experimentation going on in this setting that shows up twenty years later in indie work. It’s pretty awesome stuff; going through and looking at what was left behind during the evolution of the genre is interesting to discover. There are gems all over the place, especially with this one. Give it a shot, you won’t be disappointed.