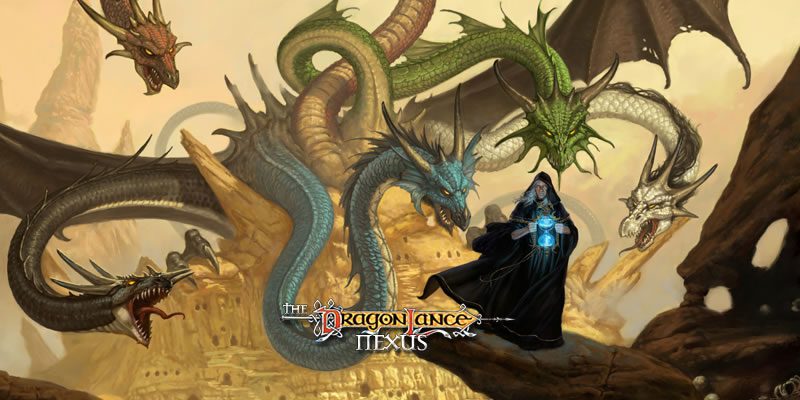 Shawn: Dragonlance was the setting that really pulled me into D&D way back in the 80s, so I love all things Krynn. This week I’m taking a break from my Campaign Trail column to bring you a guest post from Trampas “Dragonhelm” Whiteman, looking at the history of the ENnie award winning Dragonlance Nexus and Dragonlance fandom. Take it away Trampas…

Sometimes, a story has an epic beginning. Sometimes, it’s fate. And sometimes…just sometimes…it’s sheer dumb luck, being at the right place at the right time, and having a whole lot of gumption. It was the latter that spawned the Dragonlance Nexus.

In the fall of 2000, the Dragonlance fan community was a very different place. We didn’t have Facebook back then, and message boards were just starting to become a thing. I had joined the now-defunct Dragonlance-L mailing list to discuss my favorite D&D setting – Dragonlance. Little did I know what I was getting myself into.

Dragonlance was divided, but it wasn’t just one division. There were several. There were those pushing for 3rd edition conversions for Dragonlance, while some preferred the SAGA rules set of the Fifth Age line of products, and others still clamored for the return to AD&D. There was also a division between Ansalon and Taladas fans. Effectively, Dragonlance was two settings in one.

During this time, the Dragonlance-L mailing list kept having calls of people saying, “We should do something!” And yet, nobody did. I found this strange. In my naiveté, I thought maybe I could get some people to start talking, then hand off the project to folks who had been in the community longer than me. That’s when I learned that if you come up with an idea, you have to be prepared to run with it.

From this, the Whitestone Council was born. This was a group of super-fans who would work to convert Dragonlance to D&D 3rd edition and keep Dragonlance gaming alive. At this time, I met my good friend Matt “Paladin” Haag, who ran the Dragonlance.com fan site. Matt and I would form a partnership and friendship that lasts to this day.

At that same time, another player entered the field – none other than Dragonlance creator Tracy Hickman! Tracy had this wild idea of having the fan sites work together in sort of a network, each controlled by their own creator, but sharing the same look to give the sites an almost seamless quality. He called the idea the Dragonlance Nexus.

In January 2001, Jim Butler, then of Wizards of the Coast, announced that each setting would have an official fan website. Tracy, Matt, and I talked and we decided that we would be stronger if we worked together.

The Dragonlance Nexus was born, and the Whitestone Council began work on a fan project we called Dragonlance Adventures 3rd Edition, or DLA3e for short.

A year later, I got an e-mail from none other than Margaret Weis herself asking if we could talk on the phone. I anxiously said yes, knowing in my heart the news before she told me. Margaret’s company, Sovereign Press, got the license to produce Dragonlance gaming products for D&D 3.5! Then she dropped a bombshell on me – she wanted the Whitestone Council to be a part of it!

Matt and I got to meet with her, Don Perrin, Jamie Chambers, and Chris Coyle at her house, an old converted barn. I got to see several original paintings she had, which I had only seen previously on the cover of books. Let me tell you, Larry Elmore’s paintings are even more breathtaking in person!

Throughout the next several years, we worked on several of the Dragonlance d20 books, both in terms of writing and continuity. Each book seemed to progressively get better, and I think that you can feel the love that went into those books. I was proud that our work and efforts in the DLA3e project were incorporated into the Dragonlance Campaign Setting sourcebook.

The War of Souls trilogy did much to bring fandom together, even as the Nexus worked on the philosophy that all points of view on Dragonlance were valid. We showed a lot of respect to all eras, game systems, and locales within Dragonlance.

This was an era that I refer to as the “golden age of Dragonlance gaming.” It was an era that launched the gaming careers of RPG designer Cam Banks and cartographer Sean Macdonald.

All good things must come to an end, and that included the Dragonlance license. D&D 4th edition was on the horizon, and Wizards of the Coast had ended all their licenses with 3rd parties. Sovereign Press, now known as Margaret Weis Productions, was but one of those casualties.

Shortly after, Wizards of the Coast discontinued the Dragonlance novel line. It was the final nail in the coffin, and we started to see people lose interest in the setting. It’s difficult to keep a fan community going when you have no new products.

During this time, we also saw a split in the D&D fan community between 4th edition and Pathfinder. This split certainly spilled over into Dragonlance.

While we could have easily thrown in the towel at that time, we didn’t. The Dragonlance Nexus is, in a way, the steward of the Dragonlance setting. We keep it going and are in a position if the line was ever to be revived.

With the launch of D&D 5th edition, we saw change yet again. While we still do not have new products, Wizards of the Coast has been releasing old products on DMs Guild, powered by DriveThruRPG.

The fan community is once again working on conversions, both to 5th edition and to Pathfinder.

We are also working on building a brand-new Nexus, one that is more up-to-date and ready to expand to the future. Currently, we are running both the classic Nexus and the new Nexus as we work on porting everything over. Considering the hundreds, if not thousands, of articles, fan art, products, etc. that we have on the site (some of which came over from Dragonlance.com), it’s a long and daunting road.

Fifteen years later, and the site that we were told wouldn’t last is still standing strong. We have had to adapt to survive, but we roll with the changes. Much is different now, and yet many things still are the same.

Dragonlance lives. It breathes, and its heart beats within the souls of Dragonlance fandom. When wanderlust comes calling and you find yourself on the path to adventure in the world of Krynn, I hope you will stop by.

Step into the Nexus. The portal to adventure awaits!

Looking for more Dragonlance? Check out our Dragonlance guides to the campaign setting and player options.