The Problem of Ogre Power 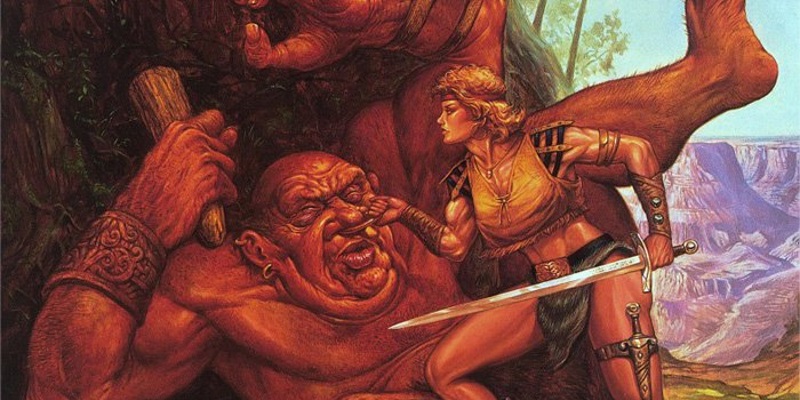 Dating back to… I think it was the release of D&D Basic, I’ve been rankled by the design around ability-score-boosting items in D&D 5e. I got to thinking about ability-score-boosting magic items. I’ll explain why, and I’ll offer alternatives – but even if you don’t agree with my reasoning, these six items might still have a place in your campaign. Items first, design conversation afterward.

This red cloak marks you as a commanding presence. While you wear the cloak, your Charisma increases by 2, to a maximum of 17. If your Charisma is 16 or higher without the cloak, when you take damage from an enemy, you may spend your reaction to call for decisive revenge against that enemy. All of your allies within 15 feet deal an additional 1d6 damage to that enemy the next time they deal damage to it before the end of their next turn. Once you activate this power, you may not do so again until you complete a long rest.

Crown of the Third Eye

This silver circlet is set with a clear quartz stone. While you wear the crown, your Wisdom increases by 2, to a maximum of 17. If your Wisdom is 16 or higher without the crown, you may cast see invisible without expending a spell slot. Once you activate this power, you may not do so again until you complete a long rest.

This mithral skullcap is marked with esoteric runes. While you wear the skullcap, your Intelligence increases by 2, to a maximum of 17. If your Intelligence is 16 or higher without the skullcap, when you succeed an Intelligence ability check as part of analyzing a problem, you may ask the DM, “Which of my allies, including myself, is best-suited to confront this problem?” The DM’s answer will be truthful based on a best guess. If the named character is the first to take action against the problem, add your Intelligence bonus to the first ability check, saving throw, or attack roll the character makes. Once activate this power, you may not do so again until you complete a short or long rest.

These gauntlets appear to be made of granite, though they do not restrict your movement any more than normal gauntlets. While you wear them, your Strength increases by 2, to a maximum of 17. If your Strength is 16 or higher without the gauntlets, ability checks that creatures make to escape your grapple suffer disadvantage.

Further, if your Strength is 16 or higher without the gauntlets, you can use your action to throw a creature that is grappled by you. To do so, make another grapple check, which must beat your opponent’s grapple check by 5. If you succeed, you throw your opponent 15 feet. You may throw them at another creature within 15 feet by making a second roll, treating the creature you are grappling as a thrown weapon. On a success, both the thrown creature and the target creature take 1d4 + your Strength bonus damage and become prone. If the target creature is Large or larger, it does not become prone.

These supple gray leather gloves grant lightning speed to the wearer’s motions. While you wear the gloves, your Dexterity increases by 2, to a maximum of 17. If your Dexterity is 16 or higher without the gloves, your unarmed attacks deal an additional 1d4 lightning damage, and you may spend a bonus action to make two attacks with an offhand weapon. Once you activate the latter power, you may not do so again until you complete a short or long rest.

Talisman of the Endless Well

In the dawn of gaming history, there were gauntlets of ogre power and gauntlets of dexterity. Okay, I don’t actually know when those entered D&D; this isn’t a deep dive into their history. I’m just going back to 1e here, in which the former grant 18/00 Strength, regardless of your previous Strength score. If you don’t know what that “/00” business is about, you’re lucky, because it was stupid and made no sense; just understand that it means the same thing in context as 20 Strength means in D&D. It’s the absolute peak of human attainment. If you’re already there – a statistically improbable state nevertheless enjoyed by some fighter-types – you get nothing.

Gauntlets of dexterity grant lots of Dexterity to characters with very low Dex, and only a little to characters with very high Dex, though given the bell-curve-based scaling of Dex values, this is a pretty sane response and it makes them about equally desirable for all characters. If you are so unfortunate as to have a Dex of 3, these gauntlets erase your penalties to initiative, saving throws, and AC completely. If you’re lucky enough to have a Dex of 14 or better, you’re only improving by 1 point, but every point of Dex is another point of bonus to AC and saving throws.

In 2e, these two items change very little: gauntlets of dexterity now grant Pick Pockets and Open Locks abilities, or boost them if you already have them. The wording for gauntlets of ogre power is almost perfectly unchanged, and the mechanics are the same.

3.0 changes everything. Now the gauntlets of ogre power grant +2 Strength, but you’ve got to switch to a belt of giant strength for the non-stacking +4 or +6 Strength boosts. The good part of this is that any character would benefit from these, unless you have an enhancement bonus to Strength from some other item (this is not terribly common). Also, the game accepts up-front that characters greatly surpass what are politely called “mortal limits;” a 20th level rogue with a Dex below 20 is something of an oddity. Gloves of dexterity now come in +2, +4, or +6 models. Oh, and there are stat-boosting items for Constitution (amulet of health), Intelligence (headband of intellect), Wisdom (periapt of wisdom), and Charisma (cloak of charisma). These instantly become some of the most desired magic items in the game, on a class-by-class basis. Figure out your attack stat or spellcasting stat: now you want that one and an amulet of health. If you have something else in that item slot, you’re basically playing wrong and the game’s math is going to make sure you know that.

4e is not shy about killing that structure. Magic items do not boost ability scores, full stop.

That brings us to 5e, where we have the same list of ability-score-boosting items as 3.x, but an implementation much more like the 1e and 2e gauntlets of ogre power. (The periapt of wisdom and cloak of charisma are MIA, for whatever reason.) Unless your ability score was already 19 or greater in the relevant stat, it becomes 19 as soon as you attune and don the item. The belt of giant strength is the exception, as it instead changes your Strength score to 21, 23, 25, 27, or 29, depending on the variety of the belt. Note that all of these items require attunement. There are also ioun stones that grant a simple +2 to a stat, to a maximum of 20, but these don’t especially interest me for this article’s purposes because I’m okay with ioun stones being weird outliers.

Why Would This Be a Problem?

Bounded accuracy is at the core of 5e design, so if an ability score is going over 20 for any reason, it needs to be really, really good. More like “I just bought my twentieth and final level of barbarian” than “I got a rare magic item.” If all of these items granted a flat +2 and broke the cap of 20, we’d likely be back in the 3.x-era best-in-slot situation, but here there are only three slots, because attunement.

It drives me nuts, though, that gauntlets of ogre power are likely useless to the party’s fighter. I can’t seem to let go of the feeling that this is betraying the fiction. Who should want magic items to increase strength? The game’s fundamental story and logic say “fighters, barbarians, paladins, those kinds of classes.” But for a lot of them, this item does nothing, so it instead goes to someone who doesn’t use Strength as a main stat.

If the party has a rogue with 14 Strength and a wizard with 8 Strength (imagining for a moment that you’re in the sort of group that assigns magic items by greatest benefit to the team), who should wear the gauntlets of ogre power? Well, would you rather see a net gain of 5 points of Strength, or 11? These completely overwrite a flaw that you chose at character creation.

What I’m saying is that both the flat add with no cap (3.x model) and the assigned value (5e model) have problems, and I think we can do better than either without getting ridiculously complicated in design. The one thing that the 3.x and 5e models both have going for them is that they are extremely simple to communicate to the DM, and for the DM to communicate to the players. 5e’s design often chooses simplicity over intricacy, and it gains a lot of ease of use from that.

What I’ve done with these magic items has no obvious precursor in 5e magic item design, to my knowledge. What I’m going for here is making items that are roughly-equally useful, but in different ways. The 16/17 split is the easiest way I could find to make it all work – it seemed better than characters with a stat of 15 getting one point of boost and no secondary feature, or migrating the 16/17 breakpoint down to a 14/15 breakpoint. I specifically chose 16/17 because I tend to see those as the lowest scores that still signify “this might be my best ability score.” If you already have a very good score in that stat, you don’t need bigger numbers, you need an enhanced application.

One more thing on complexity. I’ve been part of a lot of rules design conversations over the years. “I worry that this is too complicated for players to use” is, without question, the single most universally applicable dismissal of an idea. I’ve seen this used when it’s fundamentally correct, but also when the person saying it didn’t like the idea but couldn’t think of a more incisive critique. Simplicity is good, and Lord knows I’ve done some overly complicated things in my life. Just… understand that it is the conversational equivalent of a flat dismissal. There’s no cogent argument to be made against it, beyond “I disagree, and think this complexity is worth the cost of its inclusion.”

Get to Know the Azer