Get to Know the Scarecrow 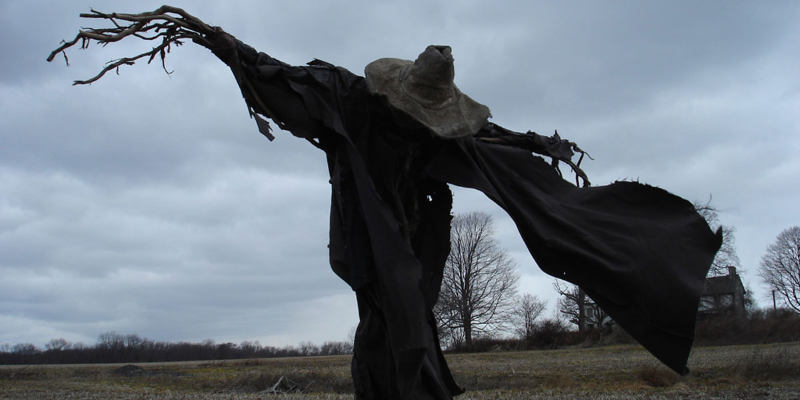 Welcome to Fall. The time of year where we lament that it is still too warm for this time of year and yearn for cold weather, only to complain when the weather is actually cold. The time of year where bonfires, raking the yard, and drinking to excess in the name of team loyalty rule the day. It’s also the time of monsters, honoring the dead, giving thanks, pilgrimages, and the harvest. While Halloween gets most of the focus, with growing interest in Day of the Dead and All Saints’ Day, I’ve always felt a strong pull to the mythos surrounding the harvest. There is just something about the lore and superstitions associated with the harvest that stirs my creative juices. So let’s kick off the season with a look at a seasonal staple, the scarecrow. If you’ve missed the previous creatures I’ve covered, you can find them below. 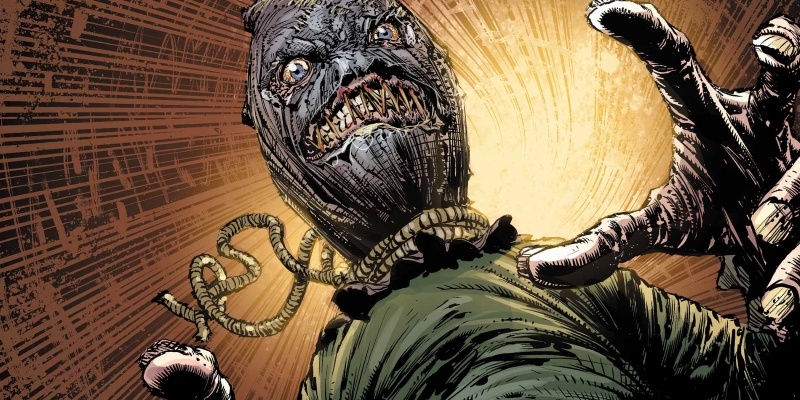 The scarecrow is interesting in part thanks to how the world perceives it. About half of the festivals involving the scarecrow take place in Spring, while the other half take place in Autumn. No matter which one you take a deep dive into, you’ll find that it is inextricably linked to the harvest. The concept of the scarecrow transcends geopolitical boundaries, popping up just about everywhere agrarian culture took hold. Traditionally, the scarecrow is a decoy shaped and dressed like a human, and planted in a field to keep away the birds that would eat the crops and seeds. I say traditionally, because the modern methods for keeping away birds do not rely on a typical faux-human, but employ things like inflatable balloon people, and reflective ribbons to make the field appear awash in heat.

We have to look back some 1300+ years to the Japanese tome Kojiki (Record of Ancient Matters) in order to find the first recorded account of a sentient scarecrow. There we find mention of Kuebiko (from the phrase meaning “crumbling/disabled prince,” but literally meaning “long stretch help old”), the immobile god of knowledge and agriculture. When people want to know something, they came to Kuebiko, who was said to know everything that occurred within the Empire. His omnipotence stemmed from standing outside all day. Kuebiko has remained an important mythological figure to Japan, and is still venerated to this day. He even pops up in a few games you might recognize, such as The Legend of Zelda: Ocarina of Time.

This is a far cry from the ambulant scarecrows we see in Dungeons & Dragons. For that, we look back to Nathaniel Hawthorne, that paragon of joyful, upbeat American literature. In 1852, he released a short story entitled Feathertop, as part of the Mosses from an Old Manse collection. The story focuses on Mother Rigby, a witch who animates a scarecrow, and sends him to woo Polly Gookin, the daughter of a woman Mother Rigby has had dealings with in the past. Mother Rigby gives the scarecrow, Feathertop, a pipe, which binds him to life and provides him a human appearance. Feathertop and Polly fall in love and are happy, until they gaze into a bewitched mirror, revealing that Feathertop is just a scarecrow. Polly faints, and Feathertop runs home, bemoaning his fate and throwing away his pipe to once again become a pile of hay and scraps. The story ends with Mother Rigby ruminating on the fact that so many fake people go through life just fine, as long as they do not know who they really are. Now that he has become enlightened, he’s no longer happy, knowing what he is. It’s worth noting that the roots of this story changed and molded to become Frosty the Snowman. 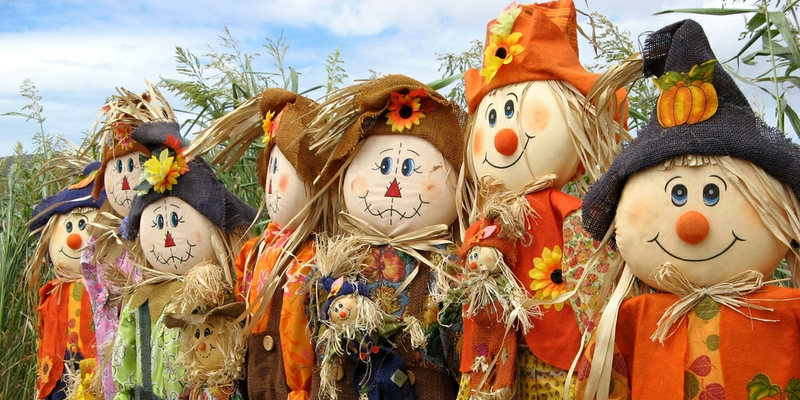 The caring and lovable scarecrow persists for quite a while. In 1900, we see it return in The Wonderful Wizard of Oz. Oddly enough, this is something of a mix between Feathertop and Kuebiko. The scarecrow is freshly made and ignorant of many things, seeking brains from the wizard to make him intelligent. As he travels through Oz, it is apparent that not only is he intelligent, he is also humble and wise. In fact, he is called the “wisest man in all of Oz.” He’s even made ruler of Oz at the end. Of course, being the wise and intelligent creature he is, he passes rulership to Princess Ozma. Ain’t nobody got time for that. This is also the last time you really see the wise guidance aspect of the scarecrow.

In 1915, the Doctor Syn books by Russell Thorndike began publication. While these books do not feature supernatural elements, it does feature a character who calls himself the Scarecrow. The Scarecrow is none other than the aforementioned Doctor Syn, disguised in the clothes of a Scarecrow to hide his identity as a captain of smugglers, and to strike fear into the hearts of his enemies. He made the costume quite elaborate, including the use of pumpkins and luminescent paint. He rode a black stallion named Gehenna, and often employed trickery to further develop his legend. A local woman, believed to be a witch, aided him in his pursuits, and spread rumors that he was an actual scarecrow, possessed by the devil. As you can see, this has roots in the Hawthorne tale, but has a twist that becomes common as the years go on. The wisdom and benevolence of Kuebiko is a little evident here, but it’s more of a Robin Hood variant.

From there, we go to the world of comics, where the character Scarecrow contends against Batman starting in 1941. He is really a psychiatrist by the name of Jonathan Crane, who is entirely obsessed with fear. He dresses as a scarecrow, presumably because scare is in the name, and uses fear gas to induce hallucinations, and to terrify, weaken, and manipulate those under its sway. He performs these actions to varying degrees of success, but it’s enough to have a solid-ish fan base, and gain credentials as being part of Batman’s rogues gallery. It’s worth noting that various incarnations of Scarecrow have cloaks made of bats. 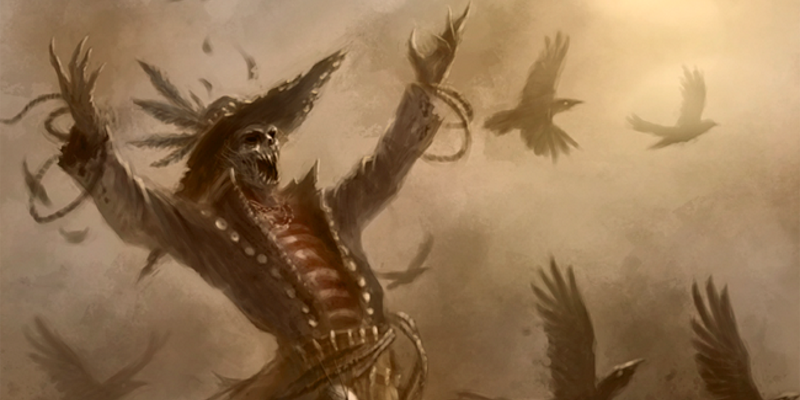 A decade later, Marvel introduced their own version of Scarecrow, no relation. This guy is a circus performer, obsessed with Deadpool in more recent years. He doesn’t have any superpowers to start with, but gains super strength, speed, and the ability to recover from wounds. Oh yeah, he also controls fear and crows. This is pretty darn close to every scarecrow you see depicted in modern fiction, though fantasy ones tend to be less about armor and loot (Fiddlesticks, amirite?).

This brings us to the D&D scarecrow. This dude first makes an appearance in 1981’s Fiend Folio. In 1990, a second type of scarecrow was added: the conscious scarecrow. Both are discussed in Greyhawk’s Monstrous Compendium Greyhawk Appendix in 1991, and in 1993’s Monstrous Manual. The scarecrow was also printed in 1991’s Ravenloft Campaign Setting, and reprinted in 1996 as part of Ravenloft’s Monstrous Compendium vol. 1 and 2. In a weird twist, the scarecrow didn’t appear in any 3e or 3.5e books. Instead, they got a measly two articles about them. The first in Dungeon #84, and again in Dragon #355. 4e isn’t much better, printing them in the third Monster Manual. Yech.

Lucky for us, 5e has them in the first release. This is huge. Scarecrows are low-challenge constructs (CR 1), and get some awesome lore around them. For this lore, we once again go back to Nathaniel Hawthorne. You see, scarecrows are created only by binding the spirit of a slain evil creature to it, which grants it mobility and motive. Hags and witches are the most common creators of scarecrows, but anyone skilled in the wizardly arts, and possibly the priestly arts, could be responsible. Typically, hags and witches opt for the spirits of demons, but this is preference rather than requirement. It’s probably just easiest to set up everything else in a room, summon a lesser demon, and then shove it into your scarecrow. In a twist that is both good and bad, the personalities of those who are used as scarecrow fuel are subdued. They might show flashes of who the underlying spirit is, but they do not have their memories or their goals. Of course, that’s easy enough to change for a story, if you care to do so. 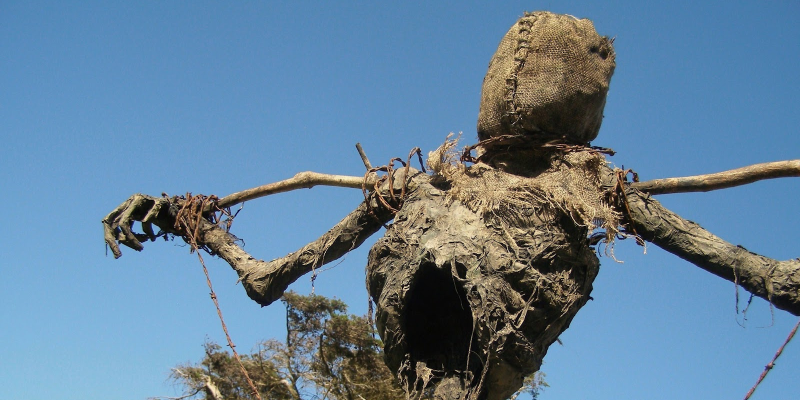 As you can see, everything stems from those first two scarecrow stories, with further changes being much more recent, comparatively speaking. While Hawthorne’s story isn’t one of horror, but rather an allegory people lacking substance, the core precept of the tale has endured. A witch creates a golem, gives it a soul, ties it to a magical item, and then uses it for her own purposes. This is about as D&D as it gets, quite frankly. When you couple this with either the great wisdom of Kuebiko, or the violence and insanity of the Scarecrow(s) from the comics, it is once again just about as D&D as it gets.

Luckily, they are pretty great creatures. As written, they are great fodder and minions for a campaign-level villain. Given their story, it can easily extend into the high levels without much tweaking. The binding of a demon goes wrong, or the demon is too powerful, and blam, all of a sudden you are dealing with planar play. You can even do a redemption or rescue tale by slightly altering the idea that scarecrows have no personality and don’t remember much from their lives. If you are running a game for Halloween, or just getting into the themes of Fall for your game, give the scarecrow another look. Their pre-built theme is a ready-made hook that does the heavy lifting for you. Anything that helps you convey narrative so easily is a win in my book. It also doesn’t hurt that they are so rad.

The Salt in Wounds Setting for 5th ...