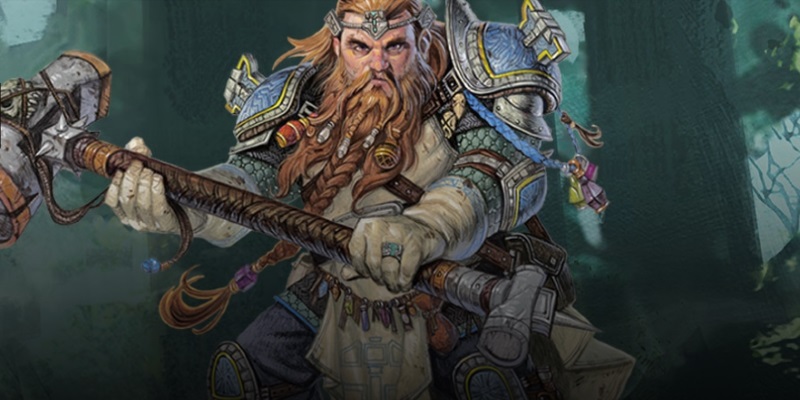 One of these days, I’ll start managing two-article weeks again, and my columns will return to their normal schedule. This is the week of America’s favorite secular food holiday, and I’ll be mostly or entirely offline Wednesday evening through Saturday morning, so this week is not the one. Today, though, Rogers and Hammerstein have Unearthed new Arcana for us: three new domains for clerics. Where barbarians and bards were two of the classes narrowest in options, the cleric stands tied with the wizard for the most in the initial release (if you count Death from the DMG), and they stay even in the Sword Coast Adventurer’s Guide as they each tack on one more. Let’s see what the Forge, Grave, and Protection domains offer.

The forge and crafts have been calling out for a domain for thematically connected gods all along. Gods like Moradin are a poor fit for the Knowledge domain that the Player’s Handbook assigns them – Knowledge is unmistakably squishy and caster-y. This should also appeal to angry fire gods of all kinds – Kossuth and Surtur come to mind. How does the Forge domain stack up?

Overall, the Forge domain is my favorite of the three, and I have plenty of criticism to offer it. Like I said above, it’s an important concept to support, and this isn’t bad overall. (Except for the fire immunity – that one is always a bad idea.) I would be much happier to see something like the Channel Divinity option change to “reduce all fire damage until the beginning of your next turn to 0,” and the rest of Saint of Forge and Fire turned into something that isn’t just a lift of Avatar of Battle.

The Grave domain is another theme that needed support, because the Death domain has the wrong tone for clerics of Kelemvor and other good or neutral gods of death. This has become a popular archetype, and it’s great to see something for those players.

Overall, the Grave domain doesn’t feel convincingly death-priest-y to me, until you pick up Keeper of Souls at 17th level. The domain’s playstyle is a Life cleric who would rather let you fall than heal you first. I would like to see a lot more thematic clarity in this domain’s features, if and when there’s a revision posted or published. The mechanics are laser-focused on combat applications here, and I’d like to see some of the other pillars of gameplay touched on. (Eyes of the Grave doesn’t get the job done, for reasons I’ve explained.)

This domain is the place to be if you love the paladin concept, but really wish it got 9th-level spells rather than stopping at 5th. I don’t know how else to explain it. There are a lot of possible points on the spectrum between cleric and paladin, and this is one expression of the midpoint.

The Protection domain, then, does what it says on the tin mechanically. Here at least, it seems entirely appropriate to go extra-heavy on combat-oriented features. I feel like they stayed a lot more conservative on feature design in this domain, and the rest of the document, than in the rest of this month’s UA articles so far. Keeper of Souls is crazy, sure. But nothing else is as flashy as some of the crazy things that the new barbarian and bard subclasses are doing. I’m glad that they’re supporting these portfolio concepts, but I’m underwhelmed with this implementation. (Of course, the best and worst implementations make me equally grateful for Unearthed Arcana’s existence as a column.)

My Steampunk Heist One-Shot on the GM ...