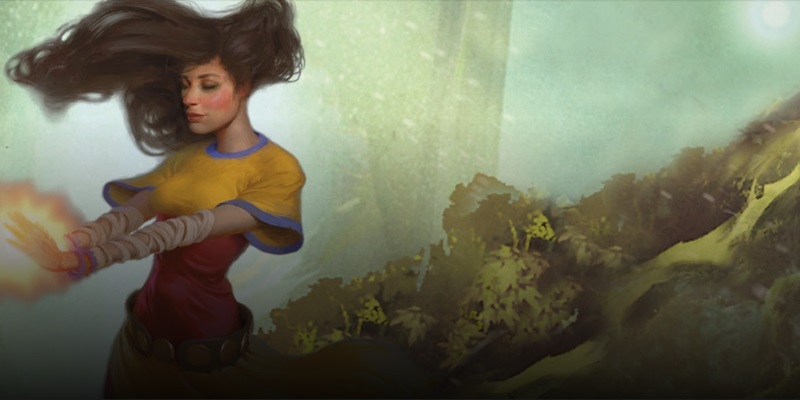 This week’s Unearthed Arcana is another of the less-represented classes, in terms of quantity of archetypes: the monk. Admittedly, the Way of the Four Elements monk has a lot of internal customization, so it could be a ton of different things. The new Monastic Traditions are the Way of the Kensei and the Way of Tranquility, which are about as opposite in concept as they could be. As part of this, I want to talk about the challenges of playing a pacifistic character in a D&D-based tabletop game, and how to do that without gatekeeping everyone else’s fun.

Way of the Kensei

Thematically, the Kensei is the monk’s answer to the Battle Master – a warrior-artist, but in this case without spending any features on the “artist” side. To be fair, though, monastic traditions pretty consistently steer clear of ribbon features. I’m not sure why that is. Let’s get to it.

Without seeing this in action at the table over the course of many levels, it’s hard to be sure of how often its more situational features will come up. The archetype looks substantially underpowered to me; its primary effect before 11th level is making some feats that monks normally ignore more appealing (Great Weapon Master, for starters). What I get from the mechanics is “I express ki through a nontraditional weapon,” not “sword saint.” I’m not sure what would meet my idea of sword saint, though, since my only contact with the idea in fiction is the Nyeung Bao of the Black Company series. It’s vague as hell, but I’d like to see the mechanics express more nuance in theme. The decision-making and tradeoffs in Path of the Kensei, compared to Martial Arts, don’t feel great to me.

EDITED TO ADD: There’s a ton of conversation online about whether the Kensei’s ability to use other weapons is overpowered, and around parsing Path of the Kensei vs. Martial Arts. Let’s break this down at various level bands, with a few base assumptions: Alice is a monk with 20 Str, a greatsword, and a longbow; Bob is a monk with 20 Dex and a greatsword.

If Alice gets heavy armor proficiency from some other source, she can ditch Wisdom as a stat and just wear heavy armor. The AC comparison in the long haul comes down to how powerful of magic armor she acquires, but she can probably put a better score in Con as a result, so there’s some net gain here. Also Stealth disadvantage. Also, because she’s going for big weapon damage with the greatsword, she functionally loses Deflect Missiles.

At 3rd level, Bob’s attack routine matches Alice’s. Heavy armor holds no attraction for him, of course, since he doesn’t want to spend a good ability score on Strength just to avoid a speed hit from heavy armor.

At 5th level, Alice gets Extra Attack. This is where things start to get complicated. She can:

This is all basically the same for Bob, except that Bob invests in Wisdom as his secondary stat rather than Con, so his Stunning Strikes are good rather than… not. He sometimes has a better AC, but always has fewer hit points. He acts a lot sooner in combat than she does, but that really only matters in the opening round.

As they gain levels, their unarmed damage scales up, ending in Flurry of Blows rounds that are (4d6 + 2d12 + 20), and non-FoB rounds that have the decision tree I described above. Pummeling mostly stops being a good idea at 11th level, once two unarmed attacks are decisively better than one greatsword attack. The right to spend ki to improve the greatsword is solid, but compared to the damage increases that other classes get at or near that level, +3 attack and damage for two attacks per round (or three if you trigger Great Weapon Master) is far from game-breaking.

Things do get a lot weirder if haste is active, and I’m not going to break that down here. I’m also not covering shield-using kensei or multiclassed fighter/monks (though that’s one of the clearest ways to get to heavy armor proficiency).

Please let me know if you spot errors in my math or decision trees.

The Way of Tranquility monk – I guess we’ll call them Tranquil monks, to strip it down to a single-word adjective? – sets out to make a playable pacifist. Pacifism is a hard road in any kind of heroic adventure, all the more so if you’re sharing the spotlight with people who don’t have magical pacifism powers. I’m going to come back around to the point of how to play a pacifist constructively, so that everyone in the group has more fun, but first let’s just tackle this subclass.

NB: The flavor text calls out that they aren’t strict pacifists and will end you if all other reasonable efforts fail.

So… this is tough. These guys are, in a technical sense, probably overpowered. But to get the advantage of their overpowered-ness, they have to play the weak hand of never being the first to strike and delaying or averting combat. Only when someone else has really taken it on the chin do they break bad and end somebody. Right around the turn of the millennium, everyone figured out at roughly the same time that roleplaying restrictions were not a viable balance for superior punchy-fighty. In some ways, this subclass finds a loophole in that lesson, because its mechanics enforce the roleplaying restrictions.

On the other hand, it’s damn close to just being a rework of the Open Hand. I would probably make Tranquility and Open Hand the same Order, and every monk who rises through the ranks favors one set of lessons or the other.

I have great respect for committed, ethical pacifists in the real world, just so I’ve said that. It’s a tough row to hoe in a heroic-adventure gaming environment, though, and I want to discuss both the pitfalls and the ways I’ve seen it work well.

If you play a pacifist and establish your character goal as stop all fights before they start, and the rest of the party isn’t 110% on board with doing the same, you’re setting things up so that either you get what you want, or the rest of the group gets what they want. Get used to disappointment. This is the most-incorrect approach.

If you play a pacifist and talk it out with the rest of the team at the start of play, that’s a better approach. Even with prior discussion, though, it gets pretty tedious if your character takes every violent act as a personal failure, or reprimands the rest of the characters for engaging with the content.

The still better approach is to emphasize investigation, buffs, and healing during combat, supporting the team without personally engaging in violence. Investigation is particularly good because you may be advancing the party’s secondary goals, or spotting new secondary goals that would have otherwise gone unnoticed. This doesn’t mean “wander off and piss off more monsters” – that’s making things worse and making the rest of the party seriously question why they brought you along. Instead, you’re gathering details about the enemy or the terrain that you or an ally can exploit creatively in a future turn. You need a DM who either plans incredible detail, or is comfortable spinning up new details on the fly. The Search and Use an Object actions are your friend.

To reframe that: pursue alternate goals that you can resolve peacefully, rather than opposing the party’s core combat goals. Get other party members involved in your secondary goals, and make sure those goals contribute to the group’s overall success. This is a place where the DM definitely has to meet you halfway – if you can’t get that, pick a different character concept. To be really effective, you need to get one step ahead of the opposition, figuring out what they want and making it so that a fight is obviously less effective than some other approach.

Or just scale it back to refusal to kill, and Batman your way through the Forgotham Realms.

Get to Know Celestials