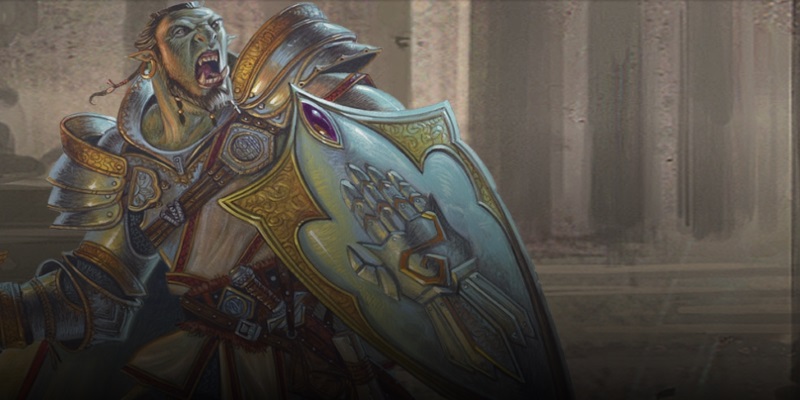 For this week’s Unearthed Arcana, I’d like to start us out with a quote.

Peace is a lie, there is only passion.
Through passion, I gain strength.
Through strength, I gain power.
Through power, I gain victory.
Through victory, my chains are broken.
The Force shall free me.

–the Code of the Sith

It’s gonna come up this week, because this week we get two new paladin oaths, and these are some very bad paladins indeed: Conquest and Treachery. (Here by “bad” I am talking about them as people, not their mechanical design.) These both need some kind of preface on how to play them without just being a super-douche to the rest of the party for the whole campaign.

You know, Arthurian fiction really needs black knights (it’s not a race thing) to challenge the Knights of the Round Table as they wander the countryside. This, though, presents them as the protagonists – possibly antihero protagonists, but all the same. I kinda want to play a revenant Oath of Conquest paladin, just to sew up the World of Warcraft death knight backstory. My own campaign setting recognizes some paladins as “Shadowguards,” usually sworn to the Dukes of Hell and enforcing their own merciless sense of justice. Up to this point, that has been one available interpretation of the Oath of Vengeance; the Oath of Conquest fits that bill very well also. Let’s see what it offers.

Thematically, this is a strong callback to 4e’s Vice of Domination blackguard, found in Heroes of Shadow, and to many of the anti-paladin class writeups over the years. Other than Implacable Spirit, I think these mechanics do a great job of communicating theme and creating an interesting gameplay dynamic. I am a little concerned about creatures with immunity to the frightened condition turning off a lot of the character’s powers, but they have a good breadth of options outside of frightened. I like what I see here and I would let a player try this out for a Shadowguard character concept.

Oh, right! I just remembered the Knights of Takhisis in Dragonlance. Assuming you’re comfortable using Devotion paladins for Knights of Solamnia, Conquest paladins are just about ideal for their counterparts. (Sure, there’s no help for the Knights of the Skull or Knights of the Thorn, but… you’re going to have to pick up some of your own multiclassing, homebrewing, or just respending class levels here.)

Much like the Oathbreaker found in the DMG, this is for paladins who have forsaken all oaths and pursue only their own self-interest. They are to the Abyss as Conquest paladins are to Hell: “Many of these paladins pay homage to demon lords, especially Grazz’t, Orcus, and Ayn Rand.” The text mentions that a few of them serve Hell, even so. (This is not the ideal way to prove the Satanic-panic folks wrong. Ahem.) The flavor text spells out – in case Treachery didn’t give it away! – that these are the worst possible teammates.

It feels to me like the Conquest and Treachery paladins are the clarification of the sort of muddled concept of what an anti-paladin is, going back across many editions. (For a review of those iterations, this article and the directory at the top of it should help.) Are they like paladins, but with armor taken from a heavy metal album cover and stronger, tougher, meaner? Or do they exemplify the furthest point from a paladin’s honesty, behaving more like assassins? Now there’s the Oath of Conquest for the former and the Oath of Treachery for the latter.

Let’s be real for a moment, though. The Oath of Treachery is crazy overpowered. Poison Strike is completely bonkers, even once-per-short-rest. Stacking it with a divine smite and a smite spell of some description… aie. At the same time, I honestly don’t care that it’s way too powerful. Paladins are all about the idea that the virtuous road is hard, while evil is a quick and easy path to power. If Treachery is balanced with other paths, where’s the temptation? Sure, you might be tempted just to violate the tenets of your oath, but making the dark side tempting for its power is completely in keeping with the source fiction. I would use this as written… but I would use them as NPCs only. Everything written about the Treachery paladin shows that they’re grossly unsuited to group play, and they only belong in games where everyone is okay with squabbling and possibly even open PvP violence. I know people that are going to be on this like white on rice (hi Neal!), but it’s definitely not for everyone.

Solid article, and I’m looking forward to the next one. Mearls has tweeted about mystics a few times lately, so it’s good to know that that has been back-burnered rather than ditched. Until we see otherwise, though, I assume the next UA article will be something ranger-related, Crawford’s tweet that they’re not married to alphabetical order notwithstanding.

Get to Know Celestials