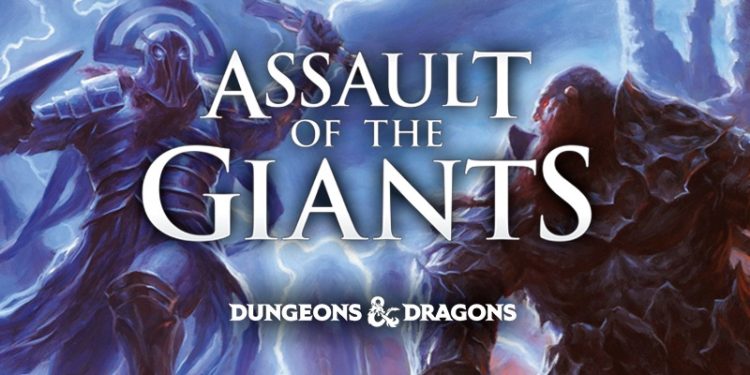 Assault of the Giants is a new Dungeons & Dragons board game designed by Andrew Parks that challenges players to command one of six types of Giants and claim the right to rule over all Giantkind. This is a pretty cool game that utilizes a lot of different game mechanics that I think flowed together very well. I liked that the Giants theme of the game remains true to the Forgotten Realms, and the current D&D Giants season. Also, that the use of the Giant Ordning (pecking order) doesn’t unbalance the game, and actually gives another game dimension. Assault of the Giants is a well thought out game, and it didn’t feel like a repetitive dice rolling game. It really was a pleasure to play a strategically complex and fulfilling game like this. Here is Wizkids’ description of the game for you: 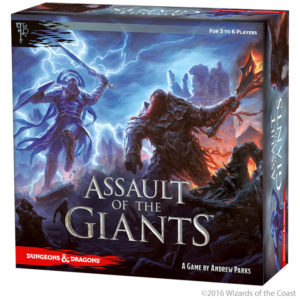 Each player issues commands to his or her Giants in the form of command cards (recruit, move, attack, pillage, and so on). This allows players to recruit new Giants, send them out to attack settlements and other Giants, and also to pursue special agendas based upon their race. For example, the Storm Giants seek to restore their lost monarch, King Hekaton. The Cloud Giants seek an ancient dragon treasure trove, and the Hill Giants seek an abundance of food with which to feed their massive monarch, Chief Guh.

In Assault of the Giants players send their Giants out to wage war on each other and the small folk, but the game’s real strategy lies in each player’s ability to pursue their Giant race’s unique agenda, not only through combat but also through clever card play. 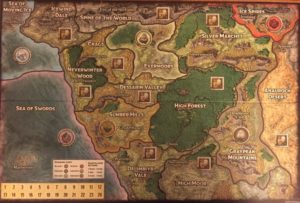 This game is designed for 3 to 6 players, and there are several game mechanics that are used. First the game uses the Command Card mechanic, so that the player has a hand of cards. Chooses one, and then performs a single action that uses that single card. Once the card is used, then other Commands must be chosen on subsequent turns. Choices are reduced as the hand size decreases, but hand size can be reset to the original size by choosing a Command that allows a reset (Rest).

Then there is Dice Rolling that determines outcomes of the Giant Battles. The dice have attacks, blocks, magic and misses marked on them. Damage is determined, and troops are damaged or dispatched. Each of these Battles determines Area Control of Faerûn, and help to complete Events. Each Giant race has a single special dice that they can use to add to their dice pool when making their attack/defend rolls.

Resource management is done with Resource cards, Spell cards, and trading with the discard piles.  The Resource cards are used to fulfill Giant race specific quests that are called Events. While Spell cards have card specific rules, and have many different functions within the game. There is recruitment of Giant units, and that is based number of points you have to spend. You spend an allotment that is determined by the current amount of command cards played, and if you want to expend specific resource cards.

Tell me more about the Game 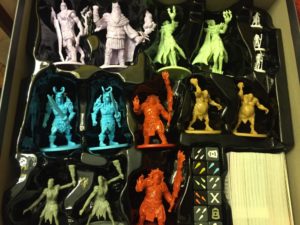 There are 6 Giant races that can be chosen by the players; Storm, Cloud, Fire, Frost, Stone or Hill Giants. Each Giant race & their story goes along with the D&D themed Storm King’s Thunder RPG adventure that is currently out. All of the Giant races are put on the board. So when you have less than 6 players, the Giant races that aren’t chosen are still placed on the board, but as NPCs (non-player characters). The Players get a Giant Champion figure to place along with their other Giant tokens. Your Giants move around the map into regions, in order to take over territories, attack other Giants, and fulfill Exclusive Giant race missions & generic missions that can be completed by any player. The NPC Giants are really there to hinder your progress.  There are also human Giant Killers that can be used by a player to attack other player’s Giants. The sole objective to win is to collect the most Ordning Points (OP), and this is done by defeating other player’s Giants in battle, defeating Giant Slayers, and by completing missions. 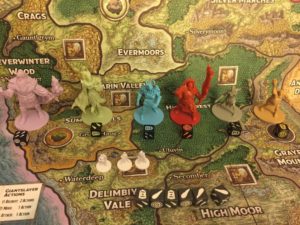 The Giant Champions are represented by the Giant figurines that come with the game. I think they look pretty cool, but a little smaller than the Giants in the Wizkids miniature packs. But that’s okay. The Giant Champions are different colored molded plastic based on the Giant race they represent, while the other three types of Giant Units on the board are represented with tokens (Giant Leader, Elite and Regular).

The miniature figures are about half the size of the miniatures that are sold to play with the D&D tabletop role-playing adventure: Storm King’s Thunder. The Giant Leader, Elite and Regular units are represented by round cardboard Unit Tokens. The tokens have three stats on them for attack, life, and their cost/award value. Flipping the token over shows that they have been damaged with their stats reduced because of their weakened state. Once damaged, the token is removed if damaged again. The Giant Champions have a card that show their stats, and so do the Giant Leaders. The difference being that Giant Champions are not damaged, they can only be taken out if they take damage that meets or exceeds their health. Below is a close up view of the Giant Champion miniatures, click on the Gallery pictures to get a closer look: 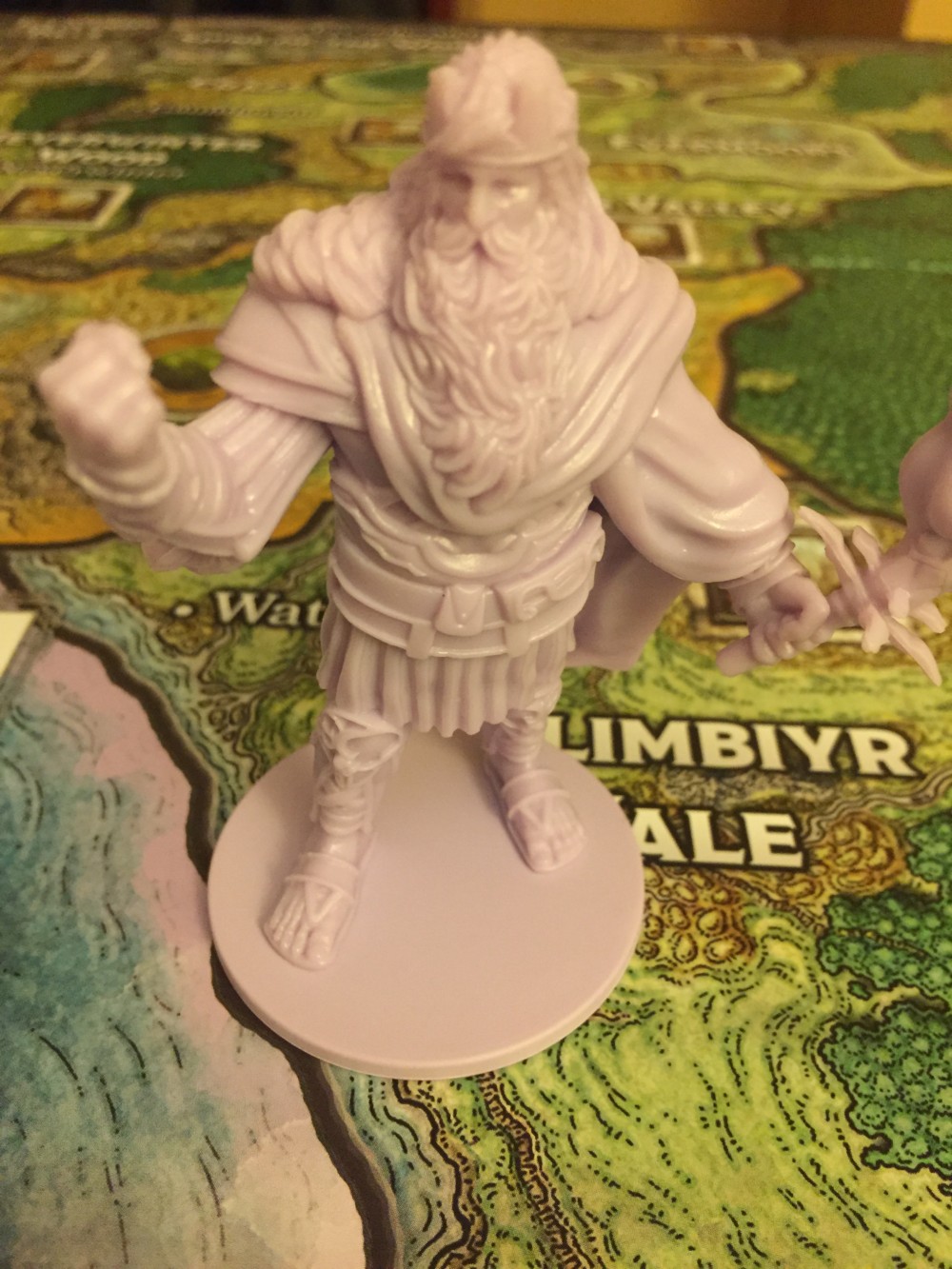 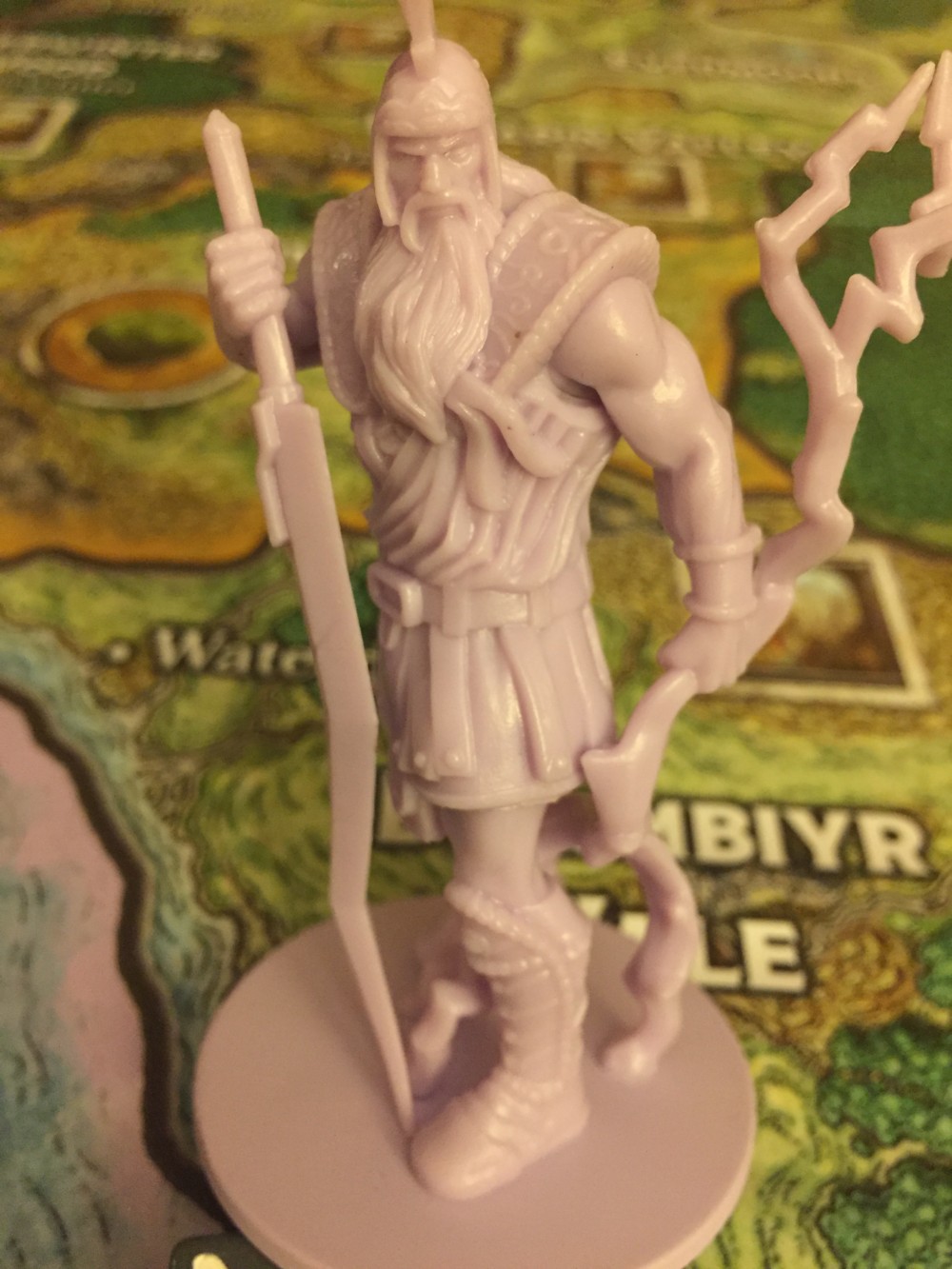 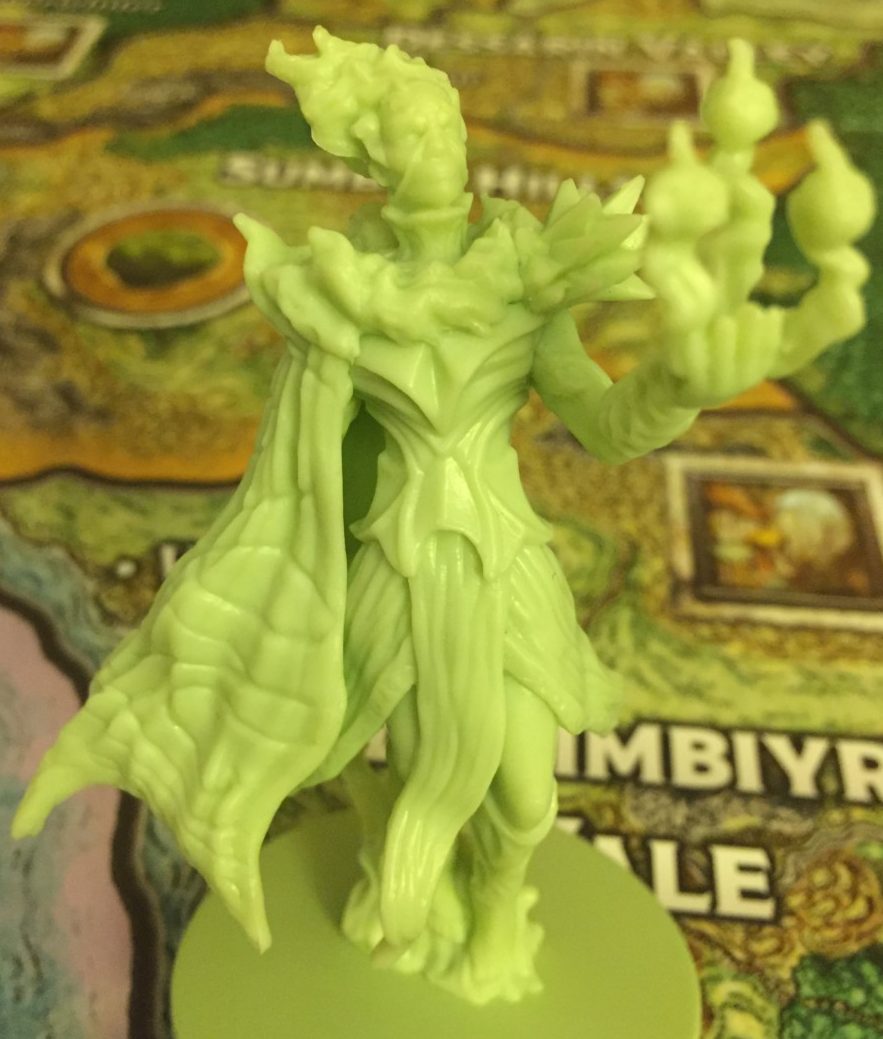 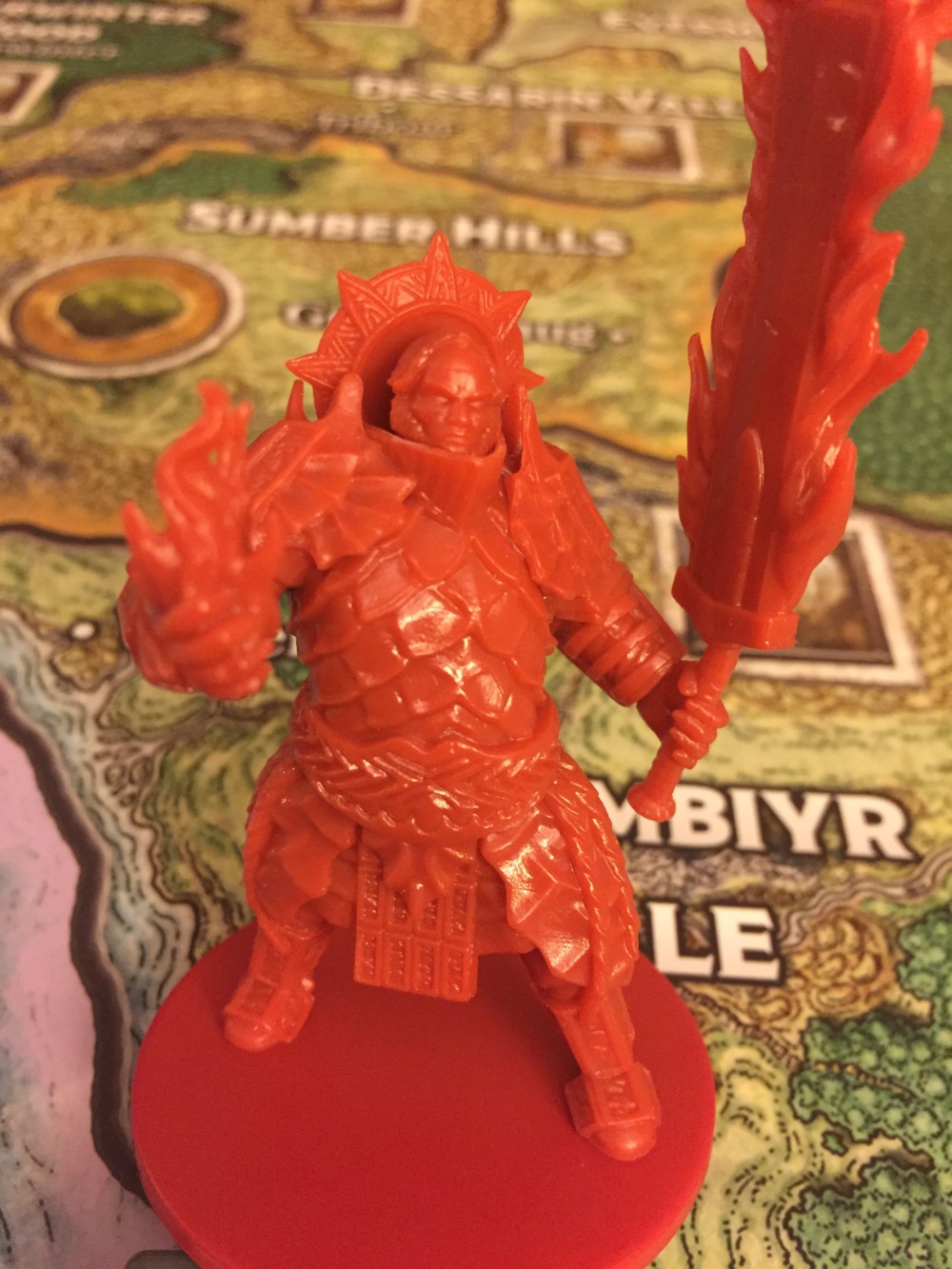 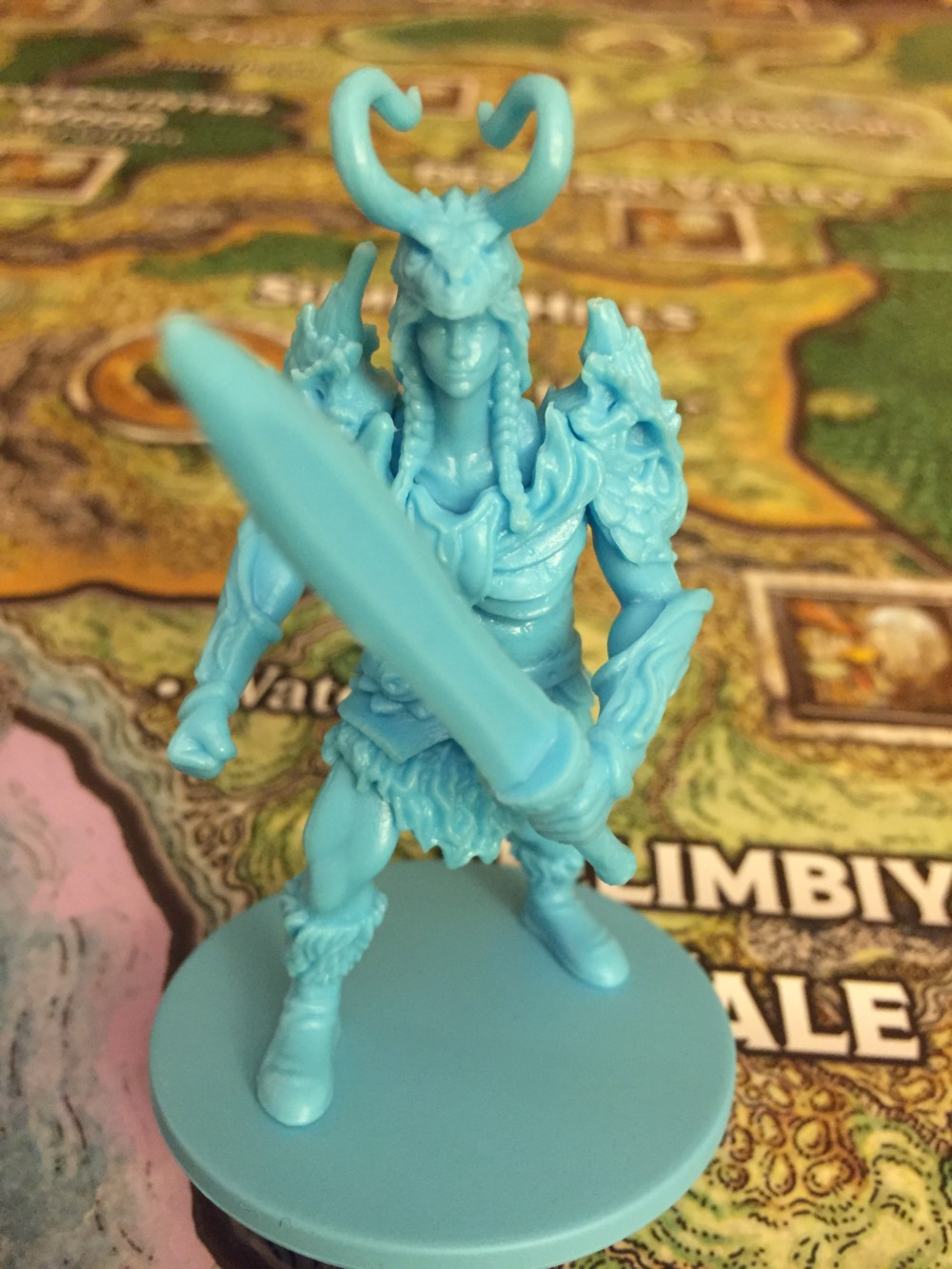 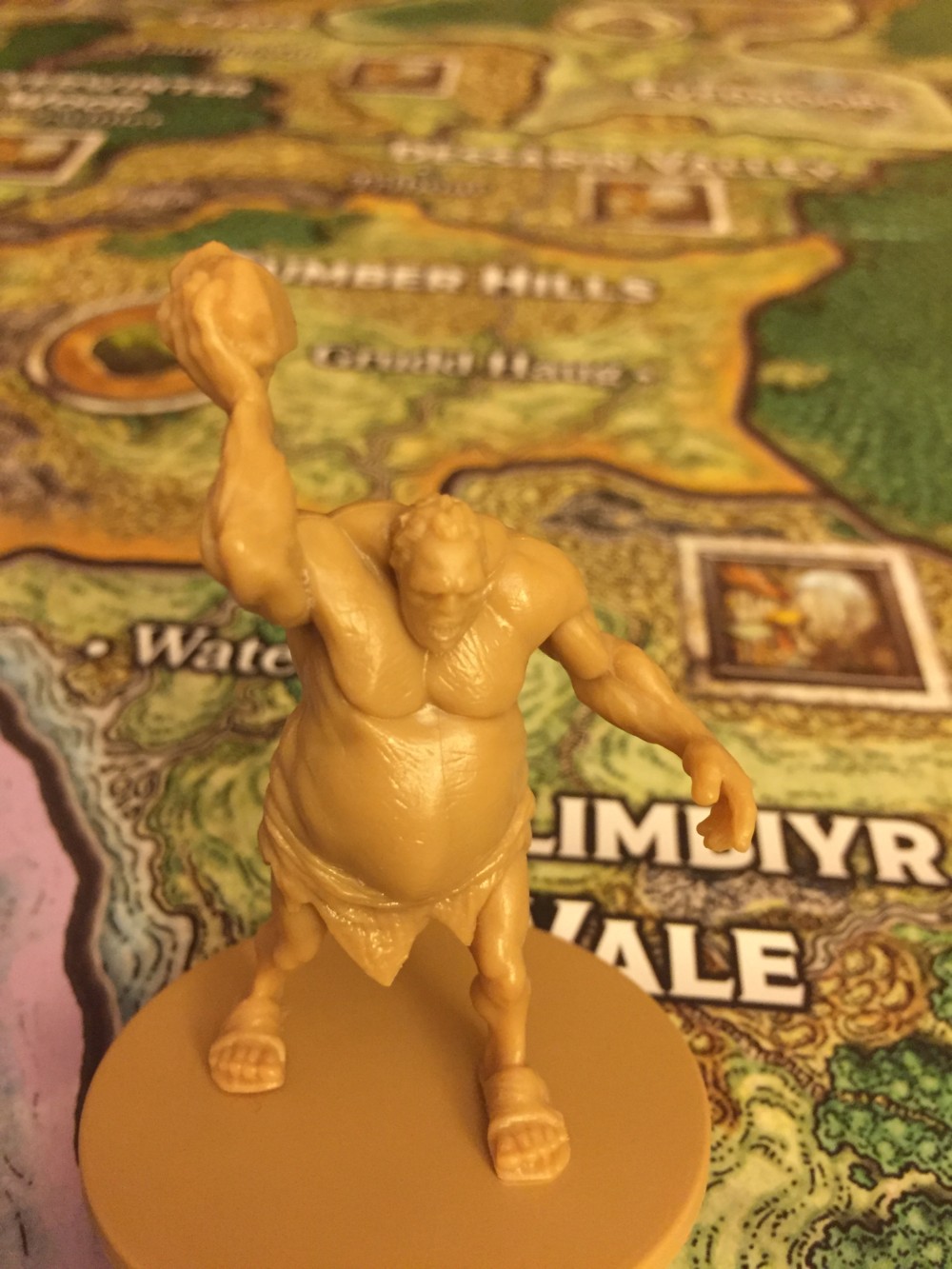 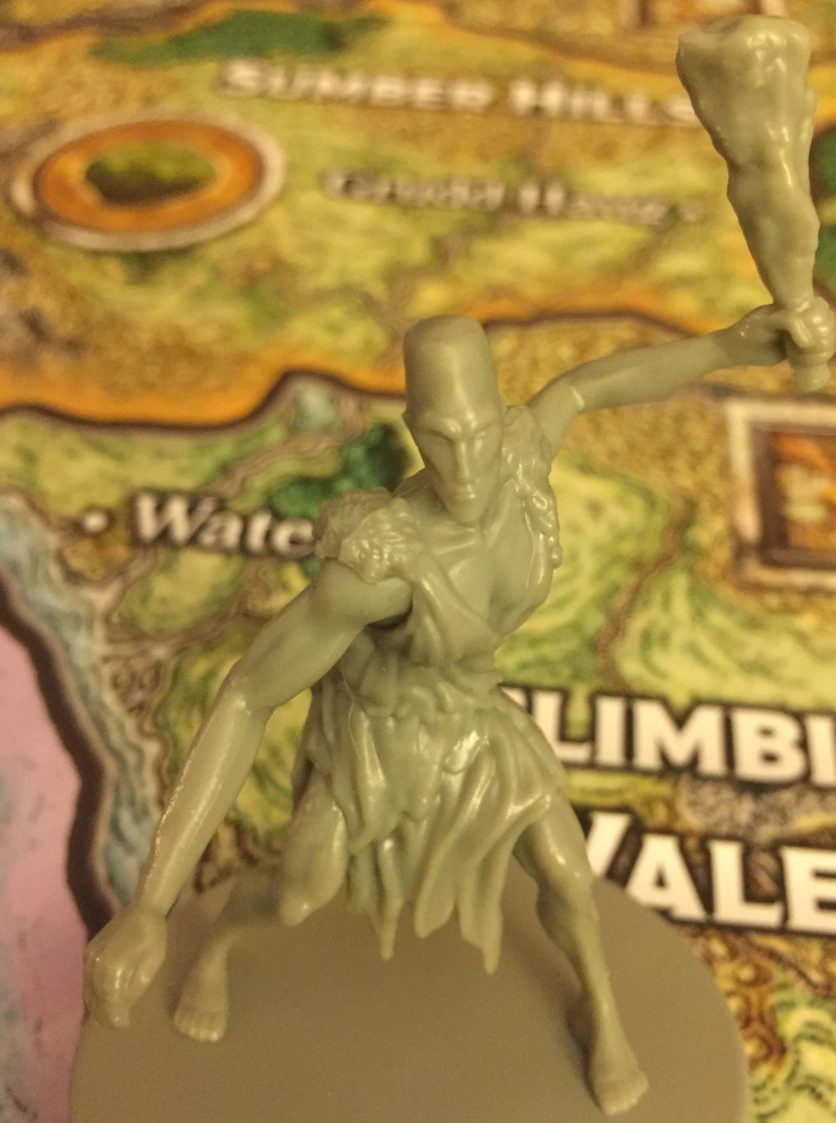 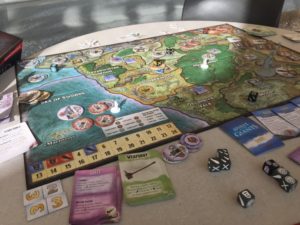 It was pretty cool to slam a Giant Champion down on the game board as it moved around the Sword Coast of Faerûn and crushed your enemies.

Each Giant race has better stats based on the original Ordning with Storm Giants at the top and Hill Giants on the bottom.  Even though the stats are skewed in the favor of the higher Giant Races along with better Attack dice, the low recruitment costs of lower Giant Races and their Mission helps to offset by allowing a Player to buy more Giants and can amass a larger Army quickly.

The Command Card Mechanic of the game works with a set of command cards that is owned by each player. Commands are Move, Plunder/Negotiate, Trade, Recruit, Rest, Leader, Magic, and Attack. There is also one Giant Race specific Special command for each of the Giant races.

From the AotGs Rule-book Page 11: Regardless of whether or not you claim an Event at the start of your turn, you must play one Command Card from your hand before ending your turn. The first time you play a Command Card, place it face up on the left side of your play area, leaving room for more Command Cards to be played in a row to the right of the first Command.

Each turn, a command card is played, and set in front of that player, then the action is performed, and it is the next player’s turn. That way, once a command is played, it is in front of the player and can’t be played again until a Rest command is used. A Rest command will heal a unit, and reset all your command cards by picking them up. You start fresh on your next turn with all 9 commands at your disposal. This can hurt a player that is attacked because Specific cards played early allow the Giant race to perform more powerful attacks and defense later. Other cards like Recruit & Attack, are more powerful if they are played later.  You have to be careful, because you don’t want to be attacked right after playing the Rest command. You can read about all of the commands in the rule book: Assault of the Giants Rule book 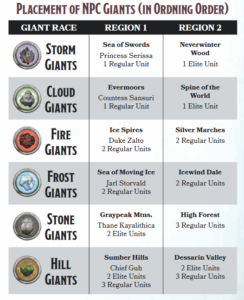 Okay. We did make one little goof during setup. Which I tell you, so that you don’t make the same mistake that I did when you setup to play. We were getting out all of the pieces, choosing the Giant Races that we wanted to play, and then we made the mistake of putting all the other Giant tokens back into the box. Everything back & out of the way.

Fortunately we realized our mistake when we saw the picture to the right in the rule book, before we were really getting into playing game. It did take more time to take out all of the tokens out again, and then we carefully followed the instructions to have all of the Giants represented on the board by using the: Placement of NPC Giants. My bad.

There wasn’t much I didn’t like with how the game played. I actually do think that it could be a two-player game even though it says a minimum of 3. But, the game play might be a little skewed in the favor of one race over another if you choose to play that way. I don’t think it would be that far fetched to pull out the game and play with just two players. It would be nice to give us some official guidelines on how to play with two players. Otherwise, I’m just going to make it up.

As far as the material components of the game, my complaint would lie with all of the cardboard cutouts that are used, and the amount of space that is required to play the game. To play Assault of Giants, you need a lot of table space. A lot. There are several decks of cards to draw from, a pile of tokens that serve as a countdown timer, and all the other pieces that you need. Along with your command cards that you need to play in front of yourself, you unit tokens, and you also you need to keep track of your spells and resource cards. The Ordning Points might have been better served with a small plastic piece of different colors to denote value. Maybe a plastic rock? And the Event tokens could have been a Giant themed flag with a stand, instead of a small cardboard triangle that can get lots on the board, and in the box. But then I’m just being a little nit-picky and searching for something to not like. And I understand that those changes would just increases the production costs of the game, and ultimately the final price of the game which is already at a $79.99 MSRP. But I will probably add those hacks to my game to use at home when we play.

The game can be very fast paced because you take one action and then it’s the next player’s turn. The setup didn’t take that long after I sorted out all the different tokens, cards and dice, and we caught onto the rules fairly quickly after going through them in about 10 minutes.

I really like the strategic play-ability of the game. The game does have a complexity level with several different game mechanics that can accidentally be overlooked the first time you play. Fortunately the rule-book gives some clear strategy tips for each Giant race for new players which is helpful. I thoroughly enjoyed the game, and I liked it even more as we played it. There is lot of deep strategy that can be used to make decisions, and also there is the element of backstabbing when you add more players and alliances into the game.

The Game is scheduled to be released next week on February 15, 2017