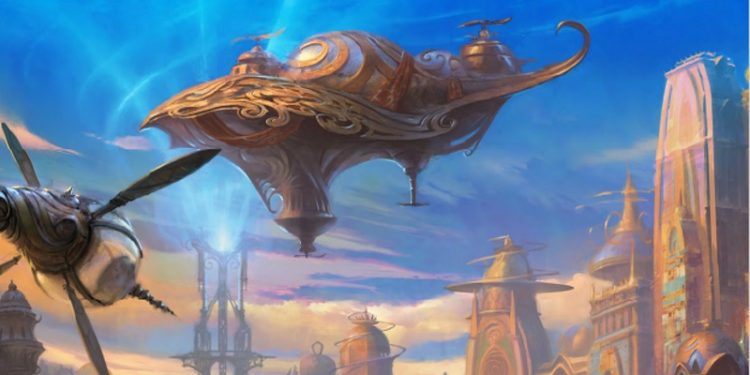 It turns out that new Plane Shifts aren’t necessarily released in connection with Unearthed Arcana. News to me… but here we are! I’ve been out of touch with M:tG long enough that I’m coming into this without knowing one word about the plane of Kaladesh, but James Wyatt seems to know that might be common among the readers of this document, and he’s prepared for it.

Well, right off the bat, this looks a lot like Mechanus, but all of the modrons have been replaced with people dedicated to innovation. Aesthetically, it’s also on friendly terms with Eberron’s lightning rail and similar magitech. The fundamental rules of Kaladesh promise to be a real challenge to combine with 5e – spellcasting without a device as a proxy is rare and ruthlessly suppressed, which locks out most of the character classes. Druids and rangers get a pass, though you have to be an elf. Most spellcasters are sorcerers, and any other spellcasting class is viewed as a sorcerer (with the aforementioned ruthless suppression). If you’ve been waiting for the opportune moment to play an artificer, though, Kaladesh is here for you – that class’s concept is the centerpiece of the whole setting.

There is, however, a new sorcerous origin to cover pyromancy, which is an outstanding exception. So, briefly:

It’s about as straightforward an expression of the concept as you could want, including its tackling of the problem of the fire mage.

The text also goes through the core Backgrounds and discusses how each one fits into Kaladesh – particularly whether they are more likely to side with the Consulate or the renegades. It’s pretty clear to me that Guild Artisan is where it’s at in Kaladesh – the most “normal” of all Backgrounds here.

From the looks of things, Kaladesh is really about two things: magic items, called inventions (and the aether that fuels them), and the conflict between the Consulate and renegades. Abilities that are innate to a character – class features, for instance – are broadly de-emphasized here, putting me in mind of games like Into the Odd or Gamma World, though with quite a different tone from either.

In keeping with the focus on magic items, there are variant rules for magic items here. The rules on charged magic items are setting-defining – instead of regaining charges on their own, the aether to power each magic item comes from the Consulate, who go out of their way to make sure it is distributed fairly. The story possibilities here write themselves – start with “the regime controls and guarantees your daily gasoline ration, if you play by their rules” and go from there. Anyway, most of the rules just talk about how to fit or reskin D&D’s categories of magic items to suit the setting.

Next up are rules for inventing, manufacturing, buying, and selling devices. 5e’s existing rules for crafting magic items are a half-page of disappointment (everything worth making takes longer to make than you have to spend on it), so I had a lot of hope that the ready availability of devices and the central role of invention to the setting would drive the creation of new rules. Not… exactly.

There are rules for creating device schematics if you don’t already have them, so that’s good. On the other hand, those rules add a simple pass/fail check to each day of work on the magic item. It amounts to a group Arcana check that only one character needs to succeed. I’m still not convinced that this is serving the needs of the setting very well. Looking at the classes and Backgrounds, relatively few characters are going to have proficiency in Arcana; at minimum, the Guild Artisan should switch out a skill for Arcana.

The buying and selling rules are on point, though, potentially even opening up space for arbitrage as a sideline to gameplay. Inventing a new device is even better, though it helps if you’re on speaking terms with the Consulate. Aether-powered creatures and conveyances get a few paragraphs as well; these rules seem fine (and phenomenal for selling the setting to the players in the opening moments of gameplay, sort of like the opening shots of spacecraft in every Star Wars movie).

There are two new feats, Quicksmithing and Servo Crafting. Quicksmithing is basically Ritual Caster with the rock gnome Tinker feature bolted on. I like it in this usage. Servo Crafting grants find familiar and some of the functions one wants out of a familiar. Pro tip: if you want to make D&D appeal to first-time gamers faster, retool this back to fantasy pets and make it a readily available or outright universal feature. People like pets, and we should be moving to support that in more settings.

The document proposes three campaign models for a Kaladesh campaign, though the rest of the text pushes the first one, Aether Revolt, hard enough that I kind of wish Wyatt had just spent a few hundred more words on guidance in making that campaign model sing. Oh, sure, it’s outside the scope of this work – it’s just something I’d like to read! Anyway, Aether Revolt has a lot of appeal to me, and Urban Intrigue is good too; Exploring and Colonizing the Wilds seems to miss the point, and the text says as much.

The last major piece of player-facing rules covers the races of Kaladesh. The Aetherborn are pretty interesting, if deeply alien; their Blue-and-Orange morality (beware TV Tropes, it exists so you won’t get anything done this month), based on radical hedonism, means that players of aetherborn need to put some serious thought into why they join other PCs and do adventurous things. The optional Gift of the Aetherborn feature makes them a lot more likely to be evil, but also a lot more interesting – their mechanics are otherwise entirely straightforward.

The dwarves of Kaladesh are mostly hill dwarves, but they trade Dwarven Combat Training, Tool Proficiency, and Stonecunning for Artisan’s Expertise: Expertise in two tool proficiencies and all the effects of Stonecunning, but based on architecture. It’s a solid setup for dwarves who have no connection to subterranean living.

The elves of Kaladesh shift Elven Weapon Training back to the core of the race. Wood elves become Bishtahar and Tirahar, and high elves become Vahadar (city elves, basically).

Humans in Kaladesh use the core human rules, with no Variant option. Oh, how I long for humans to be something more than the Best at Being Generic.

Finally, Vedalken may not look like gnomes (they mostly look like Zotoh Zhaan from Farscape), but mechanically, they’re rock gnomes sans the Tinker feature. In personality, they’re monomaniacal inventors and academics, with many of the stereotypical flaws of engineers and ivory-tower scholars. Much like the aetherborn, it may take a little thought to fit them into a cohesive party and get them to leave their workshops for the dangerous life of adventuring. They’re pretty cool all the same.

The rest of the document is a bestiary of Kaladesh, both new creatures and discussions of how to adapt creatures from the Monster Manual to the setting. It’s true of the whole document, but this section especially benefits from the incredible wealth of evocative art that Magic creates around their settings.

Plane Shift: Kaladesh can’t easily be used as a standalone document to run a Kaladesh campaign; the setting has so many ideas bouncing around at high velocity that you’ll really need additional materials. Some are available for free on the M:tG website, but if you’re comfortable spending a little money, The Art of Magic: the Gathering – Kaladesh is basically your setting bible. For my own use, I would strongly consider a short-run Kaladesh game, as its style is different enough from my defaults that I think my players would find it refreshing. Even more than that, though, it suits my wife’s DMing style perfectly, so maybe I’ll try to get her to do it…