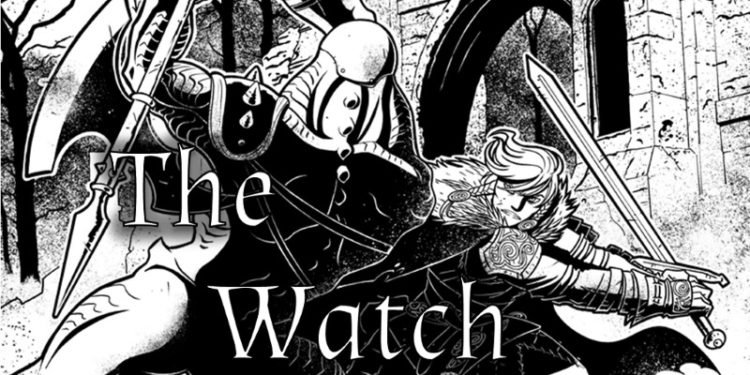 I spend a lot of time here analyzing game design, and today I’m studying a new game, still in its Kickstarter run, called The Watch. It is part of the Powered by the Apocalypse family, but the core story of The Watch is so sympathetic to D&D that there are some great lessons to learn, even if PBTA isn’t your thing. To be super clear, I am basing all of my comments on the current draft that is shared with backers, so there may be any number of changes between this document and the final.

What Is This Thing?

The Kickstarter page offers a better pitch for the game than I could write, but the ultra-brief version is that you play heroic women (specifically women, it’s the point of this product) warriors who push back the spread of the Shadow from their lands and semi-nomadic, seemingly classical or Dark Ages society. Gameplay essentially alternates between missions and between-mission downtime, but unlike most games, it looks like The Watch’s greater emphasis is on the between-mission downtime – the interactions, social politics, and dealing-with-consequences phase.

If you’re looking for a hack & slash type of game, I’m going to go ahead and say this isn’t for you.

The game has an overt political mission, and if you object to that, I don’t really need to hear about it.

What particularly interests me about this game are its three different tracks of Consequences: Harm, Weary, and Jaded. Harm is physical damage, and with only three Harm boxes to check, the characters are going to suffer great harm. The consequences are pretty brutal, but the worst-case scenario still gives the player a choice between stat loss and maiming or a glorious death. You can keep going with stat-loss-and-maiming, but The Watch’s tone suggests that you should be comfortable with untimely demise and celebrate it as a memorable part of the narrative.

Weary is fatigue, primarily emotional. Its track is four boxes long, and when this track is full you reach an emotional breaking point, potentially damaging your Camaraderie with your allies. This clears your current Weary boxes. Many PBTA games have stats for how you connect to other characters, whether they call those stats Bonds, Hx, or whatever; The Watch has Camaraderie, and in addition to being a source of experience gain, you can spend it to improve rolls after seeing the roll result. With The Watch’s 2d6+modifiers range of results, and the traditional PBTA 6-, 7-9, 10+ results, this can make a huge difference.

Jaded is spiritual fatigue and the corrupting power of the Shadow. Its track is five boxes long, and when its track is full you gain a new feature from a separate list of Jaded Moves (Edit: which you can take in any order, but you want to avoid the fifth one). Jaded Moves are very potent, but the fifth one (that is, you’ve checked 25 Jaded boxes) forces character retirement in one of several unpleasant ways. Many of the Jaded Moves carry an additional cost in more Jaded, but they are very appealing, potent moves. The thematic connection between the move and the Shadow’s corrupting force is sometimes clear and sometimes less so.

Clearing Jaded is extremely difficult; one XP advancement option lets you erase a Jaded Move and take it again the next time you fill your Jaded track, and not a lot else. You need to finish the Final Confrontation before you break, because on a long enough timeline, breaking is inevitable. There are a lot of unavoidable Jaded points, but if you have 30 Jaded boxes to play with over the course of play, there have to be a lot if that track is going to provide any interest or pressure.

Since I’ve mentioned the Final Confrontation and the hard upper limit on character playability, I should explain that the game isn’t fundamentally open-ended, though there’s a lot of room to make each campaign different within existing constraints. A campaign of The Watch has exactly fourteen missions, chosen from a list. The nature of the Shadow is likewise chosen from a list. It’s very much like reading the 5e DMG’s guidance on adventure and villain creation, but instead of “here are some ideas,” it just says “do this.” To be clear, I don’t think there’s anything wrong with a more nailed-down structure, as a design premise. As much rules-hacking as goes on in any PBTA community, if you want some other structure, just do it. This is like having a loosely-structured Adventure Path built into the rules.

What Can Other Games Learn?

Now, as you have undoubtedly surmised from my years of writing, most of my gaming these days takes place in D&D 5e. One of the things that most appeals to me is how the interactions between missions encourage character development and build stronger narrative connections between characters. The Watch has five moves governing interactions between missions, both with PCs and NPCs. Two of them, Blow Off Steam and Open Up to Someone, are the major sources of Camaraderie and reducing Weary, and they can grant a benefit called +1 forward, which is a big deal in PBTA.

This is, blatantly, the game paying you to engage with other characters. The risk – as with literally any roleplaying game – is that the players and the game-runner (known in The Watch as the Mistress of Ceremonies) gloss over portrayal and describing things for one another, reducing everything to declaration, roll, and result. Just, I dunno, don’t do this. Play with sincerity – the game wants moments of vulnerability and sharing emotional burdens.

D&D 5e’s short and long rests are solid parallels of these between-mission scenes. That’s when players cast information-gathering spells, recover hit points, refresh some of their powers, and so on. The only difference is that The Watch also tracks emotional fatigue and connection, and you can improve both of those during rests.

The optional Sanity rules are really the only “emotional wear and tear” track in 5e, and those numbers aren’t intended to fluctuate quite as much as Weary does in The Watch. Mental conditions like charmed and frightened are almost always cleared by the end of the fight. The Exhaustion track is too punishing to step in for Weary. All that said, a new condition track might be worth exploring, or you can use this as a full replacement for 5e’s awkward Inspiration system.

Maybe players list one another as stats on their character sheets, and gain Camaraderie up to 3 or 5 or whatever makes you happy. When using the Help action or otherwise clearly acting in support of one another, spend 1 Camaraderie to improve the d20 roll (improve downward, if it’s an enemy’s attack roll against your buddy) by… let’s say 1d4 or 1d6.

Any such scene needs, if not immediately present conflict, still a petitioner and granter (thanks for that lesson, Dramasystem!). Make sure you’re thinking in those terms to keep things interesting, and maybe add a few key suggestions on what the DM is looking for in order to agree that Camaraderie is earned. In D&D, we usually skip most of those short or long rest scenes, or emphasize procedural elements in them, but there are great lessons of deeper characterization in The Watch. Engaging with other players during the rest scenes makes you more potent during the action scenes – that’s a great feedback loop. (Ahem, if I were going to retool 5e to accept this, I would quietly increase a lot of environmental hazard and enemy combatant math by about two points, to apply some extra pressure to earn and spend those Camaraderie dice.)

This is not the only innovative idea in The Watch – far from it. It just jumped out at me as a way to get players to grant as much weight to interaction between the PCs as they do to the next big encounter in the session.

I really like the lightly-sketched setting that Anna Kreider has created here, and more than that I like the details she has nailed down. A list of names and a high-concept for each of the ten tribes is all that players need to get into the game without stopping to brainstorm and negotiate. When you’re ready to go past that, each tribe has two evocative questions to answer, and it would be hard not to shape a strong setting out of even mediocre answers, much less the sparks of awesomeness that will probably happen. The conflicts between the tribes can carry a whole lot of water for making your scenes between missions compelling.

The game’s sense of desperate battle against the Shadow is exactly the balance that I strive for in my own campaigns. It’s clear that luck might get you through one or two missions unscathed, but when luck eventually deserts you, and it will, you will have some bad problems if you didn’t build your team’s Camaraderie when you had the chance. Even then, you’re going to lose people – probably a PC or two, but definitely a long list of allied NPCs. Mission Complications, and especially the late-game Devastating Complications, keep the characters vulnerable and emphasize the guts that it takes to keep going.

I admit that I have a very hard time with the way the game handles missions: make this set of dice rolls, in order, and when you have all of the results, negotiate out the story of what happened. All but the Final Confrontation are, in a sense, told in flashback, and you don’t make the kinds of reactive choices that years of gaming have undoubtedly taught you to expect. If and when I get a chance to play or run The Watch, I’ll be curious to see how that feels at the table. The one clear positive is that you can get through a whole lot of campaign story in just a few hours of play.

The Kickstarter for The Watch has just a few days left. If what I’ve said sounds interesting, go forth and back it. (And sure, I’d love to see them crush a few more Stretch Goals.)