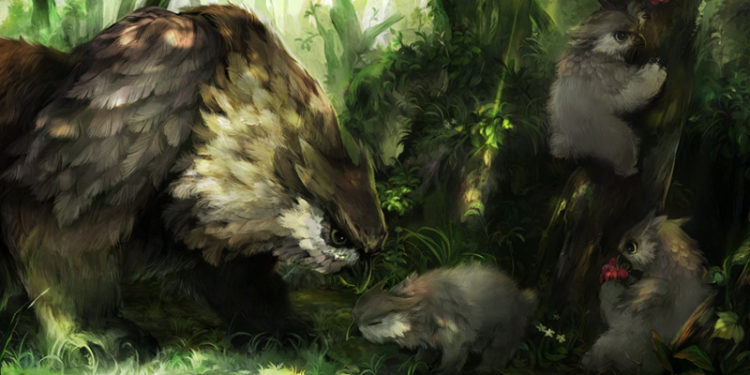 Your group of adventurers are traveling from point A to point B. A random monster jumps out of the bushes! The Gamemaster (GM) rolled on a random table and you encounter a hungry owlbear who roars and attacks. You fight and defeat the monster and eventually arrive at your destination with some scratches and bruises. Hey, we’ve all been there as players or GMs. There are even groups that love to explore the wilderness hex by hex and see what pops up. It doesn’t take much work to make this type of random encounter just a little more engaging. This week on the Campaign Trail I’m going to look at creating engaging random encounters.

Usually I try to keep ahead of my players and map out all of the destinations they might want to visit, prepping exploration, social and combat encounters that fit into the story. But players like to come up with ideas GMs didn’t think of and they we find ourselves scrambling for a random encounter to fill the session. In a previous posts, I have looked at improvisation using Fate Dice and Story Cubes. This time I am going to use random tables to create the story. Let’s look at creating a few short tables to cover each type of gameplay, while the players are traveling across the dangerous lands between two points of light in my current campaign’s setting. The characters are in the Nentir Vale and need to travel through the Harken Forest to get from the town of Fallcrest to a village in the Harkenwold two days travel to the east.

Here are some example random tables that would work for my home game. I could have just used a random table of combat encounters, but they’ll be more interesting if they were potentially hinted at earlier.

It might make the most sense to roll on all three tables at once, or just roll and see how it feels and pick what works the best.

As the party is traveling through the forest, let’s have them come across some interesting stuff. Some of these can lead to further exploration and some can be previews of potential upcoming combat encounters.

You never know who you are going to meet out in the forest. In these social encounters, players should have the potential to be able to gather information that adds onto the exploration details, previewing the dangers of potential combat encounters.

It’s time to throw a combat encounter at the players. These encounters shouldn’t all just be random and players should feel that they were led up to during exploration and social encounters. You might just decide to pick something that matches what you rolled in the exploration table.

I created these tables to have on hand in case my players decided they wanted to travel through a forest and I have tables for grassland, mountains and swamp too. These are just an example and far from perfect, but they would work for a group of low level PCs traveling through a forest in my setting.

Try creating some of your own that fit your setting and story. Share your own ideas or let me know what you think of this article in the comments below.