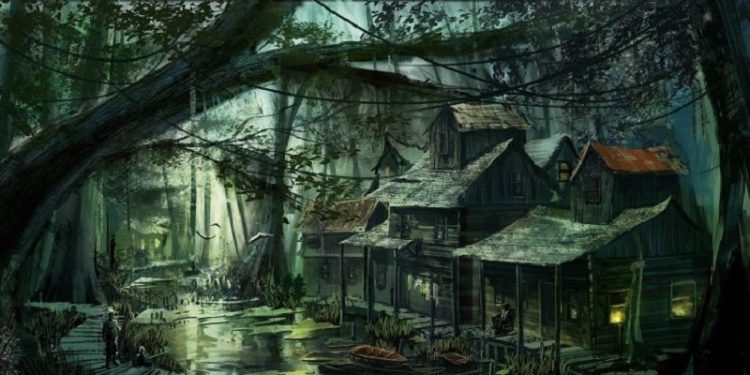 The city of Quaymire is a coastal city in the perpetually fogbound swamp, although the name “city” is a bit of a misnomer because the settlement itself is little more than a series of interconnected docks, a dozen some odd buildings, and a large building that serves as the town’s meeting hall, sole bar and inn, as well as a few sparse huts scattered all throughout the area, prone to flooding when the water levels rise during rainy season. Often called “The City in the Swamp” “Quagmire Demesne” by those who have been kidnapped because of the fact that it’s basically inescapable without advanced preparation and extreme amounts of teamwork, though a few have escaped and lived to tell the tale.

The majority of the city’s inhabitants (if they can be called that) are actually monstrous humanoids interspersed in the swamplands, waterways, and caves where the lizardfolk, Kuo-Toa, Sahuagin, and a few hags live. In addition to the monstrous humanoids, the swamplands themselves are to an aboleth and its slaves, as well as a black dragon and a few kobolds who revere it as a god. The swamp is also home to some reasonably normal dangers. It is home to a particularly nasty biting fly that can transmit a virulent infection called the Swamp Flu, causing fevers, chills and hallucinations. Most of the natural inhabitants are immune to this fever. The hags have found a cure and are willing to provide it, for a price. But it’s not something they have laying around, the ingredients must be gathered and the cure must be made, because the potion is highly perishable. The swamp is also home to leeches, normal and dire alligators and crocodiles, normal sized and giant snakes, as well as such dangers as assassin vines and a man-eating species of Venus fly traps.

The reason this ‘settlement’ is a recognized thing at all is because that it’s a haven for smugglers and other criminals who want to get away from the law. The only way to get to it is by use of a unique combination of tides and currents that will allow ships to sail deep inland into the swamp. Ships that don’t hit these exactly right end up grounded on the treacherous sandbars, entangled in the deep vegetation, or sunk by large chunks of floating debris from previous ships. Because of the peculiar nature of the fog, it can confuse even the most stalwart ship‘s navigators. 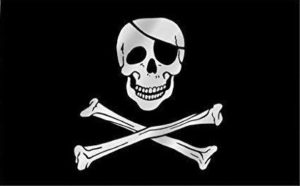 The settlement came about when a pirate smuggler whose name is lost to the annals of time, trying to escape the law came upon the passageway accidentally. When he noticed that the ships that were chasing him kept running aground, he knew he had found an excellent hiding spot. Eventually they gave up after having freed themselves from the shoals. Noting where the passage was, he left, determined to come back and build a settlement there in the middle of the swamp.

Five long years later, after raiding a good number of coastal cities, boarding and capturing the loot from many ships, he returned with laborers, materials and started to build the docks. Unfortunately, for him and his builders the denizens took none too kindly to their presence. Many times the docks were burned and sunk to the bottom of the swamp, causing many casualties in the process, so they made a strategic retreat. As they left the monstrous humanoids celebrated. But the pirates would not give up their newfound hideout that easily. When the pirates returned, they came back with a vengeance, with enough men and firepower to repel the natives back, and at such high losses that eventually the attacks became more and more sporadic. Eventually the docks were built, with magic woven into their construction such that they could not be destroyed easily, and certainly not without heavy losses. When they were done, they dubbed the collection of docks ‘Quaymire.’

Now that the docks was complete, they were set to start the next phase of building – constructing the town itself. The pirates, in building the quay, knew that the swamp was too soggy to support any sort of structures. They knew they needed to firm up a section of the swamp by creating footings for the buildings. But they knew that they couldn’t do it by themselves. The pirates approached the denizens of the swamp and offered them a deal they couldn’t refuse. Work together with them or be destroyed. If they were willing to put aside their differences and work with them, it would be mutually beneficial for all parties involved. The plan was simple: lure ships to chase them into the quay and scuttle them. The monstrous humanoids would be able to get anything valuable they wanted. The wood, metal, and stone the ships contained would be the town’s footings held together with netting stretched between waterlogged patches of land. Whereas many of the ship’s crew were turned over to the aboleth as slaves, who forced them to work to build the town, some willingly joined the pirates. A few were turned over to the dragon as well as playthings.

With this syndicate complete, the town was slowly built. Even to this day, on occasion a ship will stray into the swamp and will be sunk, the materials used to help build the town.

Order is maintained by the Pirate’s Council, which has members of the lizardfolk, Kuo-Toa, Sahuagin, aboleth, and hags. They form a loose government that squashes any resistance.

Because the town is so remote and so hidden, the town does not have any official trade. That’s not to say that the town does no trade. The trade that it “officially” does is black market items, slaves, and a unique undead specific to the swamps: the acid skeleton*.

Unofficially, the Hag’s cure for the swamp fever is also an export, as it is a panacea for other types of ailments, but it needs to be transported quickly and taken within 48 hours of creation.

* Acid Skeletons are the result of the skeletons of the aboleth slaves being breathed on by a black dragon. The acid burns away the flesh, embedding itself in the bones of the skeleton. The slime protects the skeleton from eating the bones. When raised as an undead, they can spit acid as per the acid arrow spell every 3 rounds. When they die, everyone in a 10 foot radius must save vs reflex or take 6d4+4 damage, save for half, and the damage will repeat every round for 3 rounds thereafter unless something is done to negate the acid damage. Use standard stats for a skeleton of their type for all other stats, but with max HP.

For a “society” built on the ruins of so many lives, one would think that crime would be rampant. It’s not. Some of the reason is that Pirates both run and police the place.  The other half of the equation is that there’s not a whole heck of a lot there that’s not theirs already or that they didn’t build from the ground up.

Petty crimes, like drunkenness and fighting, they typically overlook. But if murder, theft, or sexual assault is involved, they get involved immediately. If a crime is serious enough to warrant their attention, they can choose enact the death penalty without judge or jury.

Because the town is so small, anyone who defies the order of the Pirate’s Council repeatedly gets turned over to the aboleths as a slave.

Ironically enough, because of the deal with the Pirates to help sink the ships, the monstrous humanoids have been gaining in power. When people visit the monstrous humanoids in their own environment, they often marvel at what was salvaged from the sinking ships. Some users have at the displays to be the wealth of a castle, without the walls. They are willing to part with most, if not all, of their trinkets, if a good enough offer is made.

The pirates of Quaymire pay a bit more than lip service to the gods of storms, the gods of the oceans, as well as the gods of the swamps due to their fickle nature. If they can be convinced that something is an omen that would offend one of these beings, who knows what they would do?

There are a variety of ways that adventurers could end up in Quaymire. The first is that they are on a ship that is captured, and they need to figure out how to escape. Another other way is for the PCs to hear of a sunken ship, the treasure of which the PCs need to obtain, and they trace the ship to the Quay. Conversely, a missing ship or crew could be the cause of their investigation. A further option to get PCs involved would be for them to hear of the hag’s Swamp Fever cure and track down the swamp where they live. A final option would be to have a captured monstrous humanoid tell of the location and offer to take them for the “wealth beyond imagining.”

* Population includes both Monstrous Humanoids as well as “Standard” races