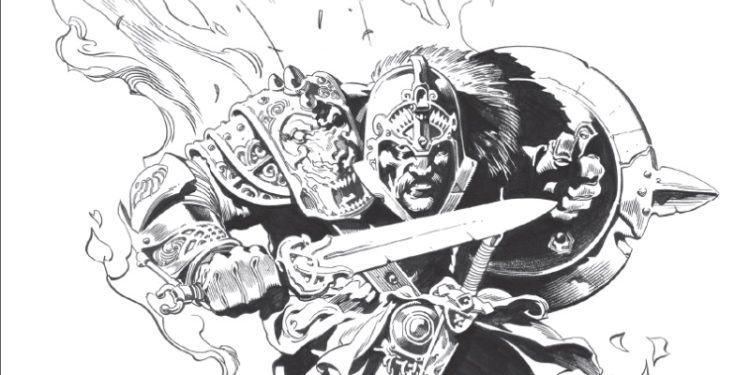 I listened to your votes in the comments thread of my last article, and promptly ignored them when my wife voiced an opinion. Isn’t democracy great? So today we proceed with the History of the Fighter, which I anticipate to be one of the longest series in the whole of this column. If it passes the History of Domain Rulership, it’s gotten serious. That said, some individual iterations may be surprisingly brief, since the essence of early-edition fighters is simplicity.

Since I’m not willing to dig back into Chainmail for this (sorry-not-sorry), we’re starting with Book I: Men & Magic from the original three-booklet set. Now, this is the first class I’ve covered from the original set – the only classes in evidence here are Fighting-Man, Magic-User, and Cleric – and the information presentation in this book is so tortured and first-draft-ish that I am absolutely going to miss important things.

So, first things first, this is the era of the game in which the class is called “Fighting-Man,” the term “fighter” or “warrior” being much too clear and simple. I’m sure it makes sense if Chainmail is all you know, but it looks like making an extra effort to be tone-deaf from the perspective of the early 90s (when I got my start), much less any later time.

There isn’t any visible theme here, beyond The Everyman Who Becomes a Hero, but the Fighting-Man is deliberately the simplest class in the game to play. Even if you aren’t bad at picking names, picking a name might still be the slowest part of character creation, because choosing Fighting-Man is literally your only other choice point unless you decide to get fancy with the 2:1 or 3:1 ability score tradeoff business. (Don’t do it, it’s a bad deal if your DM eventually opens the door to Supplement I.) Spoiler, over the course of the next 43 years, the fighter is still going to be the quintessential Everyman, though you’ll increasingly be free to bolt on theme in one way or another. The point at which the tabula is no longer rasa moves around a bit from edition to edition; in the original books, I’d argue that that happens at 9th level.

The text does explicitly call out that Magic-Users are very weak at low levels, but become powerful later as long as their Fighting-Men friends protect them. Magic-Users are what MOBA players call a Carry class, while Fighting-Men grow up to discover that they really were just grogs all along.

Well, right off the bat, this class is named Fighter, so that’s different. Mechanically, the differences are superficially slim, but really they’re just well-hidden in the text outside of the class writeup itself.

This doesn’t exactly bring us to the end of the OD&D fighter class, but that’s as many versions as I’m covering within OD&D. For that matter, there might also be a dozen more feature buried in the Rules Cyclopedia that I am not spotting. I think there’s something with how fighters become Immortals? Outside the scope of this article, in any case. The apparent trend-line is – of course – increasing complexity and options, though Rules Cyclopedia pushes most of those options off until you’ve had plenty of time to familiarize yourself with the fighter’s game loop and you’re ready for a shakeup. (Or it’s that thing that is forever out of reach, because 8th level takes a ton of experience points.) It’s kind of interesting that you start to branch out with combat options one level before the whole campaign potentially shifts into domain rulership or paladinhood or whatever other major shift happens at the all-important 9th (Name) level. It suggests that games really ought to reach such levels quickly, since there are still 28 more levels of play to experience. I always wonder how people used BECMI and the Rules Cyclopedia – did they almost exclusively play games that ended around 5th or 6th level, as the OSR community seems to suggest, or were they (likely teenagers at the time) racing onward to ever greater character levels, since TSR went to the trouble of creating them?

Next time, we’ll move on to AD&D 1e and UA. I suspect there are plenty of Dragon Magazine articles that offer variant Fighting-Men or fighters, so by all means point them out to me.