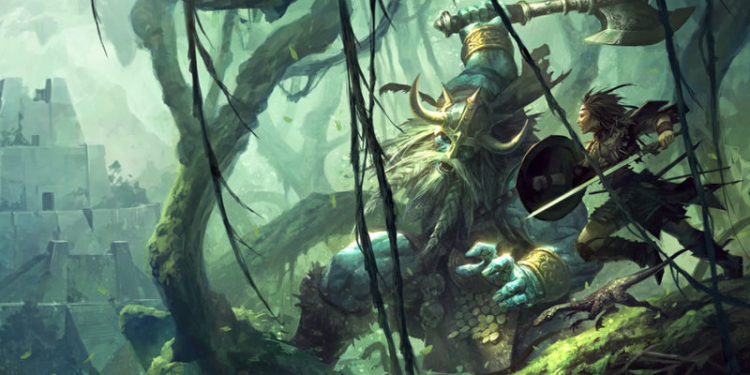 I reviewed Tomb of Annihilation earlier this month and even before I read the book I wanted to run this adventure in Eberron. When Princes of the Apocalypse was released back in 2015, it contained an Appendix C: Adapting to Other Worlds that was 8 pages long. Popular worlds beyond the Forgotten Realms such as Dark Sun, Greyhawk, Dragonlance and Eberron were all given notes on adapting the adventure to those worlds. Anyone hoping to get detailed notes on running Tomb of Annihilation in another setting will find that the notes provided in the book are very minimal. The book briefly states in the introduction that the adventure can be easily adapted to places such as Mystara‘s Savage Coast, Oerth‘s Amedio jungles, or the jungles of Eberron‘s Xen’drik. After reading the book, I totally agree that running this in any official or homebrew world can easily be pulled off.

I am starting a Tomb of Annihilation (ToA) campaign set in Eberron‘s Xen’drik. I really want to use this adventure as is, so I am really going to keep the changes to a minimum. This article will outline some of the minor changes and additions I am looking at to fit the adventure into an my imperfect version of Eberron. Please steal these ideas or provide your own in the comments below.

The goal of this article isn’t to provide a detailed outline for the Eberron setting. But here is a quick primer.

Eberron is an award winning D&D campaign setting created by author and game designer Keith Baker. Eberron was selected from over 11,000 entries in a competition to establish a new D&D world. The campaign setting book released in 2004, was written by Baker, Bill Slavicsek, and James Wyatt. A new version of the Campaign Setting was released in 2009 for 4th edition. In February 2015, an Unearthed Arcana article provided an unofficial update to Eberron for 5th edition.

Most adventures in Eberron are set in a period after a vast destructive war on the continent of Khorvaire. If you can find it in D&D, you can find it in Eberron. The setting combines a fantasy tone with pulp and dark adventure elements, turning many conventions upside down such as gold dragons can be evil, goblins can be law-abiding city folk, and elves can like necromancy. Adventures are full of action, adventure, intrigue and mystery. In Eberron, you’ll find non-traditional fantasy technologies such as trains, airships, and “robots” all powered by magic.

Here is a rework of the blurb from the D&D website’s Tomb of Annihilation page.

The latest talk on the streets and in the taverns of Sharn has been about the so-called death curse: a wasting disease afflicting everyone who’s ever been raised from the dead. Victims grow thinner and weaker each day, slowly but steadily sliding toward the death they once denied.

When they finally succumb, they can’t be raised—and neither can anyone else, regardless of whether they’ve ever received that miracle in the past. Experts in divine and necromatic magic from the most prestigious temples and universities in Khorvaire are at a loss to explain this curse and its cause.

Syndra Silvane, a former explorer and adventurer has discovered the cause is a necromantic artifice called the Soulmonger, which is located somewhere in Xen’drik, a wild and untamed jungle filled land far to the south. She has hired your small group of explorers and adventurers to create an expeditionary force to go south to Xen’drik and secure the Soulmonger and end the death curse.

Starting out in Sharn

ToA begins with a quick meeting in Baldur’s Gate with Syndra Silvane and then a quick teleport to Chult’s largest settlement, Port Nyanzaru. I am going to be changing the meeting place to a location in Sharn, the City of Towers. You can have the players meet Silvane at her home or one of these alternatives:

Xen’drik, is a month long sail from Sharn, so teleporting to Stormreach is a great idea. In Eberron, there are other fast ways to travel to Xen’drik that you might want to look at. Here are some notes for alternative ways of traveling to Xen’drik. 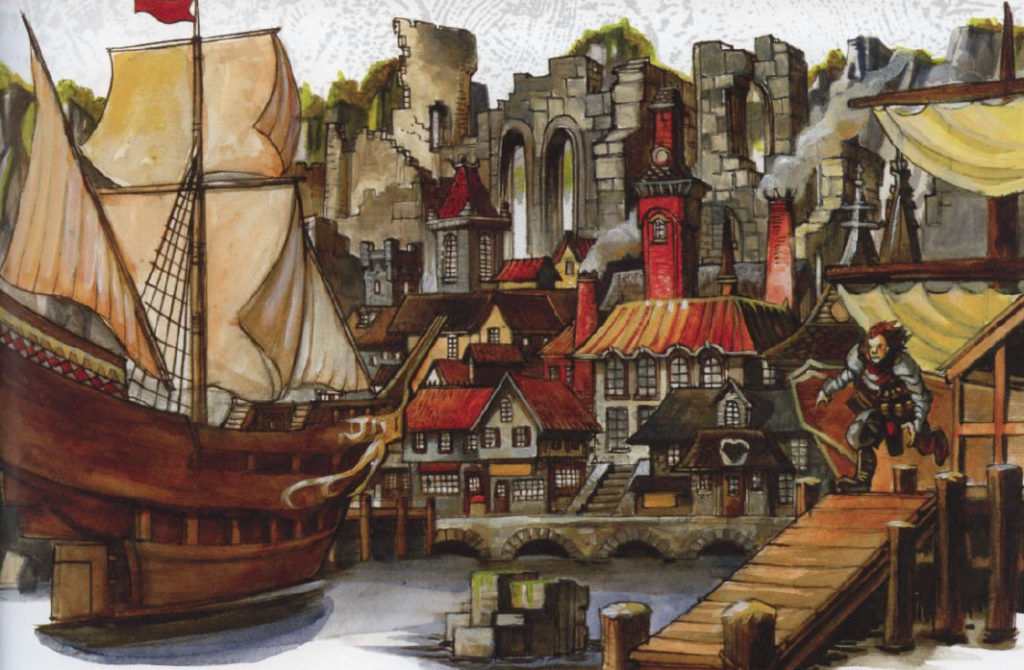 I really like Port Nyanzaru, and I don’t plan to change it too much to match Stormreach. The biggest changes I will make are:

Xen’drik is a wild an unpredictable place. ToA asks the players to explore and avoid getting lost in a vast unexplored region of Chult. When running this in Eberron, something called the Traveller Curse, provides DMs with the ability to steer the players and provides a greater explanation for how mysterious Xen’drik is. The curse, which defies magical explanation, may be the effect of a lingering cataclysm or meddling by the Dark Six. Here are some ideas on how to run the curse:

ToA has plenty of monsters. If you wanted to add some Xen’drik-ness to the story, take a look at adding some of these monsters. You can find stats and lore for these in Secrets of Xen’drik.

There are lots of notes on converting factions from the Sword Coast to Eberron in Princes of the Apocalypse‘s appendices. In Eberron, the Dragonmarked Houses and many other factions are the movers and shakers of the world. Here’s some key factions that can be important players in the adventure:

Dragonshards are magic stones found in Eberron that are used to enhance the powers of a Dragonmark, or in the creation of magic items, artifacts, or constructs. As your players explore Xen’drik, why not have them find (or quest for) a dragonshard. Dragonshards come in three varieties, and Xen’drik is known to be a good place to find golden Siberys dragonshards.

Dragonmarks are an important part of the Eberron setting. Dragonmarks are sources of primordial power and a signs of the Draconic Prophecy. These marks appear as decorative tattoos and provide their bearer with spell-like abilities. UA Eberron provides DMs with the playtest ready Dragonmark Feat to provide us with an option to include dragonmarks in 5th edition.

Previous edition books released for Eberron have lots of equipment options which can easily be converted to 5e such as chapter six of the original Eberron Campaign Guide. I’m tempted to write an entire article just on converting the boomerangs, exotic weapons, smokesticks and acid flasks. The UA Artificer class provides a decent start for providing Eberron flavored equipment and weapons.

Inquisitive’s Kit (50 gp). Made popular by freelance inquisitives, this kit contains some of the most often-used tools of the investigation trade. It includes containers of various shapes and sizes made of glass, metal, and wood; fine silk gloves; mundane dusts and brushes; tweezers, picks, and probes; a magnifying lens; ink and quills; chalk and charcoal; parchment sheets; and a small journal for recording notes. It may grant a bonus on investigation checks made to investigate the scene of a crime or other mystery.

I created a bunch of steampunk equipment. While Eberron uses magic, not steam to create anachronistic technology levels, they match up pretty well. Here are links to all of the equipment lists for you to steal to add onto the equipment list found in the Player’s Handbook.

The Eberron campaign setting introduced action points to reflect characters who are larger-than-life heroes destined for great things. Action points allow a player to add a bonus on any d20 roll so that characters can dodge or at least mitigate the effects of bad luck. Here are the rules converted to D&D 5th Edition provided in the Eberron Unearthed Arcana.