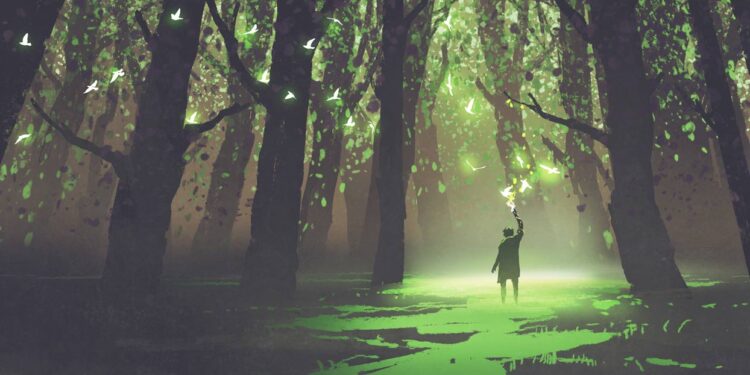 A few readers asked for fey-touched Backgrounds as part of my series on the fey (which will eventually be stitched together into a PDF that you can buy with real money, no fools’-gold need apply). I’ll be presenting six new Backgrounds. As they’re explicitly tied to fey magic, I’m looking for new and different things to do with each Background’s Feature, which may rankle the sensibilities of some.

Captive of the Fey

At some point in your life, you were captured by the fey – most likely the Unseelie, but other Courts are possible as well. You were put to work in some fashion: the Seelie might have used you as a personal valet or scullery worker, while the Unseelie might have thrown you in a lightless cell, but generally find more unsavory uses. Perhaps you even spent years as a leashed terror.

How long were you gone? Is it the same as the amount of time you subjectively experienced? How did your captivity end? Did anyone even notice your absence?

Roll randomly or select one of the tasks below for your primary task during your captivity.

Feature: Back in Chains

Whatever drew the attention of the fey to you before works on others as well. When you are at the mercy of another, they always prefer to capture you rather than kill you, unless you resist capture to the point of death. They do not necessarily understand their own motives in doing so. If you offer yourself as a hostage (perhaps in exchange for another), almost any non-divine creature accepts this trade.

Captives of the fey usually seek to avoid recapture by any means necessary, as they know better than most how cruel even the Seelie can be. They are slow to trust anyone, particularly those who remind them of the fey. This may extend even to mortal spellcasters, simply because a geas or similar magic could bind them into a similar captivity.

You are a very convincing duplicate of an actual person, created by the fey and switched when the person was an infant or very young child. You grew up in the society of mortals and carried on your charade convincingly, as you quickly figured out what happens to changelings who get discovered. (It isn’t pretty.)

The fey magic that created you is so convincing that you have all of the racial features of a normal member of your race. Every changeling has a subtle tell, though, for fey glamour cannot perfectly match the gods’ works of creation. Roll randomly or choose a tell from the Changeling Sign table.

As you live every day of your life with a sense of your own mummery, you can pick out others who live false lives. When you are in a crowd of five of more, you can ask the DM one of the following questions.

You can use this feature once, and regain use of it when you finish a short or long rest.

A changeling is painfully aware of the artificiality of their lives and attitudes, to the point that many have difficulty separating what they want or believe for themselves from what they want or believe as part of their purported identity. Changelings struggle to hide their true natures from a society that utterly rejects them. Some few changelings find a welcome when they reunite with the fey that created and placed them, but far more find that even the fey regard them as non-beings.

The Changeling goes a bit further afield with mechanical intrusion than I would usually want to see in a Background, with a limited-use feature. That said, it’s made from fey magic and should carry appropriate weaknesses. It’s a deeply risky background if the story embraces the design intent, but you’ve always wanted to play pseudo-Pinocchio, right? The other possible approach to this idea is a subrace, but with a lot of races that would sort of give the game away. “Yeah, sure you’re a real wood elf, where the hell is your Fleet of Foot or Mask of the Wild?” Also, the revenant showed us just how awkward a “universal subrace” can get.

Mask-Sense has limited usage because it stands to be such a mystery spoiler, if you can game it carefully. Social information-gathering is a tricky feature niche to write for, but I think if it’s done right it can help players to feel active and useful in substantial interaction scenes.

The Captive’s Feature is something they probably don’t want to use, but if you’re in the kind of campaign where it gets a chance to work, it can build some cool scenes. It does run the risk of splitting the party. The background itself is inspired by Changeling: the Lost, while the Feature is a close lift of the racial disadvantage of gnimari (“Tasty”) from the Wildlands LARP setting.

I currently have four more Fey-Touched Backgrounds planned, in what will presumably be two articles: the Courtly Ward, the Forlorn, the Inspired, and the Oathbreaker. It’s possible that I’ll come up with more, or that I’ll discover that some of these ideas fall apart as I write them.