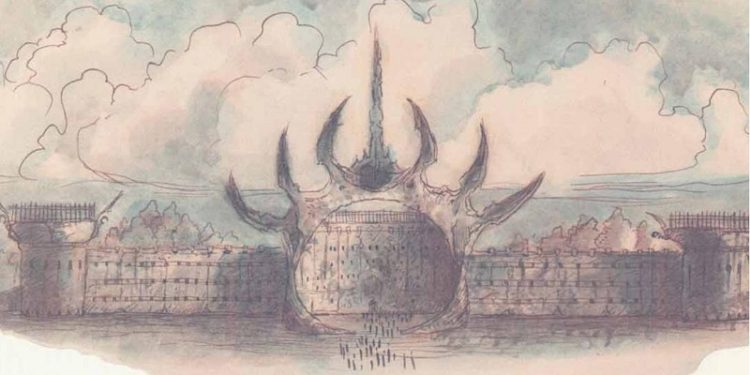 After a brief hiatus, we return to the wonderful world of Planescape faction backgrounds. Today’s selection brings us two of the more plug-and-play factions – the Bleak Cabal and the Fated. These two factions are straight forward when compared to their peers, certainly. Honestly, I had forgotten how neat the Bleak Cabal really is, and revisiting it was a joy. I did not forget what jerkwads the Fated are, however.

Planescape Faction Backgrounds: Athar and Believers of the Source | Mercykillers and Society of Sensation | Dustmen and Xaositects | Bleak Cabal and the Fated

In the multiverse, it is foolish to believe there is any sort of higher plan. There is no great philosophical design. There isn’t an underlying metaphysical design. While this might seem similar on the surface to the beliefs of the Free League or the Xaositects, nothing could be further from the truth. There is no revelry in the chaos of it all. There is no belief that since nothing is true, the only thing that matters in the self. Instead, the Bleakers – one name for members of the Bleak Cabal – believe that since there is no greater truth, it is all the more important for your actions to matter to others. Only you can create your reason for existing.

The Bleak Cabal claims the Gatehouse as their headquarters – a place most other denizens of Sigil avoid. The insane asylum causes fear and discomfort in many otherwise-hardened adventurers. Not so for the Madmen – a moniker given to the members of the Bleak Cabal serving in the Gatehouse. It is here Bleakers learn the core tenets of the faction – charity, aid, and self-creation. If you are not willing to do it yourself and help those who are less fortunate, who will?

As a Bleaker, were you affected by their generosity and chose to give back to others? Were you a resident within the Gatehouse and recovered under their care? Are you looking to atone for your past actions or the actions of your family?

Feature: Charitable Opportunities
In the different gate cities, the Bleak Cabal can be found helping with different causes across the planes. At any chapter of any gate city, a member of the Bleak Cabal can find a list of different causes that might need additional assistance. Helping with the cause affords you and any associates assisting with room, board, and access to any donated goods – such as those left in wills to the faction by those they are caring for.

Bleakers are individuals looking to aid those in need. This doesn’t mean they are gullible fools who are easily tricked – far from it – but it does mean they often give questionable souls the benefit of the doubt. Still, Bleakers are not bound by any code or oaths. They serve because they want to do so and belief that they should. If they no longer feel like their service is helpful or necessary, they simply stop their service. Most find the Bleakers to be a comforting presence in the planes, and accept their assistance.

If you possess the power and ability to take from others, you possess the right to do so. The multiverse belongs to those who seize control of it. Your fate rests not in the plan of supreme beings or a greater mystery of the unknown, but in your own hands. Nothing in life is free. If you fail, don’t blame your failures on others. It’s because you are too weak to succeed.

The Fated – known as the Heartless or the Takers – can be found in in their headquarters in the Hall of Records. The Fated do not work to ingratiate themselves to others, serving as Sigil’s tax collectors and debt recorders. That isn’t to say the Fated are unwilling to assist others – just that assistance is always meticulously recorded. You can be nothing if not certain this debt will require repayment.

As a Fated, what caused you to adopt the philosophy of the faction? Did someone fail you in the past in a time of need? Were your actions scorned by others, but you see them as the only reasonable course of action still to this day? What are your personal goals within the planes and Sigil?

Feature: The Ledger
You have access to the debt and tax records kept by the Fated in most gate towns and in Sigil. In exchange for a small fee or favor, you may look through these records to discern who owes outstanding debts or taxes, and for what reason. While not guaranteed, these ledger entries also possess marginalia regarding the nature of the individual in question, as well.

The Fated are tightly contained, and pride themselves on giving away nothing more than they feel is strictly necessary. Every action one of the Fated takes needs to answer the driving question “what can I gain from this?” That doesn’t mean that the Fated are cruel or evil. It simply means they put themselves first – always and forever. Sometimes, having someone like that on your team can be a huge benefit. Other times, it’s decidedly less of a benefit.