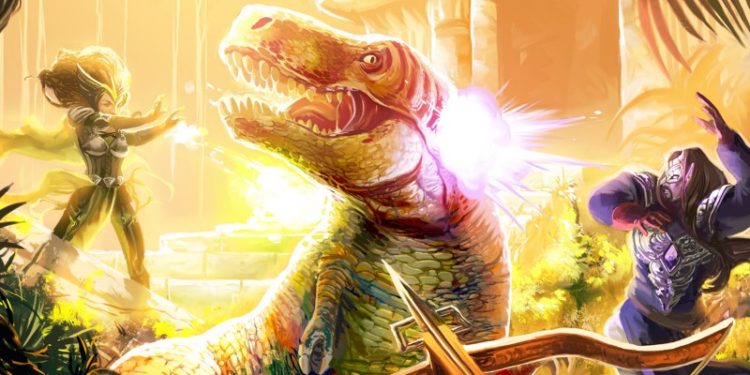 Encounters in the Savage Jungles is a hefty (80-page) PDF, released on the DM’s Guild as a supplement to Tomb of Annihilation (or any other jungle content) for $6.95. It’s a collection of 38 encounters (23 full-length, 15 quick hits, some bonus maps toward the end), which is a lot more than I’m going to cover in depth. Instead, I’m covering the first 8 encounters with a paragraph or two. This book explicitly requires both ToA and Volo’s Guide to Monsters to use.

Dam Kobolds! Is a fairly short dungeon crawl full of kobolds and other stuff, somewhat buffed up by the mechanical implications of an item found in ToA. It’s targeted at CR 6, and emphasizes cover mechanics – so whether or not you like this correlates closely to how you feel about Tucker’s Kobolds. It doesn’t go to the guerrilla-commando extremes of classic Tucker’s Kobolds, though. The text doesn’t propose reasons that the PCs might need to carve their way through kobolds, but if you can handle that on your own, this is a good foundation for a few evenings of play.

Some players may feel a little weird about still fighting kobolds all the way to this adventure’s CR 6, in spite of 5e’s small-opponents-still-matter style. Think about how you’re going to establish stakes and threat in the narrative, because you probably don’t want your players to feel like chumps for being challenged. Also, don’t miss the writer’s blog post that talks about how to weave more of the document’s content into this adventure.

The Butcher is a classic horror setup: seemingly friendly hosts turn out to want to have you over for dinner. It’s only a small number of encounters, probably one session of play or less. This can either be a straightforward investigation and beat-‘em-up, or it can be a tense, dark horror sequence, depending on whether the DM groks the slow build of tension and reveals.

There’s an implicit broad comedy in the first presentation of the gnome and goblin married couple. I’m not super happy that they turn out to be despicable, and probably get stabbed to death by the PCs. The scenario goes from implying that these goblins could be fine, kind of guilting the PCs into treating them as people, only to reverse itself and present them as always having been monsters. I deeply reject “your compassion was just you being stupid,” especially with it’s about crediting the NPCs as being worth talking to when the D&D stereotypical response was situationally correct.

Stairs to Nowhere is a general-purpose adventure hook: you meet a cloaked stranger (incidentally a tortle in the middle of the jungle, rather than an old man in a tavern), and he offers you information about places worth looting. The dungeon suggested in the title is not detailed here. Instead, there are some general suggestions of what might be on the other end. Especially if you need a mouthpiece of exposition or a way for PCs to find a particular destination, Baka Trailshell is your dude. Make sure you develop Baka into someone you enjoy playing and your players enjoy talking to, because he can be the hook for countless adventures.

The Idol of the Three-Headed God is a treasure that spawns monsters who try to kill the PCs, on each of three consecutive nights. There’s a table for adapting this to PCs of anywhere from 1st to 10th level. And… that’s basically it. There’s no suggestion of the backstory here. If there’s a canonical three-headed Chultan god, I don’t know about it. (Let’s be real, keeping track of the most obscure Faerunian regional deities is beyond my considerable powers.) This could have used a lot more development to be anything more than a repetitive beat-‘em-up. If you plan to use this content, be prepared to do most of the work yourself.

The Lost Treasure-Hunter is a random encounter that can unfold into a minor side-quest. Other than taking place in a jungle, this is the most Skyrim thing I have yet seen. That’s not a bad thing. My only issue here is that a lot of the conflict and interest requires the PCs to get infected by a mushroom’s spores, but the text misses a chance to make the Medicine skill be worth a damn, and deliberately prices the cure for the spores outside of the PCs’ expected reach (5th-level heroes don’t have a lot of greater restoration to go around). Otherwise, it’s good hexcrawl content, and probably keeps 1-2 of your players entertained long after the initial encounter is over.

Asad the Merchant is an NPC the PCs could encounter once or many times. The section also includes a bunch of new equipment – some of it is great and ToA isn’t complete without it, like the macuahuitl. Other pieces are not so great, like the new armors – but then it’s incredibly hard to create new medium or heavy armors that have a viable niche (and it’s hard for medium armor to be viable at all). As with Baka Trailshell, work on making Asad someone you love to play, and the PCs will keep coming back to him for the pleasure of his company and his honest dealing.

The Nest is a physical exploration challenge, largely obviated if any characters can fly or have a climbing speed, with a combat along the way. The reward is a chance for a pterodactyl pet; I assume there is no gamer so lost as to not want one of those. If ToA were a video game, this would be the kind of random encounter you’d keep exploring until you triggered, even if you had immensely out-leveled it, and that means it’s a great addition.

Enter the Ouroboros is an animate dungeon that swallows up the PCs. It includes scaling for CRs 11-17, which suggests that it’s hexcrawl content for after you’ve beaten the main story of Tomb of Annihilation. The encounters inside the Ouroboros are much lower-level; the animate dungeon provides a steady kind of meta-threat. That said, I am hard-pressed to believe that this adds up to a CR 17 challenge. I suspect that the best-case scenario, in terms of threat, is half the party inside and half the party still fighting outside.

If you’re interested in running ToA as a long-term hexcrawl, with a lot of short-story content that expands the world without touching on the main story, this is a fine purchase; its $6.95 price point is eminently reasonable for its length. It presents a wide variety of challenge ratings, encounter types, and tones. Personally, I don’t really go for joke names and silly NPCs, so I would either go heavy on rewriting or be very picky about which encounters I used. Characters whose names are common words spelled backward, for example, have a long history in D&D, but leave me cold. Also, poop jokes aren’t really the D&D that I want to run or play, because I hate fun. (It’s true – just ask my players.)

For me, then, this product gets 3 stars in 5, but I think most users would find that it tacks on half a star to one full star.

Overall8
8Overall Score
If you’re interested in running ToA as a long-term hexcrawl, with a lot of short-story content that expands the world without touching on the main story, this is a fine purchase; its $6.95 price point is eminently reasonable for its length. It presents a wide variety of challenge ratings, encounter types, and tones.
Tagsadventureadventure seedsD&D 5eDM's GuildGuild Adept Programhexcrawljungletomb-of-annihilationVolo's Guide to Monsters
Previous Article