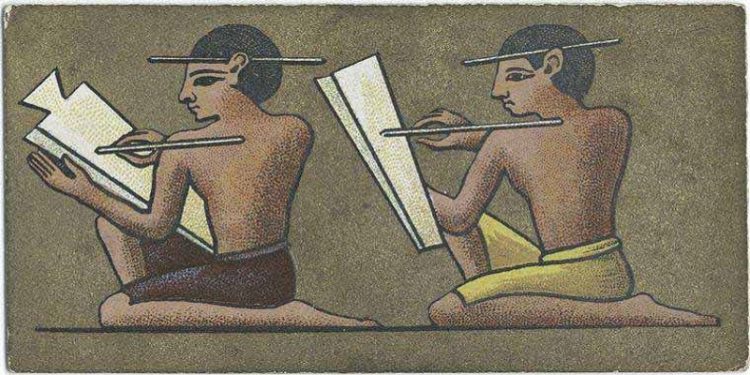 Once upon a time, I thought spellbooks were a needlessly fiddly section of gameplay that didn’t do a whole lot for the story. To my then underdeveloped sense of storytelling, spellbooks were fine as wizard treasure, but the fact they contained spells as-listed in the rulebook limited their mystique. Wizard spell books could only contain so many spells, after all. Finding new books with higher-level spells was part of the gameplay loop. As editions advanced, spellbooks began to carry more than just traditional spells in them. Newer spellbooks contain rituals, glyphs codes, or even epic-level spells that summon hordes of red dragons. Some are even magic items in their own right. However, the only lore around them seems to be “belonging to Arch-Wizard Toby Naym D’later,” or “we must not read from the book!” I used to think this way, until I experienced better living through scrivenery.

Creating over 500 pages of spellbook content changes a man. Okay, so 500 might not be accurate. It’s probably a lot higher than that. I’m just not going to go count them all up. These 500 pages account for complete magic systems, magical board games, mundane crafting systems, magical crafting systems, and even magical legal documents. This is to say nothing of the copious amount of writing occurring for traditional text props – letters, diaries, and so on. Dust to Dust – a live action role-playing game created by local celebrity Brandes Stoddard – had magical academia as a focal point for the game. To support this theme, we follow a single guiding rule: spells – including recipes, formulas, patterns, etc – should be interesting for everyone, not just wizards.

If Jan Johansson, Champion of the Forbidden Pillar comes across a spell as treasure, Jan shouldn’t be disappointed. Instead, Jan should be able to learn something from the spell prop, and then be able to treat the spell as a trade commodity based on what the spell does. We achieve this by ensuring each spell has tangible lore components associated with it, and by developing a complementary research system. With this in mind, every spell has the following structure:

Let’s take the iconic spell fireball and build a spell prop for it. This spell is a cornerstone of D&D, and is a staple of sorcerers and wizards everywhere. In fact, the ubiquitousness of the spell makes it the perfect example.

Fireball is a perfectly serviceable name for the spell – it is, after all, a ball of fire. However, it doesn’t give us much in the way of setting lore or context clues. Changing the name to adhere to D&D’s spell-naming conventions moves us a step in the right direction. Instead of fireball, we will call it lugh’s fiery spear. Already this tells us a bit more about the lore of the world than plain ol’ fireball. It also speaks to why spells get re-named from things like melf’s acid arrow to just acid arrow as part of the OGL. Melf is a grey elf wizard from Greyhawk, and the attachment of his name to the spell tells you a lot about it, as a result. In this case, renaming fireball to lugh’s fiery spear tells us the Celtic god Lugh is somehow involved in the spell, and that Areadbhar – his spear that bursts into flame – exists in this world, or perhaps was this spell instead of the spear.

Lore vignettes are slightly more complicated than a spell’s name, and can vary in length. Most vignettes are in the one to two paragraph range, but some are five pages of poetry. In general, a single vignette is going to be associated with a spell, but different versions of the spell might have different vignettes. Vignettes should relate to the spell in some fashion, but the relationship need not be direct. In the case of lugh’s fiery spear, the vignette could tell a story of Lugh, Balor – the Fomorian King and Lugh’s grandfather, Areadbhar, Cú Chulainn – Lugh’s son, or even a battle where the spell was often used or the wizard who used it frequently. In this case, let’s use a battle and a participant in the battle, as we have naught defined of the setting we are seeking to expand.

“Smoke hung thick over the quiet battlefield. Those tending to the wounded shifting into amorphous blobs feeding upon the casualties of battle. The seemingly sourceless chanting of the Children of Goibniu drift through the gloaming, punctuated by the ringing of their portable forges as they see to the armaments of the remaining soldiers. Even from our vantage point across the Grave of Buarainech, it is easy to discern the swollen and blistered ground around Ethniu’s Tower. These perfect circles of blackened grass and charred bodies dot the battlefield, telling the gruesome tale of the Circle of Lugh hurling lugh’s fiery spear against the fomorians to great success. Areadbhar – the incantation’s namesake – rent the walls surrounding the tower asunder to start the day, causing the fomorians to meet us on the field of battle rather than allowing the siege to continue. Lugh’s direct involvement almost certainly means we will see Balor before the fate of the tower and surrounding town is decided. Balor already suffered humiliation by these same actors in this same location once before. Rest assured his pride will not allow him to revisit that defeat again.”

–from the journal of Minstrel Dubheasa; on display at Isleen Bardic College in Niamh

The above is indicative of the average vignette attached to a spell. It’s roughly a paragraph in length and provides a plethora of contextual setting information. Let’s break it apart to see what we learn.

Second, we introduce a handful of locations within the world. We learn Ethniu’s Tower is in the midst of a walled town, and that it is across an expanse of land called the Grave of Buarainech. Both locations have the names of people associated with them. This provides the information that these individual were once of great importance. Players could follow up on this information to learn more from a historical perspective of the places, events that occurred at these locations, or the people the locations were named after. Even the source of the vignette tells us of the location and name of a bardic college – also implying this and other, similar text would be available for viewing, should the players travel to the college to seek it out.

Finally, we also learn about several figures associated with this spell. The text of the vignette is written in-world by Minstrel Dubheasa, presumably a bard with Isleen Bardic College. The vignette also mentions both Lugh and Balor by name. This implies these two mythical figures were manifest during this time period. Likewise the existence of Areadbhar – Lugh’s powerful, flaming spear and stated inspiration for the spell – is confirmed. On a more mundane level, we also learn about two organizations. The Circle of Lugh are magic-user capable of casting lugh’s fiery spear – implying they are either arcane magic users or have access to the spell through other means. We also learn of the Children of Goibniu, a collective of magical smiths.

Symbols of Our Times

Associating a symbol with the spell is a trivial matter. We could choose something relating to the author, the bardic college, the spell, the Children of Lugh, or the divine symbols associated with Lugh and Balor. Like with all good information presentation, the key is consistency. Once you choose the symbol, ensuring it pops up appropriately is crucial to world building and the overarching lore game. In this case, I like the idea of creating a symbol for the bardic college and using it here. It lets us establish an academia center, and can then visually direct information location for the rest of the game. Players will find different symbols on different spells – particularly ones with similar attributes. This allows the players to identify and discover competing bardic colleges. Immediately having context for them in the game world is a great benefit. You do not find Illusion spells at Isleen College, but do at Macha College, for example.

Lastly, including rules text on the prop allows players to treat the prop as an in-play document. Players remain in-play without requiring any break in immersion to reference how the spell works on a rules level. It also allows you to easily compare the rules for two versions of a spell. The wizard simply opens the spell book up, and casts the spell directly. I always include the spell level and classes able to use the spells as part of the rules text. No fuss, no muss.

Taking it All in

As you can see, you gain quite a lot of information from reading through the vignette associated with this spell. Even if you can’t cast the spell itself, you gain something. The spell text provides information and reference to anyone who wants to invest the time in reading it. Anytime you mention the people, places, or events throughout the rest of the campaign, the players are able to act with more authority and expertise. Perhaps most importantly, it allows the players to direct the use and investigation of the knowledge.

This might appear to be a lot of work for just wizards – or wizard hybrids – and you aren’t wrong. However, I create these spell props for all magic-users. As long as a player possesses the spell – and meet the requirements – the spell counts as a bonus spell. This allows them to cast it as if it were a known spell. Additionally, I introduce any spell I homebrew in this fashion. Ensuring the spell meshes well with the theme of the game is important to me. Creating a prop for it allows players to instantly associate it to the existing game world.

Before I conclude, I want to mention one other reason spell props are amazing for games – marginalia. How cool is it to find an antagonistic wizard’s spell book with her personal notes on each spell as part of the prop? Players receive a look at how others view the magic of the world. Not to mention reading the thought process of one of their foes. Maybe it is just me, but I find it incredibly fascinating.