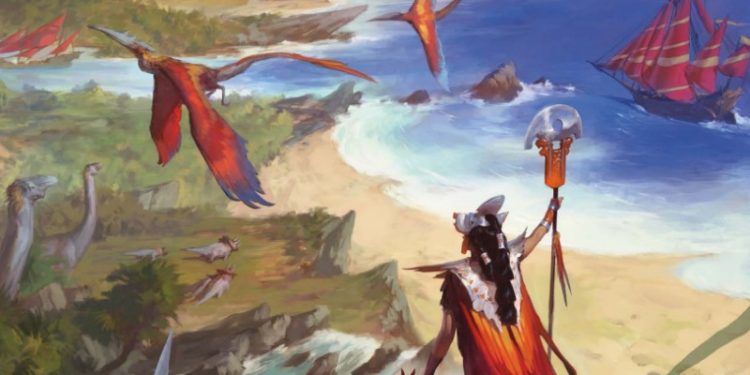 Last week, just as January’s Unearthed Arcana dropped, we also got a new Plane Shift from James Wyatt titled Plane Shift: Ixalan. Now, I come in knowing precisely nothing about Ixalan, beyond guessing that I might get something Mesoamerican. The opening text talks about some dungeon-crawling action, so that’s promising. As usual, though, I’m not really here to critique the setting design, but to talk about how the mechanics support and inform the intended story.

The setting looks like a Mesoamerica-influenced dungeon-crawling setting, which is a combination you don’t see every day. I like exploration and treasure in basically any context, so we’re off to a great start. There are four major cultures, apparently in regular conflict: the Sun Empire, the River Heralds, the Legion of Dusk, and the Brazen Coalition. I appreciate that the text recognizes the issues around characters from warring cultures, and dedicates an extensive sidebar to potential solutions. The layout there is a little strange, but whatever.

Each culture gets its own favored race(s), backgrounds, and classes, with no mechanical impact attached, as is probably preferable. They further get their own tables of Ideals and Bonds, which looks like a great way to communicate group identity and shared experience. The Sun Empire seems to offer a lot more breadth of character classes, while the Legion of Dusk has its own variant Oath Tenets for paladins – who are advised to use either Devotion or Conquest for their mechanics. Vampire paladins of Conquest, pale-skinned and in stylized conquistador armor? Little on the nose, but also awesome. I mean, they are loathsome villains, because conquistadors; I can’t really recommend this for PC use. The Legion of Dusk’s cultural ideals are super evil. I would suggest that the most obvious of campaign models is “everyone, including rebel legionnaires, against the Legion.”

Plane Shift offers an impressive six races, though humans are exactly what you’d expect. I am anxious for some setting, even an abbreviated one, to do something different with humans!

Merfolk are the only significantly-represented race of the River Heralds, and come in two subraces: green and blue. The theme is mostly what you’d expect. The core racial features:

That is one thin racial core, but it covers the most necessary parts of expressing a race as merfolk. I’d like to see one more trait added in there, something more active-use.

Unless you can get good use of your Amphibious and swimming speed features a lot of the time, this is pretty underwhelming. It’s an elf, but less in most regards. The elf is well-designed to work with parties of other races; the green merfolk are great at going places no one else in the party can go, which can go very well or very poorly.

Blue merfolk are the more elegant and river-dwelling subrace, pretty much as you’d expect of M:tG’s color wheel.

Well, these are vaguely like high elves, I guess? The shortcomings of the high elf mechanics are such that blue merfolk are pretty competitive with them, but they’re otherwise low-balling power balance all over the place here.

Vampires cover a good range of the traditional vampire strengths, but like most player races that aren’t drow, have no serious drawbacks. Maybe that’s as intended for Ixalan vamps? Should there be a bit more in the way of blood dependence? Anyway, no subraces here.

I like the function of Bloodthirst and Feast of Blood, and overall I like this presentation, though I think it falls short of fitting vampires for most settings. It’s clear from the art that Ixalan vampires have no problem with the sun, though, and likely no problem with fire or radiant damage. Other than the fact that I would really not play conquistadors in a Mesoamerica-based setting as a player character, this is fine. Adding in one more minor feature wouldn’t break it, though.

Orcs don’t have a lot new to say on flavor (except that orcs have been nearly exterminated by the Legion of Dusk), and nothing new to say on mechanics (they’re a find-and-replace of half-orc mechanics). That’s fine. Little surprised the document didn’t use VGTM orcs, but this is fine.

Goblins are nigh-on-kender-like, hyperactive, and small. Most of them are pirates, because the Brazen Coalition is the group that will take them in.

Um. This reads like someone forgot to write about half of it. Unless your campaign is mostly about climbing, this is deeply underpowered right down the line. (There’s a sidebar about goblins from other planes that makes it extra clear that this is all they’re supposed to have.)

Sirens are birdlike humanoids whose capriciousness, as described, would make them incredibly unpleasant to play with at the table. Sudden mood reversals without any impetus are, um, mental illness and not fun to be around? Please use this responsibly (by not doing it).

And that’s sirens. These six races are okay together – that is, when they’re basically the only options the DM puts on the table – but merfolk, goblins, and sirens don’t really hold up when used alongside other published races.

There are a few pages of additional art object tables and Who Created It? tables for use in Ixalan. There aren’t any mechanics here to speak of, but I’m pretty much always a fan of this kind of content (even if I almost never use it in planning my own sessions). These are good reminders of how to present setting flavor in everything the players interact with.

This is a bestiary of big, colorful, stompy monsters and if that isn’t the right way to start your day, I don’t know how to help you. Just about every dinosaur stat block belongs in Ixalan to represent one or more types of dinosaur, and as the father of a three-year-old, I am here to tell you that this is the greatest design decision ever made by a human. Ever. Dinosaurs, man, they’re the best.

I like how deep this text goes on guidance for appropriate monster types and presenting the rainforests as teeming with life.

Appendix: The Colors of Magic

If you’re going to run a Magic: the Dungeoning and Also Dragoning campaign, you should really be thinking about the M:tG color wheel a lot of the time, especially as an aspect of character concepts. This document includes seven pages of guidance and pontification on how to do that. Each color has an alignment, power suite, suggested races, classes, and backgrounds, and tables of personality traits and ideals. There’s also some guidance on color-blending – that is, how does the personality of White splashed with Blue come across?

Overall, I like the setting and ideas that Plane Shift: Ixalan brings to the table. Several of its races are a mess and really need more to be acceptable options. The brief section on treasure is nice to have, and the new monster stat blocks have a good balance of use-it-today and seeds of a whole story arc. You could use this document with only minimal changes to run a variant Maztica, but I think the best game here is still everyone against the Legion. I mean, legions of vampires with no fear of the sun? Yeah, that’s a bad problem, in a fun way.

Aberrations, Druids, and the Circle of the ...