Dendar the Night Serpent and Path of Nightmares Barbarians 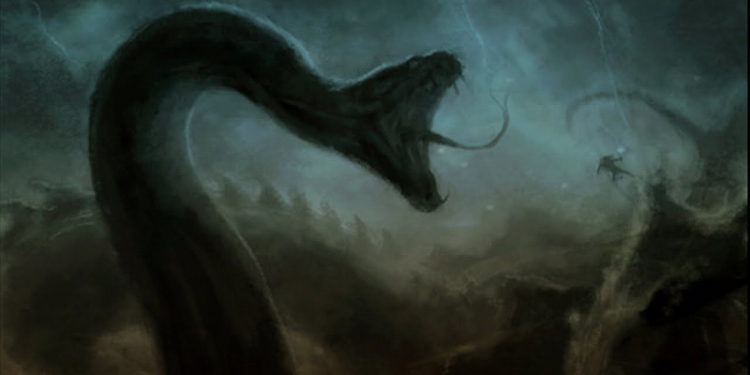 Barbarians are a weird class. They are like the next door neighbors of fighters. Sometimes – like when the Brute archetype makes the rounds – they might even be college roommates. Barbarians are interesting in the fact they require settings to make specifics allotments for them more than any other class than perhaps monks. Still, this means barbarians have a lot to gain when fully integrated into a setting. With that in mind, I am continuing to explore the Far Realm and a world where the Zodiac opposes them. Let’s dive into a look at Dendar the Night Serpent and Path of Nightmares Barbarians.

Previous Discussions: The Zodiac and the Celestial Sorcerer | Aberrations and the Circle of the Zodiac Druids

A Brief Lesson on Dendar

Whether it’s Jörmungandr, Níðhöggr, Apep, or Dendar the Night Serpent, everyone enjoys tales of giant serpents wrecking stuff. While all of these serpents have appeared in D&D games, I want to focus on Dendar the Night Serpent. Ol’ Dendy gets a mention in the Player’s Handbook as an example of a Great Old One patron for warlocks. Dendar is classified as both an elder evil and a primordial. Elder evil is a catch-all term to describe beings of immense power that aren’t gods. Former Lords of Hell, creatures from between planes, undead planets, alien beings from the Far Realm, and your run-of-the-mill discount Mythos Elder God are all classified as elder evils. Primordials are more specific, in that they are beings of elemental energy and entropy from the dawn of time. Of course, neither necessarily makes Dendar an entity of the Far Realm. In fact, according to her written lore, she’s not.

Dendar the Night Serpent has a sweet bachelor pad in the Fugue Plane – where she spends most her time despite having the sick ability to slither across the planes as she so pleases. As we all know, the Fugue Plane hangs out in the Astral Sea, and is the plane where the souls of mortals head after they die – if you are Abeir-Torillean, at least. Abeir-Torilese? I’ve heard it both ways. Anyway, Dendar the Dendarian gets a bad wrap. Sure, Dendar the Night Serpent is a harbinger of the end of the world – including the gods themselves – but does that mean Dendar is evil? Let’s look closer.

Not So Mrs. Mean Lady

Dendar eats the nightmares of any dreaming creature. When she eats these nightmares, it means mortals experience them less fully. While it is creepy that she enjoys nightmares – the more horrific, the more delicious – some people put ketchup on steak. Does it give us goosebumps and make us shiver down to our core? Certainly. It doesn’t, however, make her or those other people evil. Even if you believe her insatiable hunger for nightmares is a problem, isn’t fewer nightmares a good thing? Okay, so her appearance – a body covered in black scales comprised of nightmares made tangible, with fangs that drip with lost dreams – is scary, we shouldn’t judge someone on their looks. Another mark in her column is that she was proven innocent of having any dealings with the Night Parade – a group of poorly-named Netherese wizards that mucked about in the Plane of Nightmares and became magical terrorists. In short, she’s a harbinger for the end times, but she’s otherwise a pretty alright gal.

Dendar the Night Serpent being a constellation fits right in without too much effort at all, and would naturally oppose the intrusion of the Far Realm. While Dendar could eat the nightmares of the mortals and other Zodiac signs, the alien nature of the Far Realm might prove problematic and outside of her considerable skills. Dendar might terrify mortals, but there isn’t any question that she protects them from the absolute worst that they might face. After all, she eats their nightmares to make them less terrifying to experience.

Dendar the Night Serpent and Path of Nightmare Barbarians

Let’s move away from Ol’ Dendy for a moment and discuss barbarians. As presented in the Player’s Handbook, barbarians are tribal warriors who distrust the trappings of civilization. Barbarians tend to venerate both nature and their ancestors, blending a sort of animism with their martial prowess. They are also wild warriors – falling into battle rages to unleash their interpretation of their primal self. This provides a setting not only with tribal people, but tribal people who have specific belief structures in order to support a specific class. While other classes certainly inform settings, none are quite as clear as the barbarian – though monk is a close second, for similar reasons.

So how would barbarians fit in this world of the Zodiac? Easy, they are nomads who serve Dendar the Night Serpent. They wander in small groups as they find prolonged exposure to the dreams of the amount of people one might find in a town or village to be taxing. Civilized people might seek them out for assistance if they have been experiencing potent nightmares, but mistrust them for their service to one who signals the end of the world. The rage these barbarians experience comes from drawing upon the nightmares they have taken from others, and controlling their expression.

The Path of Nightmares is walked in dreams and the waking world in equal measure. It is the path of Dendar the Night Serpent, and viewed by others as a sign of the end-times. Until that comes to pass, you do as you have been taught – ease the burden of mortals and punish those who would interfere. You travel the land, seeking out those who are unable to withstand what they see in their sleep, and you ease their burden. In battle, you turn these nightmares you have spared others from and unleash them upon your foes.

Starting when you choose this path at 3rd level, when you complete a long rest, you have a pool of nightmare energy represented by a number of d6equal to your Constitution modifier (minimum of 1). You may choose to suffer 1d6 psychic damage to gain one additional die. You may do this once for each die you are granted normally. For each die you gain, one sentient being sleeping while you completed your long rest experiences a less intense nightmare.

While raging, you may expend a nightmare energy die in the following ways:

You regain spent nightmare energy die equal to your Constitution modifier when you complete a short rest.

Further, while raging you have resistance to cold and psychic damage.

Beginning at 6th-level, you have gained a portion of mastery over your sleep. Magic can no longer put you to sleep. Further, as a reaction to someone attempting to put you to sleep with magic, you gain temporary hit points equal to your barbarian level.

If you are raging, you suffer no damage when you extend this immunity to others.

Upon reaching 10th level, your exposure to nightmares leaves you less shaken by creatures and occurrences that might terrify others. You have advantage against being frightened.

Additionally, when an ally you can see within 30 feet would be frightened, you can spend your reaction to suffer 2d6 psychic damage to extend this advantage to your ally.

If you are raging, you cannot be frightened, and you suffer no damage when you extend advantage to others.

Starting at 14th level, you have learned to unleash the full potential of the nightmares you consume. When you begin to rage, you can temporary hit points equal to your barbarian level. You may expend nightmare energy die to roll the die and add the result to the amount of temporary hit points you gain.

While raging, horrific images swirl around you in a 5-foot radius. When a creature enters the area for the first time on a turn or starts its turn there, it suffers psychic damage equal to your Constitution modifier (minimum of 1). When you begin raging, you may choose any number of creatures you can see to be unaffected by this damage.

Further, as long as you have temporary hit point granted by this feature, whenever a creature hits you with a weapon attack, it must succeed on a Wisdom saving throw where the DC is equal to 8 + Your Proficiency Bonus + Your Constitution Modifier or become frightened of you until you no longer possess these temporary hit points.