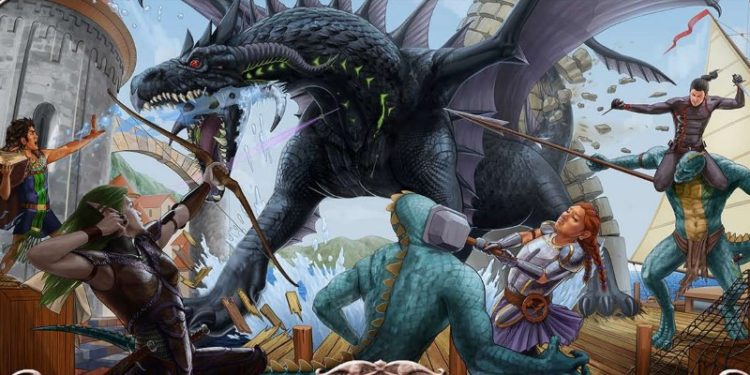 Part of developing the market around third-party 5e products is broadening the review base, so that potential buyers have something to go on. With that long-term self-interest at heart, then, I’m reviewing Deadly Delves: Reign of Ruin, written by Richard Moore and released by Jon Brazer Enterprises. Since I always approve of alliteration, I literally and liberally lament its lack later on, but the title is tres magnifique.

This is a 42-page adventure that presents a single dungeon crawl, intended for a party of 7th-level PCs (who will likely advance to 8th, and possibly 9th, in its course). It’s adapted from its initial Pathfinder release. I don’t know a whole lot about what’s out there for third-party adventures; it’s tough to get a clear picture of the demon-haunted wilderness of the OGL outside the DM’s Guild. I have the strong impression that the great majority of adventures are written for 1st level, with only a handful starting above 5th level. There are some good reasons for this, but at the same time, one does like to see robust support for every level of play.

I’m going to be talking about the adventure in some detail, so… if spoilers are a concern for you, bookmark this article and come back someday? I’ll miss you.

The adventure is long on background. Three partial pages of two-column text is a lot to absorb, and a lot of its effect is to make it seem harder to drop this adventure into another setting. The background doesn’t wind up making that big of a difference in the flow of the adventure, though. It’s set dressing for the adventure hook and one expository encounter. Everything else amounts to finding your own best path to a dungeon in a swamp with a big dragon in it. The two feuding lizardfolk tribes are important to the whole adventure, but you can downplay their lore considerably.

The cultural notes that go into this get a little unusual. The human culture that is the wronged and oppressed party – the one-time owners of the holy site in the swamp – is somewhat Irish-themed, giving some impression that we’re talking about peat bogs. The lizardfolk tribe and deity names are Aztec-inspired, and geographically overlapping. God bless the fantasy of zero linguistic exchange. Anyway.

The salient villainous motivation is a black dragon trying to live up to her dead mother’s glory. This may not earn a lot of sympathy from the PCs (said mother is described in the background as a legendarily tyrannical dragon), but it’s clear and easy to understand. The villain’s way of doing this is performing a massive blood ritual to become a favored servant of an evil god. All things considered, that again looks straightforward and reasonable. At worst, maybe a little too transactional, but that’s not really a fair criticism – I wouldn’t thank the module for delving too deep into an irrelevant set of occult mysteries.

There are a lot of encounters here that are likely – all but guaranteed – to lead to combat. The module presents this as intentional, suggesting that this adventure is ideal for parties seeking a serious tactical challenge. I’ve counted up the encounters, with a tally of their default approach (and with a particular note for consecutive encounters in a given style). There’s a bit of judgment call on what’s a discrete encounter and what the expected resolution is in some cases, but still.

I think the main thing to take away from this kind of data is that the DM and players may need to do some heavy lifting, if interludes of party interaction and personal drama are part of your expected playstyle. The combat encounters are reasonably varied; some creatures show up a lot, but there are also terrain hazards (mostly “the floor is acid!”) to spice things up. If you have a narrative-focused group, you’ll need to do a lot of extra work to give each encounter a sense of stakes and tension.

Probably my greatest concern about the module is that the main villain shows up repeatedly, has a couple of general escape plans (flight, swimming, and polymorphing – none of them foolproof), and only 210 hit points. By 7th or 8th level, I think there’s a good chance the PCs can take her from “in the fight and feeling okay” to stone dead in a single round of actions, even with her legendary actions interrupting them. There are also enough battlefield-control spells, features, and feats (Sentinel, I’m looking at you) that she could get locked down and murdered early. It is, at least, something to look out for in running this adventure.

My favorite thing about the adventure is that there’s a ruined fountain the PCs can purify, using materials found elsewhere in the dungeon, to gain useful benefits and create a somewhat safer area. I think that most published dungeons would benefit from giving PCs ways to alter them and interact directly with the architecture and décor – something I’ve written about before.

Nyrionaxys II (the main villain) casts a broad shadow, and the PCs have a lot of chances to learn things about her and develop attachment to hating her even when she isn’t directly on-camera. Her mother’s indiscriminate interbreeding created a whole lot of creatures here with the half-dragon template. As a result, the whole adventure environment displays that black draconic presence, like a kind of gravity.

There are a good selection of new monsters and magic items, most of which are worth lifting for use elsewhere. The rainbow scepter is a particular standout for me. On the other hand, the relic of unholy devotion grants ability score bonuses to conjured creatures, and that’s a model we’ve largely ended in 5e, for good reason.

Even if you’re not running this adventure in any direct sense, you could use its encounters as a random encounter table for a whole lot of swamp-based adventuring.

(There are no major flaws to note. This adventure gets from A to B to C cleanly, and it gets to the fucking monkey: Nyrionaxys II shows her face in the first fight.)

I’m not wild about the 3.x/Pathfinder-inspired choice to tack on character levels. That’s… a way to build monsters in 5e, just not one that I like. A fighter’s Second Wind feature doesn’t mean much to a dragon, after all, so that feature is mostly wasted space in what’s already a big stat block.

The editing suffers in a few places. It doesn’t rise to the level of damaging the text, but it’s there.

I have read some enormously overheated criticism of the module’s use of boxed text. It’s there, it shows up on the regular, and this is still an industry standard. If you’re running published adventures, you’ve learned to make boxed text work for you, or you really need to. You could learn to read from a page while putting the emPHAsis on the right sylLable, or you could read what’s written and rephrase it in your own words (like writing an essay in school!). My point is, the boxed text is normal and I appreciated the descriptions of new monsters.

The adventure could have benefited from more time-related tension, rather than the PCs picking their own pace of progress through its perils. There is only about one clearly good place to take a long rest, but not enough of a reason not to retreat and re-enter repeatedly. Nyrionaxys II doesn’t have a clear way to push her own agenda or react to the PCs, beyond personal engagement against them. When it comes to setting stakes, you really want an adventure or campaign to pose a number of different things that can go the way the PCs/audience hope and the way they fear. All we really have in Reign of Ruin is “PCs die or PCs continue onward.”

Overall, I like what I see here, and if I were looking for swamp content, especially anywhere in the broader bracket of… let’s say 5th to 13th level, I’d consider this a go-to source. The critiques that I have to offer are so nearly universal among published adventures that it’s nearly disingenuous to hold them against the work. I’d call it 4.5 stars out of 5, rounded comfortably up to 5; on a 10-point scale, a strong 9. Its $10 price point on DriveThruRPG sounds quite reasonable.

If you’re running Hoard of the Dragon Queen and you just can’t make yourself love Episode 6: Castle Naerytar, you could probably slot this in its place. To be super blunt, Episodes 6-8 of HotDQ accomplish so little of lasting use to the Tyranny of Dragons narrative that you could tweak the scaling on this and slot it in, putting your PCs through a brutal dungeon crawl. In such a context, the adventure would prefigure Severin’s similar ritual to conjure Tiamat, possibly teach PCs something about the ritual before it’s actually being performed, and provide a difficulty spike for which much of Rise of Tiamat would be a welcome respite. If Nyrionaxys II is attempting to win the favor of Tiamat in anticipation of her arrival, that shows Tiamat’s influence in how dragons are sucking up to her. Alternately, maybe Nyrionaxys II is trying to beat Severin to the punch. When Rezmir leads the PCs near her swamp, it is to turn them into her catspaw: they interfere and force Nyrionaxys II to obey the Cult’s wishes.

I received a free review copy through Tribality.

Presentation10
New Creatures9
New Magic Items9.5
Maps9.5
Narrative Clarity10
Editing8.5
9.4Overall Score
This adventure offers challenging combat, along with good traps and things to investigate. Its strongest point is its narrative clarity: what the villain is doing, why she is doing it, and how the PCs can affect the outcome. It is also a great source of content to re-use in adventures of your own creation.
Tagsadventuredragonsdungeondungeon-crawllizardfolkmodulemonstersreviews
Previous Article

Dendar the Night Serpent and Path of ...