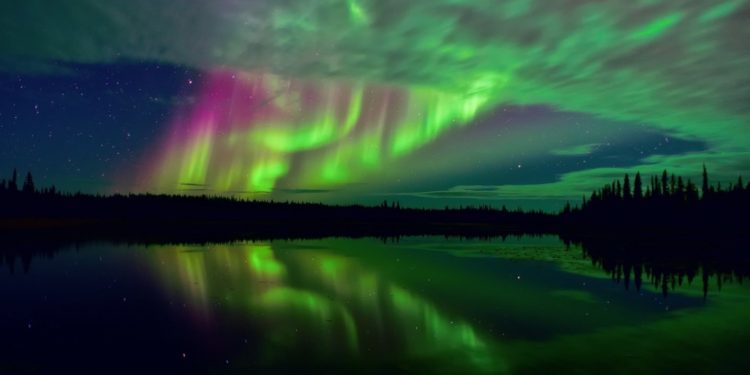 Ley lines appear as auroras of shimmering energy waving just above or below the ground. Ley lines are where dreams and hopes and fears from peoples minds and the astral plane intersect and flow throughout the world.

Where they appear in the natural world may be marked by strange rock formations, unusual smelling plants or sound distortions in open air.

Here are some ideas to use these in your campaigns…

1 – Ley lines can be a way to enter the dream world or the astral plane. This also means creatures there can come out. Perhaps around these areas you can create, modify or destroy items for a limited time by force of will. These areas will be hotly contested after once discovered. Githyanki or Species 8472 (ST Voyager) could be in the area, unleashing havoc.

2 – They renew magic or mana, recharging charged items or spell slots of spell casters. This could be limited to 24 spell slots/charges per day, or just be painful and the cost is it ages you or drains hit points.

3 – Warps creatures motivations and physical form. This can be like the Chaos Scar series from 3.5 D&D or Warpstone from Warhammer Fantasy. The more exposure to the Ley line the more it changes the outlook and features of the ‘enhanced’.

Those effected long term may form a cult around this new chosen path they have discovered, or go around sneaking essence of ley line into peoples food or dreams at night.

4 – Ley lines could be travelled on, like a super highway for people with the right alloy or spell such as floating disc or mount. They would be restricted to where the ley lines are flowing, but they would travel there super quick.

5 – Fey could be attracted to the ley line, it being a portal between the worlds and like drinking water-essential to them. Some may consider it theirs and not want to share, others may want to spread the ley lines all over the world-linking the faerie realm and reality.

Near the area people could have strange dreams or be afflicted with insistent inspiration towards creative endeavours. Overcome with passion for music or art they stop regular activity and pursue their dreams.

6 – Maybe the Ley lines amplify magic, doubling the area of effect and range of any magic near them, but using the Ley lines drains the overall magic level of the world, but people don’t find out until they can’t do powerful spells any more or a magical citadel falls out of the sky.

7 – Genie consider Ley lines are neutral ground for trade and discussions of the other elder creatures (dragons, giants, elementals) activities. Some creatures may want to listen in on these chats, others may want to disrupt them.

The Genie may use the Ley lines to come to the regular world and teach mortals how to use the ley lines, this can be a great way to introduce a new range of mystic options or splat-book to your ongoing campaign.

8 – Perhaps the Ley lines act as anti magic shields. People hide themselves or their buildings their to avoid magical destruction or detection. The cost is they lose their dreams, and a cabal of wizards who set them up long ago will control your body while you think you are sleeping.

9 – Ley lines can be tapped for a ritual. Don’t think small scale, think big. Like shatter the astral plane and let the Titans/Aberrations/Tribbles/Primoridals invade the galaxy once again. This ritual would take time and require alot of concentration, and the visitors from beyond are unlikely to be friendly if they were locked out by the gods in the first place.