Welcome back to the world of STORM EDGE: THE ADVENTURES IN EIGHT ISLES! This week, we will be going over the lore and variations of each races in The Eight Isles. The world of The Eight Isles is significantly different from the regular Dungeons & Dragons setting. Each race has been impacted in different ways by the close contact of the land with other planes and has been impacted by the societies and the history of The Eight Isles. Below are brief notes on how they defer from their counterparts in other worlds.

(This article will be updated with the links to the races that have been significantly altered – such as Ryujin, Kijin and Henge – so please check back. If you want to know more on the history of this setting, see here (part1) and here (part2), and for it’s various locations and culture, here.) 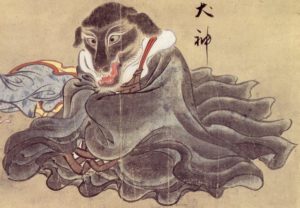 Aarakocras in The Eight Isles sometime have human faces and sometime bird faces. They live high in the mountains of Iya, guarding their monasteries (many are acolytes of The Lotus Wheel teachings). They are related to the raven-winged Tengu who revere the Horned Giants of the mountains. Some were granted the magic of Runes for their services and came to hold great powers. It is said that one such Tengu had trained the young Samurai prince Oniwaka of Seigen clan who later become one of the greatest swordsmen and strategists in The Eight Isles.

Most of the Imperial Family as well as Nobles that derive from the ancient lineage of Nigi-Midayus and his band of Devas, and those of Shogun family are Aasimars. This is because the emperor was one and the best way to secure one’s lineage is to marry into the Imperial family. Centuries of warfare have corrupted many Aasimars to become Scourage. One thing about the Angels and Aasimars in this world is that they do not have wings. Instead, they float in the air and have an aura of light draped around them like silken scarfs.

The dragons in this world, especially the Water Dragons that reside in waterfalls, ponds, and lakes have the tendency to demand a virgin offering from the local humans to be their wife (of course there are other ways around too). Thus, the Dragonborn, known as Ryujin, came to be and many made their homes in Hinami, close to water and their ancestors. There are eight types of Ryujin depending on their ancestry. They all have a jewel-like structure on their chest of a color corresponding to their ancestry. Instead of a breath-weapon, they possess innate magical abilities. They look more like humans than traditional Dragonborn do, with atypical eye and hair color, scales covering the majority of their bodies, (except for heads, fingers and toes), a tail with a bushy end, and a pair of little antlers instead of horns on the sides of their heads. Click here if you want to see more.

Dwarves in this world mostly keep to themselves up north in Oze except for trading metal works and silken vermillion   steels with those in Amato. Some of the Daimyo lords in the North have become sympathetic to their cause over the   years. Some Dwarves, along with Pallid Elves have developed druidic circle of metal and hope to bring spring to this   land. Some have gone deep beneath the mountain to become residents of the Underdark. Finally, some have adapted to  the snowfields to become Snow Dwarves.

Of all the races of The Eight Isles (not including humans), the Elves are probably closest to their counterparts in other worlds. They tend to keep their Elven first name (though some Half-Elves abandon them) and adopt a Human-sounding family name (as in the manner of The Eight Isles) that retains the original meaning. High-Elves in Ukushi’s great marshland had their own kingdom across The Eight Isles before the Orc invasions and many long to restore the days of their former glory. Wood Elves tend to keep to forests (in Ukushi and elsewhere) and communicate with Humans in a more friendly manner than their high-Elf counterparts, though they despise those that seek to invade their territories. Eladrin Elves are a rarity in this world and are often considered Little Fae Gods, especially by commoners. Drows in this world abandoned slavery and have largely adapted to the snowy environment of Oze to become Pallid Elves. Those that remain in the Underdark have built trade with Dwarves both under and above.

Drow Weapon Training: You have proficiency with Wakizashi, Scimitar, and Hand Crossbows

Elf Weapon Training: You have proficiency with Katana, Wakizashi, Longbow, and Short bow 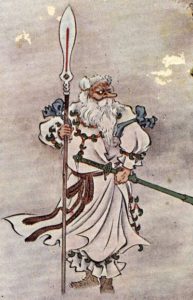 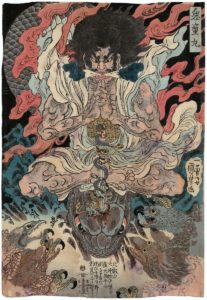 Firbolgs in The Eight Isles are descendants of Giants who elected not to engage in the long-ago battles with the Dragons. They hid in the Feywilde, becoming native there before coming out to The Eight Isles along with Elves and the Fey-Touched Halflings during the unification of The Eight Isles. They have little bumps on their heads that are remnants of their ancestral horns. Most of them stay in Ukushi, close to Elven communities. However, some do go out into the world, looking for their long-lost relatives that migrated up north to find different forests to tend to.

Goliath in The Eight Isles are called Kijin and are the descendants of the Great Horned Giants that mixed with Humans after The Great Harmony was made. As such, they have horns themselves, though not as many or of equal size as their ancestors, nor do they have extra limbs and heads like their ancestors often do. Most of Kijin are of Alabaster Giant heritage but there are also other kinds of Goliath (Carmine, Cobalt, Malachite and Obsidian). Goliaths despise the Oni, who they deem as the corruption of their ancestors. They are not as prevalent as Ryujin but many are known to live in high peaks and other extreme environments. Some even become samurai too.

As in other worlds, Gnomes are community-oriented tinkerers. Most of the Gnomes in Sago are Rock Gnomes and they are largely responsible for the development, improvement and spread of crossbows, firearms, and other technological marvels (such as Ikusa Kugutsu, living metal and wooden “War puppets”) in The Eight Isles. Forest Gnomes tend to be all over the Eight Isles with their main home in Sago.

Orcs and Half-Orcs have built a life and industry in Taiba and have mostly redeemed their savage reputation by being the stoic warriors and the best sea farers in The Eight Isles. Many of them have become Samurai of renown and hold a certain power in the central political dynamic of The Eight Isles. A lot of half orcs are deeply entrenched within The Eight Isles society since they were heavily involved in the union with humans after The Great Harmony was established. Of course, this distancing from their ancestral home has given birth to conflict between the Orcs who honor the old ways and the half-Orcs that blend in with the modern human society of this world. Many Orcs still teach the ways of The Dragon Slayer, a fierce fighting method focused on One-Hit Kill and charging atop their Sword-Beasts.

Tabaxi in this world are beautiful, sinuous people having mostly human features with cat ears, tails, claws, and whiskers. Their eyes are of unusual color and glow in dark. They mostly stay in Tashiro Island off the north eastern Amato city of Sengai, though some curiosity-stricken younglings go out into the wider world, wandering about the cities. Like the many residents of the North, Tabaxi are beast touched but it is a mystery why they retained so many human features and have no shape shifting powers. It is said they are related to the “Moon-Rabbit” folk that live in Okino island off the western end of Amato.

Tieflings of this world do not look that different from those in other worlds. They have developed their own community in The Eight Isles and have integrated themselves as an important and powerful element of noble society.  Unlike their brethren in the West, the Tieflings of The Eight Isles tend to be lawful, even rigid, in their devotion to the Imperial Family. As such, they have mainly shunned the Shogun’s reign, preferring to be envoys of Imperial will. When The Demonic War plunged the capital into mist, many Tiefling mages remained by the Emperor’s side to create a great magical circle to shield the Imperial Palace from abyssal influences. Often, a prodigious Tiefling leaves the comfort of their obsidian residence beneath the twin volcanos of Kagutsu to take over a mantle of Shield Maker within the capital.