10 Things to Know About the Pathfinder 2.0 Playtest 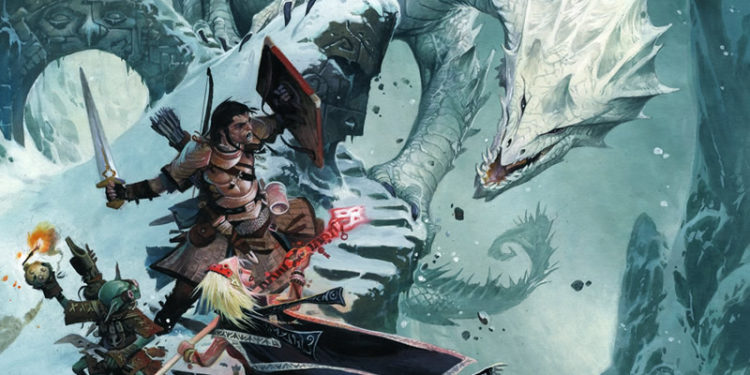 We’ve had a little bit of time for the dust to settle after the big Pathfinder 2.0 announcement back on March 6, 2018. This playtest is Paizo’s big follow-up to the successful Starfinder launch last summer at Gen Con. For those of you who have been too busy to follow the news and previews on Pathfinder 2.0, here is a summary to get ready for the official playtest launch on August 2, 2018.

From Paizo.com
In 2008, Paizo launched an unprecedented public playtest aimed at updating the third edition rules to make them more fun, easier to learn, and better able to support thrilling fantasy adventures. More than 40,000 gamers just like you joined in the fun by playtesting the new Pathfinder RPG rules and providing feedback, and the rest is gaming history. Now, 10 years later, it’s time to put the lessons of the last decade to use and evolve the game once again. It’s time for Pathfinder Second Edition!

Here is the original announcement video with Erik Mona and Jason Bulmahn.

1) Playtest Materials Available as Free PDFs or in Print

All of the playtest products will be released as free downloads on August 2, 2018 on Paizo’s website. If you want a print version, you can preorder before midnight on May 1, 2018 or pick-up a copy at the Paizo booth during Gen Con 2018 in Indianapolis. This is a single print run and using Starfinder’s launch as a measuring stick, they will sell out quick. There will also be a conversion guide cheatsheet.

If you can’t wait to see the new rules at the table check them out in person at one of the upcoming events this spring/summer:

Since the launch of Pathfinder the character art and covers of Wayne Reynolds have been a fundamental part of Pathfinder. Paizo has already had him working for a while on artwork for 2.0, including the cover for the playtest and interior illustrations “with scores of never-before-seen takes on classic Pathfinder heroes, monsters, and treasures“. This is a way for Pathfinder to visually tell everyone this is still the game you love.

The original playtest cover from 2008

From Paizo.com
Wayne Reynolds has been designing new concepts and characters for Pathfinder Second Edition for more than two years now, including updated art for the iconic characters from the Core Rulebook, detailed illustrations of all the key player races, and more (including a new goblin iconic!). The Pathfinder Playtest Rulebook features an all-new painted cover of our favorite heroes battling a white dragon (a throwback to 2008’s “Beta Playtest Edition” cover).

When creating a character using the playtest rules, the first step is to select your ancestry (which used to be called race). Pathfinder has done well with using inclusive language and providing having LGBTQ+ iconic characters and NPCs in their adventures. The typical fantasy races found in Pathfinder such as dwarves and elves aren’t going anywhere, but this is more than just a relabeling of race as ancestry.

Pathfinder’s goblins are iconic baddies. They are found in many Pathfinder adventures and were playable as PCs in the adventure We We Goblins! Playing monstrous races is nothing new and the chaotic evil goblins will still be available in the bestiary for GMs. PC stats for goblin and many other monsters can be found in 1993’s Complete Book of Humanoids. Volo’s Guide to Monsters which came out last year provided PC stats for playing goblins. I think that adding goblins as a playable ancestry is a good idea, but the reception so far has been mixed.

From Paizo.com
Ever since the goblin song from page 12 of 2007’s Pathfinder Adventure Path #1: Burnt Offerings, goblins have been a key part of what makes Pathfinder recognizable as Pathfinder. When we first started looking at what would become the ancestries in the Pathfinder Playtest Rulebook, we knew that we wanted to add something to the mix, to broaden the horizon of what it meant to be a hero in Pathfinder. That naturally brought us to goblins.

All of the 11 Pathfinder iconics from Core Rulebook will all be in the playtest, including Valeros and Seoni who we see on the cover art above. We’ve already seen blog post previews of the fighter, rogue and alchemist. I’m sure we’ll see previews of the rest before the playtest launch.

From Paizo.com
All 11 of the iconic characters from the first edition Core Rulebook are present in the Pathfinder Playtest Rulebook, and we expect all of them will make the transition to the final version of the game in 2019.

The iconics (where is Lini the Gnome Druid hiding?)

The Alchemist will move from the base class list and be included as a core class. Fans of other base classes such as the Gunslinger or Witch will have to wait.

Although their faces are familiar, some of our old friends will be swapping out their gear to better work with their new class options. Valeros, for example, has a shield now, and Harsk will more often appear wielding two melee weapons instead of his trusty crossbow—but Val’s extra short sword and Harsk’s crossbow aren’t going anywhere, and still appear on their illustrations and character sheets.

Similar to the 3 pillars of adventure found in D&D’s 5th edition rules, Pathfinder’s playtest will introduce modes of play.

Over its various edition launches, D&D has added campaign worlds, skipped timelines forward, and jumped around official campaign worlds, settling on Forgotten Realms for 5th edition. Pathfinder is not going to stir the pot on the setting at all. Golarion is an excellent setting with tons of support that can be used with any rules.

They have stated that their “first goal was to make Pathfinder Second Edition feel just like the game you know and love“. It looks like this playtest is trying to rock the boat a bit, but not rewrite the game from scratch.

From Paizo.com
The rules that make up the game have to fundamentally still fill the same role they did before, even if some of the mechanics behind them are different.

Here’s a laundry list of some of the topics that Paizo is going to look at leading up to the playtest:

8) Impact on Other Products

According to Paizo, the playtest will have no impact on existing products such as:

The Retail Incentive Program and Regional Support Program will undergo minor changes to fit the new campaign’s system and rules, but the core concepts will remain the same.

First Edition organized play will continue into 2019, but you’ll need to make all-new characters and play in new scenarios designed to use the playtest rules. The 2018–2019 season will work to tie up several long-running campaign storylines and set the Pathfinder Society up for the Second Edition version of the campaign which will start at Gen Con 2019. First Edition scenarios will stop being made after July 2019.

Not much is changing with the Pathfinder Playtest and Second Edition both being published under the OGL. There will be some bumps during the playtest, with no Compatibility License available for third party playtest publications to officially indicate their products are playtest ready. The good news is that Paizo will be offering a Compatibility License and logo for Second Edition and will reveal more details (including early access to the final rules for publishers) in 2019.