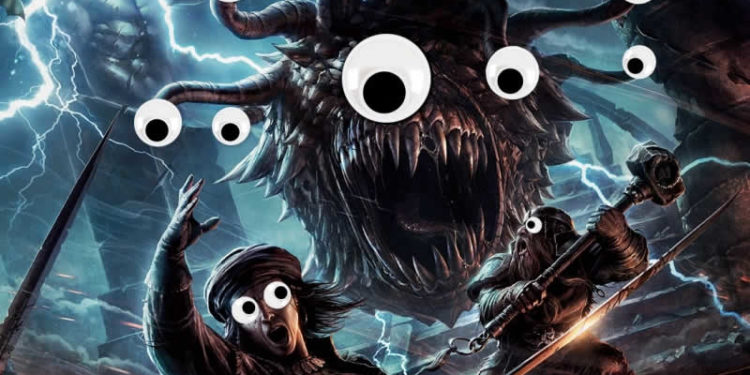 We just received a press release about the Stream of Many Eyes running from June 1 to June 3, 2018 on Twitch. This event will provide a showcase where the new adventure coming later this year will be announced and a bunch of live streaming D&D will be played. If you are a fan of streaming actual play D&D, you’ll find lots of your favorite people from Critical Role, Force Grey, Dice, Camera, Action, High Rollers and others. They are even offering tickets to watch live on June 3 for anyone in the Los Angeles area.

On June 1 – 3 2018, D&D will bring tons of Twitch streamers, actors, comedians and D&D luminaries to the Stream of Many Eyes, a three-day livestreamed extravaganza full of cosplay, crazy sets and amazing stories. During the Stream of Many Eyes – #SOMEDND – the D&D team will unveil the new adventure story coming this year and showcase extraordinary D&D live play entertainment, and it will all stream live on twitch.tv/dnd.

The Stream of Many Eyes starts at 4pm PT on Friday, June 1st, with a visual tour of the studio led by host Anna Prosser Robinson and a roundtable conversation with the D&D team on the new storyline and what makes it so exciting. Dungeons & Dragons will then present live D&D play sessions with Force Grey & Dice, Camera, Action.

On Saturday, June 2nd, the livestream kicks off at 10 AM PT with Sirens of the Realms. Saturday’s games will feature well-known D&D gaming group Girls, Guts, Glory as well newer groups Rivals of Waterdeep and Dark & Dicey, all previewing content from the new story. The entertainment will run all day, wrapping up at 7 PM PT.

Four groups will perform on Sunday, June 3rd, beginning at 11 AM PT and streaming until 8 PM PT. Games will include members of Critical Role, High Rollers, Force Grey and the entire cast of Dice, Camera, Action performing together in costume for the first time.

D&D fans around the world can watch all the excitement unfold on twitch.tv/dnd, and on Sunday only, fans in the Los Angeles area can buy tickets to watch one of the live games in person. The live ticketed experience includes a curated set tour, live performances from musicians, dancers and stunt-people, food trucks, a D&D pop-up store full of merch, and of course some of your favorite gaming groups.

Check out the full schedule and buy tickets at dnd.wizards.com/some. Tickets are limited – so if you’ll be in the L.A. area on June 3rd make sure to grab them quick! Check out the D&D website, follow D&D on Twitter or subscribe to the Dragon Talk podcast feed for all the latest updates and for interviews with our special #SOMEDND guests.