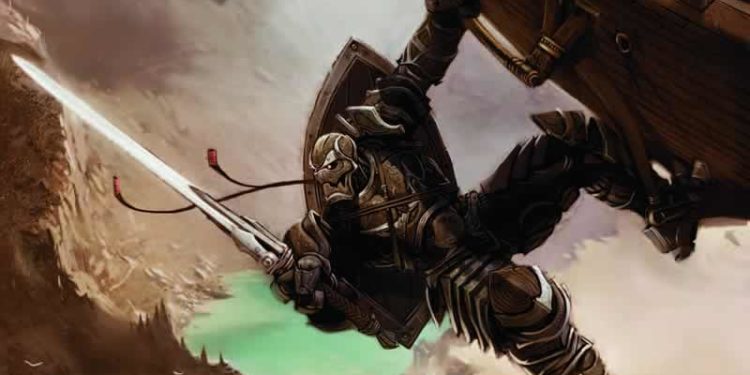 Hey Eberron fans! There’s no need to wait until this fall to see if your favorite setting is getting support for 5th edition. The Wayfinder’s Guide to Eberron is out now for US$19.99 on dmsguild.com and written by Keith Baker (along with Ruty Rutenberg and members of the D&D team). While this Eberron content isn’t Adventurers League legal, we now have 5th edition content to support Eberron that goes far beyond the little bit of Unearthed Arcana support that has been provided. In addition, creating your own Eberron content is now an option on the Dungeon Masters Guild. 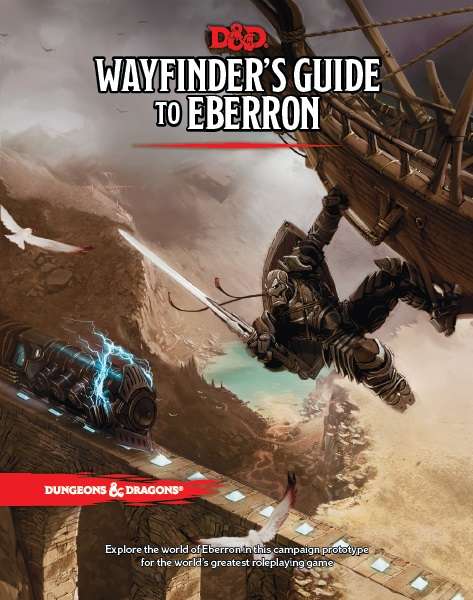 Eberron was born in 2002 when Wizards of the Coast launched a worldwide search for a new campaign setting.

Wayfinder’s Guide to Eberron brings the eponymous campaign setting to fifth edition Dungeons & Dragons, providing an overview of the core themes of the setting and the rules to connect them to current campaigns. It explores the continent of Khorvaire and the great city of Sharn. Herein awaits a fantastical sampling of what this setting has to offer, as well as hooks for compelling adventures of your own design.

Particularly useful is a list of sources for learning more about Eberron.

Taking a quick look at the table of contents you’ll find the 142+ page PDF broken down into six chapters and 3 appendices.

The Wayfinder’s Guide to Ebberon serves two purposes. It is a guide for DMs and players who want to visit Eberron using 5th edition rules. It is also a “jumping off point to create your own monsters, adventure modules, and other tabletop content set within Eberron” to sell on the Dungeon Masters Guild. You’ll find additional support in the form of three downloads that provide artwork and maps that can be used for content created for Eberron to be sold on DMs Guild.

Added: Mike Mearls has tweeted that this PDF will be a living document and will be updated as new content comes through Unearthed Arcana and when changes from playtesting are made. So anyone who is holding off and waiting for the Mystic or Artificer, you can purchase it now and get the updated PDF later, once the mechanics get though Unearthed Arcana.

There is also a Guild Adept supplemental available:

From the Press Release

More enfranchised D&D fans may know that Keith Baker created the Eberron setting as part of the Fantasy Setting Search conducted in 2002, and the D&D team has been working with him to update the setting. The first step is the Wayfinder’s Guide to Eberron, a digital release in the Dungeon Masters Guild online marketplace, which will serve to collect feedback on adjusted races, dragon marks, new backgrounds and more. Fans can also use this document as a jumping off point to create their own monsters, adventure modules, and other tabletop content set within Eberron and put it up for sale on the Dungeon Masters Guild (dmsguild.com).

“It’s been sixteen years since I planted the first seeds that would become Eberron, and watching it grow has been an amazing journey,” Keith Baker, creator of Eberron. “So many good people have been involved in creating the world we see today, and it’s been wonderful to see it come to life. I can’t wait to see what people do with the world!”

Since the inception of Dungeons & Dragons fifth edition with the public playtest involving more than 175,000 fans and continuing with the current record-breaking success of the brand, the focus has been on listening to fan feedback. D&D is excited to travel to Ravnica and Eberron in 2018 and other planes beyond in 2019!

Play D&D in the Magic: The Gathering ...