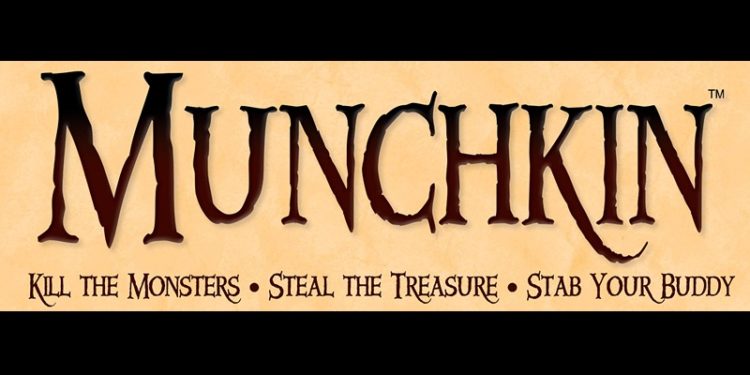 In the Grim Darkness of the Far Future . . . Kill the Monster, Steal the Treasure, and Stab Your Buddy!

Steve Jackson Games and Games Workshop announce the biggest, back-stabbiest, most loot-filled heavy-weapons bonanza of the year: Munchkin Warhammer 40,000, coming in 2019 to a game store near you!

Since the original Munchkin card game hit the market in 2001, the Munchkin brand has sold over 9 million games and accessories worldwide. Warhammer 40,000, now in its eighth edition, is one of the longest-lasting classic games of miniatures combat. Now these two popular games are merging into a storm of carnage and weirdness guaranteed to satisfy armies of gamers.

As with all Munchkin games, Munchkin Warhammer 40,000 will combine easily with the rest of the extensive Munchkin line, including Munchkin Zombies, Star Munchkin, and Munchkin itself. 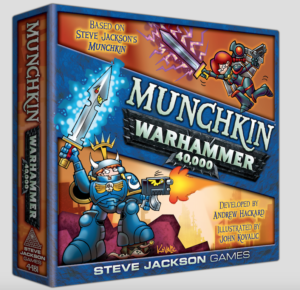 “I have never seen a game store without a Warhammer 40,000 section,” said Hackard. “It’s a pleasure to get to play around in a setting that has such a rich history and so many dedicated fans around the world!”

Steve Jackson Games, based in Austin, Texas, has been publishing games, game books, and magazines since 1980. SJ Games recently released the Munchkin Collectible Card Game, based on its best-selling game Munchkin. Other top sellers are Simon’s Cat Card Game, Zombie Dice, and Illuminati. Past hits have included Car Wars and the GURPS roleplaying game system. Steve’s very first game, Ogre, originally published in 1977, has been recently released as a video game on the Steam platform, bringing a tabletop classic to a new generation of fans.

Games Workshop® Group PLC (LSE:GAW.L), based in Nottingham, UK, produces the best fantasy miniatures in the world. Games Workshop designs, manufactures, retails, and distributes its range of Warhammer®: Age of Sigmar® and Warhammer® 40,000® games, miniature soldiers, novels and model kits through more than 470 of its own stores (branded Games Workshop® or Warhammer®), the www.games-workshop.com web store and independent retail channels in more than 50 countries worldwide. More information about Games Workshop and its other, related, brands and product ranges (including its publishing division ‘Black Library’ and its special resin miniatures studio ‘Forge World’) can be found at www.games-workshop.com.