Today I present Varokaj – a fantasy area of that you can use for a one shot, as part of the Rikirta setting, or link it to other settings.

Georgraphy – Seven rivers flow from northern mountains into Umbral Sea to the west. There are swamps closer to the sea and Moorlands higher up in the hills.

Warm winds are common, as is acid rain, which has removed 25% of the woodlands over 10 years. The moorlands are humid all year round, and very cold at night.

Ruins – There were seven citadels, each 3-5 levels above ground, 5-9 levels below ground.
Many Constructs (ranging in size) are patrolling the ruins.

What was – Dwarven nation with some Gnomes and Humans living in the upper ruins. To Dwarves the fall of this nation is recent, and some consider it to be part of an ongoing war, rather than a past event.

Varokaj was a Dwarven Alliance nation of seven citadels.
• In Varokaj, During a Vandyr moon lunar conjunction a dozen portals opened and Everburn creatures – Hydra, Manticore, Naga & Salamanders stormed the area.
• Elven archers and Lugat (Bat folk) assassins travelled to the front to perform hit and run raids against the fire creature camps.
• Over the following decade 10,000 Dwarves fled west, 20,000 fled north.
• War ended with the Order of Thalassa shutting down five major portals in one night.
• What few know is the Viridian Thorns increased influence in Xenek by putting people in key positions and giving information about Everburn activities to aid the nations nearby to slow the advance of Fire Creatures. 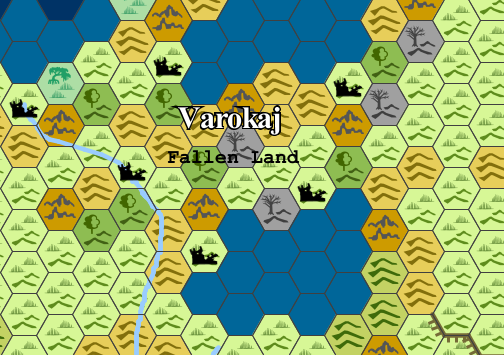 Twin Lakes : There are two lake freshwater lakes to the north and south of Varokaj. However since the Everburn creatures invaded with their portals linked to the moon of Fire (fire elemental plane), these lakes have become more polluted with sulphur and silicon. Even before the pollution the lakes were deep and murky.

Adventure Hooks for Varokaj
• Dwarves want to recover their family heirlooms and records within the ruins.
• The Druid Circle see the destruction of the Twin Lakes and seek to remove the polluters and so the renewal of the lakes can begin.
• Myrkr Alliance (enslavers and corrupters) don’t want the Everburn creatures to keep this strong presence in this area, and hire teams to remove the portals linking Varokaj to the fire moon.
• A wealthy wizard wants someone to capture the constructs and bring some back so they can figure out how to make their own.

Where to slot in Varokaj in other settings –
• Greyhawk-West of the Yatil Mountains, Vandyr creatures raid Human lands.
• Faerun-East of Unther, Tribes of Unther consider the area ruins rich with treasure but very dangerous to be near.
• Krynn-North of Solamnia. A company of Knights were sent to the area but did not return.