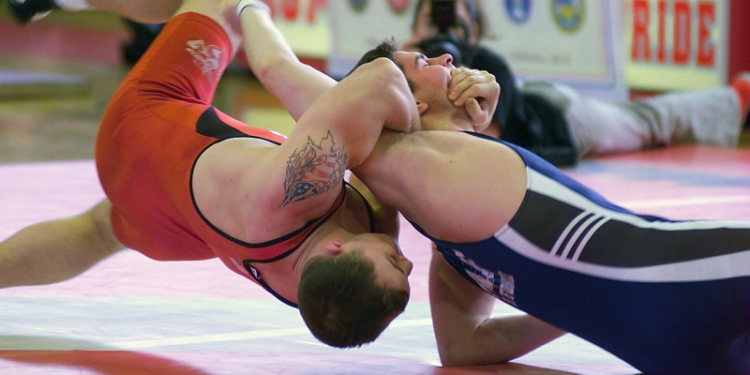 A few weeks back, I mentioned in the comments that I wanted to write a collection of maneuvers to support grappling for Battle Master fighters, particularly inspired by my nearly-fanatical devotion to the 4e Brawler fighter. My chief weapons are surprise (I thought I was going to write about something else this week), fear (writing good maneuvers is hard), and a ruthless efficiency (?).

Now, I haven’t yet played a grappler of any stripe in 5e. From reading other people’s work on grappler builds online, I see that there are some subtle points at stake, easily missed. Particularly note the linked thread’s analysis of the Grappler feat, which can be summed up as “mostly no.” That thread doesn’t continue into particular subclasses. We can see, though, that the Battle Master’s die-value damage add is more useful to a grappler than a critical hit on an unarmed strike.

I’m taking it as a given that there are two fundamental approaches to playing a grappler: one empty hand (the other holding a one-handed weapon), or two empty hands. We’ll see where it makes a difference, but in many cases, grapplers without a weapon of their own don’t have great ways to deal more than 1d4 or 1d6 + Str damage.

Let’s start with a recap of the existing maneuvers that do grappling Battle Masters the most favors.

Commander’s Strike is solid for grapplers, especially grapplers with a rogue buddy. The grappling combat style is about prioritizing control over personal damage output, and Commander’s Strike responds favorably to that approach. You also don’t have all that much pressure on your bonus action.

Disarming Attack definitely has good uses. Grappled creatures are going to keep trying to hit you, so dropping them down to their unarmed damage (if they’re weapon-wielders) is great. All the better if you can pick up the weapon they drop and beat them to death with it. (Beowulf believes in your right to bear arms.) The more your approach to grappling is about apprehending targets you mean to keep alive, the more this becomes a must-buy.

Distracting Strike is only really useful if you can’t knock the creature prone. Putting creatures on the ground and keeping them there is one of your main tactics, so prone immunity is a significant problem. Maybe not common enough to merit a precious maneuver choice, though.

Evasive Footwork is ideal when you want to blow past the front-line brutes and grapple the back-line geeks.

Feinting Attack is probably not a priority for you, because your main thing is not about attack rolls.

Goading Attack requires an attack roll, and you can probably achieve effective tanking by grappling and dragging, so… lower priority.

Maneuvering Attack could be useful for you, but the situation it solves is one that a grappler prefers to solve another way (by grappling, moving, and isolating their target).

Menacing Attack requires a melee weapon attack, which can just be a punch. If the target is grappled, well, they’re sure not moving away from the source of their fear. Corner case, but some good use.

Parry is great for you, because you probably aren’t an empty-hand-and-shield grappler – so you’re paying for your tricks with AC.

Precision Attack is not for grapplers in itself, but it’s going to be the obvious model for one of my new maneuvers.

Pushing Attack is nice for dealing damage in addition to moving your target, but that would remove them from your grapple (forced movement beyond your reach!), so no.

Rally gives you something to do if both of your hands are grappling targets right now.

Riposte has a place if you’re a weapon-and-empty-hand type, all the better if you’re knocking targets down to impose disadvantage. Otherwise its damage just isn’t going to be great.

Sweeping Attack is not that great at the best of times, and grappling doesn’t seem to help it.

Trip Attack is another way to do that thing you do, which is knocking people down and keeping them there. If for some reason you know that a creature is great at Athletics or Acrobatics, but doesn’t have a great Strength save, this is helpful. Otherwise, it’s for when you’ve got someone grappled and want the damage and the knockdown, rather than just the knockdown.

My initial conclusion is that you can find enough good things on this list to have fun as a grappler, but there’s nothing custom-built for you. Let’s see what fixing that might look like.

Grappling Attack. When you hit a creature with a melee weapon attack and have a free hand, you can expend one superiority die to attempt to grab the target. You add the superiority die to the attack’s damage roll, and the target must make a Strength or Dexterity saving throw (its choice). On a failed save, you grapple the target.

Mighty Grasp. When you roll a Strength (Athletics) check to grapple a creature or escape a grapple, you can expend a superiority die to add it to the roll. You can use this maneuver before or after the ability check, but before any effects of the ability check are applied.

Sleeper Hold. When you are grappling a creature that is not grappling you and you have a hand free, you can expend two superiority dice to establish a sleeper hold. This replaces one attack as part of an Attack action. As long as the creature remains grappled, when it starts it turn, it takes bludgeoning damage equal to two of your superiority dice + your Strength modifier. You can use this maneuver while you have no hands free by going prone.

Throw. When you are grappling a creature that is not grappling you, you can throw it, dealing damage to the creature and whatever you hit with it. You can expend one superiority die to make a melee attack against a creature or object within your reach, or a ranged attack using your Strength modifier against a creature or object within 10 feet. This ends your grapple and leaves the grappled creature prone in a space adjacent to the second target. On a hit, the creature you were grappling and the second target take damage equal to your superiority die + your Strength modifier, and the second target must make a Strength saving throw, falling prone on a failure. On a miss, only the creature you had grappled takes this damage.

One always hopes that the story or image behind a piece of mechanics speaks for itself, but even so. Inability to grapple as an opportunity attack is one of the significant weaknesses of the style, so Collar Grab is a solution. It’s a maneuver, so you can’t do it all the time – which in turn is why it’s important for it to do some damage.

Grappling Attack is the central concept of sword-and-open-hand. Just as the Trip Attack maneuver sort of tacks a free Shove onto your successful attack, Grappling Attack does that with a grab. It’s an action economy aid that costs a CS die, so it should be fine. It’s also a modest aid for grappler damage output.

Mighty Grasp is Precision Attack for grappling, plain and simple. It should make you a dominant enough grappler that you feel less of a pull toward multiclassing into something that grants Expertise. I hate that Expertise means rogues and bards wind up doing better at skill checks for things hat someone else should handle well, because of the pressure to class-dip.

Sleeper Hold asks you to stake two dice in exchange for potentially getting to deal their damage value multiple times. That’s partly a control on frequency of use – Relentless doesn’t give you enough dice to keep doing this. It’s also so that you’re doing enough damage per round to feel somewhat significant. This would definitely need testing across multiple levels of play.

Throw is a variant of a feature I wrote for In the Company of Giants (5e, revised), there called Struggling Weapon Proficiency. Grapplers usually never want this special hug to end, but I figure there are times when letting the bodies hit the floor is worth it.

There are a lot of other potentially great grappling moves that could be represented here. I don’t follow MMA, though Colin did point me to some good things to look up on YouTube. I just couldn’t figure out how to generalize them into maneuvers that kept to 5e’s design aesthetic and generalized well to the range of monster body types. Counter-grappling – moves that require both you and your opponent to be grappling one another – are good, but that trigger depends enough on the thing the player can’t control that I couldn’t make it work in time to release this article.

The other things I messed around with for awhile were eye gouges, since the blinded condition is a standard part of the game; head butts, with some kind of stun chance; and moves that prevented the target from speaking, because that’s a normal part of an infiltration sequence in movies. Uh, I’ve been mainlining Person of Interest for a long while now, and Reese and Shaw do a hell of a lot of grappling, especially starting from held-at-gunpoint.