Blades of the Abyssal Forge 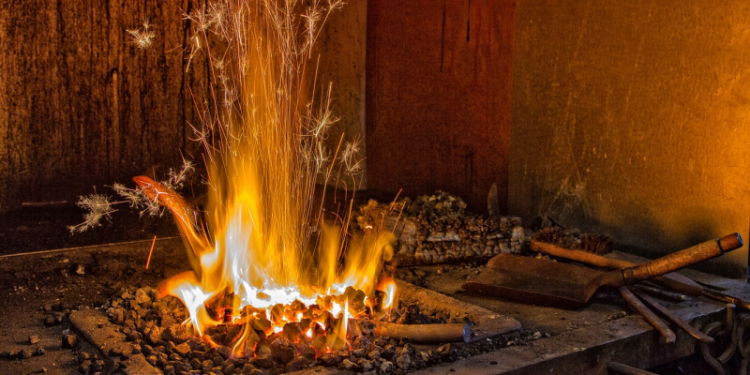 I’ve had this idea sitting in my list for a couple of months now, and I figure Halloween is as good a time as any to do something with it. A smith captures a bunch of different types of demons and binds each to a weapon. New kinds of magic weapons never go out of style – and you could use any of these as the concept for a skill challenge/crafting fight, of the kind Colin has written about. (Title of the article notwithstanding, they aren’t all blades, or even all conventional weapons.)

When you hit a creature with Uthulmaug and reduce its hit points to 0, it moves up to 10 feet in a direction of your choosing, as long as its speed is not 0. At the end of that movement, it explodes. Creatures within 10 feet of it roll a DC 16 Dexterity saving throw, suffering 3d8 fire damage on a failure, or half damage on a success. You gain advantage on this saving throw, and on a success, you suffer 2 points of fire damage. You can use this power three times, and regain expended uses at midnight.

While you are attuned to Uthulmaug, when your hit points are reduced to 0, you can use your reaction to move up to 10 feet, and then you explode. Creatures within 10 feet of you roll a DC 16 Dexterity saving throw, suffering 6d8 fire damage on a failure, or half damage on a success. You can use this power once, and regain use of it at midnight, or when you have three failed death saving throws.

While you are attuned to Uthulmaug, you have disadvantage on death saving throws.

Varhool, the Bands of Doom

These bracers are inscribed with the blasphemous Abyssal runes of Varhool’s name and deeds, ending with his binding into the bracers and the bracers coming into the possession of whichever PC picks them up. Despite the limited space available, there always seems to be room for one last tale.

While you wear these bracers, you gain the following:

This magical, wood-hafted mace has misshapen teeth set into its striking face. As a bonus action, you can touch the mace to the body of a Small or Medium humanoid that has died within the past minute. One of the Thousand Damned leaves the mace and transforms the body into a dretch under your control.

The DM secretly rolls 1d12 each time you finish a long rest. You can telepathically control that number of dretches simultaneously. If you try to control more dretches than that at any one time, all remaining dretches cease obeying your commands and attack you. If you die from their attacks, your soul joins the Thousand Damned, and you can’t be restored to life until the weapon is destroyed.

Rhamnir, the Maul of Spite

You gain a +2 bonus to attack and damage rolls made with this weapon, and you deal double damage to objects and structures with it. You have advantage on Shove attacks while wielding Rhamnir, and when you successfully Shove a creature away from you, you can use your reaction to make an opportunity attack against them. If the attack hits, it deals an additional 2d6 bludgeoning damage, and the creature is also knocked prone.

If you do not already have horns, while you are attuned to Rhamnir, curved horns grow from your head, like a goristro’s horns.

You gain a +1 bonus to attack and damage rolls made with this weapon, and it has the finesse property. While in bright light, you have disadvantage on attack rolls, as well as on Wisdom (Perception) checks that rely on sight. The glaive can ignore any amount of cover, up to five feet thick, as long as it is not in daylight. You still attack with disadvantage against targets that you can’t see.

Man, creating magic weapons is super fun, even if there is basically no guidance on the power level of each rarity grade. I’ve done what I could.

As you no doubt guess, these weapons cover balors, barlgura (I like the hyphenated spelling, because it makes the whole word so much weirder), dretch, goristros, mariliths, and shadow demons. My favorite parts are the description of Varhool and the “benefits” of The Thousand Damned. Also, I like that Uthulmaug makes things blow up a lot, but doesn’t give up much protection from it. It is, of course, completely on-message for a lightning sword to make creatures explode in fire damage, because balors, I don’t know what to tell you.

If you enjoy these, let me know and I can follow up with other forms of demons, and possibly move on into daemons (yugoloths) as well.

Stranger Things’ Demogorgon and Demodogs for your ...