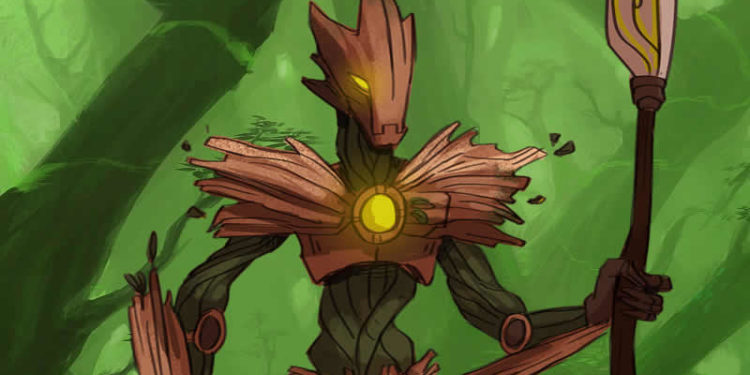 Back in 2014, I decided it was finally time to tackle building my own fantasy world called Vodari. In the past I’ve added details to published campaign settings, but I was a rookie at building a world from scratch. I didn’t let my inexperience stop me from taking our ideas and turning them into a shared world that I ran a weekly adventure in for my players for a year and half for D&D 5e.

This article looks at Mechasouls, a specific player race options for D&D 5e that I have started to provide as an option for players in my Vodari campaign world. I wanted to create a race that takes inspiration from gearforged, treants and warforged and creates something that has parts of both. From a power level perspective, this race is not too overpowered, similar in power level to Firbolgs, Goliaths and Tabaxi. I see Mechasouls being excellent fighters, barbarians, druids, and clerics when looking at the combination of traits.

“I left my workshop for the day. When I returned the next afternoon, I found a sleeping mechasoul in the place of my project. Since then, I’ve raised Treeleaf as I would my own child. I’ll tell anyone who’ll listen that mechasouls are alive and deep inside them beats a soulwood heart.”

Mechasouls were built, but are alive, the result of gnomish technology being unintentionally combined with a forest spirit.

Mechasouls vary in appearance but generally look like a humanoid that was carved out of metal and wood with green leafy hair and large black eyes.

NEW TO THE WORLD

Mechasouls are a young race that are new to Vodari. When foresters from Xolen cut down sacred soultrees on the islands of Aubori, they unknowingly set in motion the awakening of a new race. The soulwood lumber was combined with steel, brass and gnomish technology to build mechanical devices for mining, manufacturing and various other uses. While these devices first appeared to be physically identical to other machines, over time, some of the mechanical devices shifted from their simple, practical forms into that of a humanoid, each one unique. Somehow the materials that make up its body combined with spirit found in the soulwood to create a living being.

When a mechasouls awakens, it enters the world with no memory of its past life, knowing nothing of the world like a child of any other people. A mechasoul is not a simply a construct, but a living thing. While mechasouls were originally constructed with a significant amount of metals and technology, those parts have combined with the wood of the soulwood tree into a unique type of flesh and bone. They can be hurt, die, and be healed. They need to breathe, eat and drink. Just like any person, mechasouls have thoughts, emotions and seek out social bonds.

SEARCHING FOR  A PLACE TO BELONG

Mechasouls are few in numbers and do not have a separate society of their own; instead, they fit themselves into society as best they can. Mechasouls are as likely to be raised in a gnomish family who loves them as they would their own child as they are to be simply trained to be servants or soldiers in a squad from their time of awakening.

Many mechasouls take up the life of an adventurer to learn about the world and find a place to call home.

Mechasouls are named by their creator, usually something related to their appearance or practical like a model number. Some mechasouls find that a elven or gnomish name calls to them, perhaps it is the name of their spirit in their previous life.

Your mechasoul character has the following racial traits.

Ability Score Increase. Your Strength, Constitution and Wisdom scores each increase by 1.

Age. When a mechasoul takes form and becomes sentient, it is physically complete, but only has the mental and emotional maturity of a young child. They fully mature at around the age of 5, but many are forced to work while they are still in their juvenile state. While no mechasoul has been alive long enough to start to show signs of aging, some believe they could live hundreds or thousands of years, like the sacred trees they were constructed from.

Alignment. Mechasouls were created to be simple mechas who follow orders, but they hold the spirit of a woodland elf. They tend to be good, but often struggle to find a balance between obedience to their design and the freedom their soul desires.

Size. Mechasouls are usually taller and heavier than humans, standing between 6 and 7 feet tall and weighing over 350 pounds. Your size is Medium.

Speed. Your base walking speed is 30 feet.

Connected to Nature. You feel an intense connection to the natural world. You have proficiency in the Nature skill.

Fey Ancestry. You have advantage on saving throws against being Charmed, and magic can’t put you to sleep.

Purpose Built. You were originally built as a machine to help with cooking, masonry, weaving, smithing or another trade. You are proficient with one type of artisan’s tools related to this purpose.

Darkvision. You have superior vision in dark and dim conditions. You can see in dim light within 60 feet of you as if it were bright light, and in darkness as if it were dim light. You can’t discern color in darkness, only shades of gray.

Natural Armor. You body has a tough surface made of wood and metal. When you are not wearing armor, your AC is 13 + your Dexterity modifier. You can use your natural armor to determine your AC if the armor you wear would leave you with a lower AC. A shield’s benefits apply as normal while you use your natural armor.

Powerful Build. Here you count as one size larger when you are determining your carrying capacity and also the weight that you able to push or drag or lift.

Let me know what you think of this homebrew race below.

Unearthed Arcana: Of Ships and the Sea ...