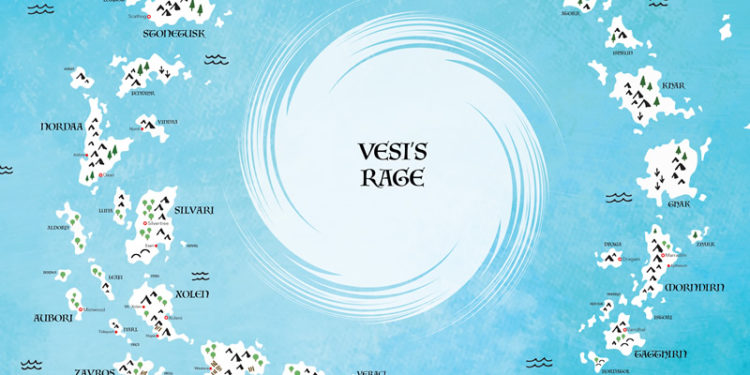 Atlantis, Westeros, Wonderland, Neverland, Oz, Panem, Camelot, Discworld, Barsoon, Pern, Shannara, Middle-earth, Narnia and countless other fantasy worlds provide the backdrop for adventures. Your tabletop RPG adventures deserve a setting with a rich history, exciting locations, terrifying monsters and colorful people. Last year, I decided it was finally time to tackle building my own fantasy world and I thought I would share what I learned from my triumphs and tribulations as a rookie world builder.

In the past, I was happy running adventure modules or setting my own adventures and campaigns in existing settings (Golarion, Nentir Vale, Forgotten Realms, Dragonlance). I even ran a campaign using homebrew rules for a D&D 4th edition game based on the cartoon Adventure Time and created my own rules for a videogame-like Zelda one-shot. All of this experience involved creating original content and even some world building, but I had no idea how much more work was needed to create a whole world from scratch.

I’m sure I’m not the only gamemaster out there who hadn’t created their own world after years of playing in other people’s creations. As my D&D 4th edition campaign was starting to wind down, I decided it was time to build my own world from the ground up. In this five part series I’ll share the mistakes I have made and the things I got right when I started to build a campaign world called Vodari.

‘The Big Picture‘ is the first subtitle in the D&D fifth edition Dungeon Master’s Guide. When I first starting building out Vodari in the fall of 2014 the DMG had not even been released yet and I had just started to read through the Monster Manual. With a huge task in front of me (though I had no clue how huge), I thought I should answer some questions before I started to plan out my campaign world. Pathfinder’s GameMastery Guide and D&D Dungeon Master’s Guide (any edition) are great resources for ideas and advice. These are the questions I decided needed answers to get the world up and running. Not a perfect list, but the list I went with for my rookie attempt.

This is a pretty important question. Building a world is a ton of work and there are excellent published settings that already exist. If you start to tackle this huge task, make sure you have a solid reason.

Creating your own world allows you to create a setting where anything can happen, you are free from the baggage that comes with existing settings and your players will be visiting a world that is all new, created just for them. The problem is that filling a world takes a ton of work – even if you heavily borrow. There is a good reason why campaign guides are so long and full of rich details, you need it. You can easily run an adventure in your own setting without a fully populated world (or by modifying an existing setting), but be ready to answer the big questions about your world and be ready to keep drawing the map as your players reach the edge.

After running a campaign in the landlocked Nentir Vale (the default setting for D&D 4th edition), I wanted my players to have a wide open world they could explore without having to slog across wilderness between “points of light”. I also wanted big cities, exotic locales and new monsters. I looked at settings from primitive to space, but my players and I selected a world of islands where you move between locations by sailing. We all agreed this would be a big change and would allow us to see all kinds of new monsters and places above and below the surface of the sea. Vodari did not already exist and was going to require me to build out a fantasy world.

2) What is the genre and style of the game I want to run?

I liked the idea of pirates, but I didn’t want to run a full pirate campaign like Skull & Shackles (Pathfinder) or Sea of Fallen Stars (Forgotten Realms). I decided I wanted to create a world where pirates would fit in well, but we could just as easily sail to visit coastal barbarian villages, huge port cities, undiscovered islands or undersea kingdoms. I wanted a world that was fun and full of swashbuckling adventure. I wanted a world where the gods and magic existed, but technology was starting to advance and ships could have real cannons. A world where story mattered but spending a few sessions hacking and slashing would work too. I wanted a world where I could run 3-5 session adventures, but build towards an overall campaign level threat.

3) What rules are the best fit for this style of play?

For my new campaign, I wanted to emphasize storytelling more and was finding 4th edition naturally pushed me to running long combat encounters that I linked with short interludes of exploration, roleplaying and skill challenges. In addition, some of my players were new to tabletop RPGs and loved D&D 4th edition.

When I was looking at what rules to run my new campaign in, I had already decided it was time for 4th edition to retire. Pathfinder would give me a ton of ready to use material for running a pirate campaign, but it wouldn’t be the best match for improved storytelling. I knew that something like Dungeon World could really increase our storytelling as a group, but it might be a swing too far away from the D&D style crunch we all loved. I decided that Dungeon & Dragons 5th edition would be the best match for our group. I hoped it would be familiar and put a focus on running adventures balanced between combat, exploration and social interaction.

Sometimes choosing the latest and greatest new rules is the right choice, just make sure it matches your goals and provides a type of gameplay you and your players will enjoy.

4) When does this campaign take place? What is the History of my world?

Some people like to start building out a campaign world with a map. I drew a map pretty early on, but I started with a few key names and a brief intro of how the world my players would be playing in came to be.

I mapped out the history before the godwar, but this is the zero year event and my campaign is set 1000 years later when civilization has started to return in the scattered islands of Vodari (I parked any ideas for campaigns set in the past on a large Pangaea-like continent).

You only really need to create enough history to support your campaign and make the world feel lived in. You can also add history as you go. Most campaigns don’t need more than a page or two of history at the start of a campaign, but revealing more more about the world’s history as they travel in it will be appreciated.

I’ll go into more detail on my process of developing the map, mythology and history of Vodari in Part 2: A History for Your World.

5) How does the world work?

From the start I had a solid grasp on how I wanted Vodari to work. I wanted to leave arcane and divine power at a level that would be typical of a standard D&D setting, but I needed to bump up technology to a renaissance level. Renaissance level technology allowed me to put pistols in the hands of my players and cannons on the decks of their ships. It also tied into my history where the barbarian tribes were defeated by the technological superiority of the larger kingdoms, ending the era of endless warfare.

With the magic and technology of Vodari decided, it was time to move onto the geography (weather, seasons) and culture (calendars, holiday, politics, economics and religion). Once that was out of the way it was time to look at House Rules to see if I needed to create my own feats or other rules.

6) What lives in my world and where do they find it?

The people are the most important part of the world. You can come up with a fantastic setting and history, but without interesting people it will feel empty. When building out a world for D&D, you can go with standard fantasy races and monsters or you can go crazy and come up with your own original creations. How these races interacted in the past and present is what helps fill in your world.

For Vodari, I decided that the standard races available in the Player’s Handbook would work, but I wanted to create a seafaring feel too. I added in Minotaurs (a nod to the seafaring Minotaurs of Dragonlance) and some subraces too for the Elves (aquatic) and Dwarves (aquatic and ice). For the monsters, I had the entire Monster Manual available that was full of new great options for aquatic monsters and everything my players would encounter on land too. Creating unique monsters was not a priority for me, since the players will be traveling to such diverse environments and there were so many monsters my players hadn’t faced in our last campaign. But as I have gotten into specific adventures, I’ve started to create unique traps and monsters or re-purpose content from Pathfinder Skull & Shackles.

I’ll go into more detail on Vodari’s races, monsters and more in Part 6: Filling Your World.

7) Where does the campaign take place (or start)?

I wanted my campaign to start on a small island at the edge of civilization. This would give me time to start with a small town and build out the details of the locations which were only outlines as they visited them. I really liked the style of starting out in a town like Fallcrest (D&D 4th edition) or Sandpoint (Pathfinder Beginner Box). I could have dropped my players in a few places on the map, but I let them decide the specific location based on their backstories during a session zero. During the session zero we also looked at the player character backstories, ideals, flaws and bonds to find ways of tying them together. I used these details my players provided to add onto the notes I developed outlining Vodari’s places, NPCs and plot hooks.

I’ll go into more detail on how I let my players help me fill in the world in Part 7: Letting Your Players into the World.

Each week I’ll add another part to this series. Here is a list of the upcoming parts.

A Closer Look at the Cartography of ...