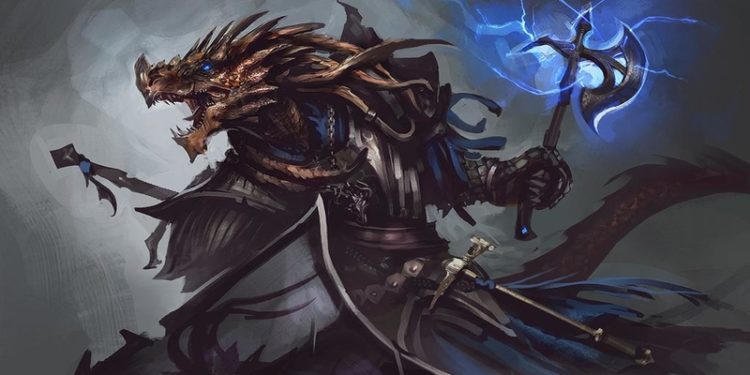 If you’re anything like me, you dreamed about being a dragon as a child. The power, the freedom, the awesome scales! By choosing to roleplay dragonborn you can capture some of that magic and get to wield a big ol’ sword, or sling fireballs, or even transform into a ferocious dragon-bear.

Dragons All the Way Down

It’s no surprise that in the Player’s Handbook describes the dragonborn as a proud race descended from dragons. Exactly how they are descended from them is up to you and your Dungeon Master. In any case, this connection to dragons creates a central core that you can form your identity around, or play against to create a unique and interesting character.

Think about how your character feels about this connection. It is one that they can’t get away from. As one of the more rare races, generally, you move through the world with other races seeing you as dragon first and everything else second. A red-scaled dragonborn passing through a valley ravaged by a red dragon may have a harder time getting a room at the inn or may be able to sneak into the dragon’s lair disguised as a servant.

You could also play a character who rejects their draconic heritage. Perhaps you were raised among a different race, or in a multi-cultural city and the fact that you are a dragonborn is inconsequential to you. Maybe you don’t even speak draconic, and prefer to worship dwarven gods instead.

Even the most devoutly dragon dragonborn can be interesting to play. Maybe you hoard your gold unconsciously, or you have a cruel streak or temper you have to control. The tension between a darker chromatic dragon nature and an intention to be good-aligned can be a very interesting and fertile place to roleplay.

If you are a metallic-scaled dragonborn, how do you feel about having to live up to the reputation of your good-aligned dragon ancestors? You could be something like a silver dragonborn bard who was pressured to enter the service of Bahamut by their clan but just had to dance.

“The clan is more important than life itself,” says the PHB. This is just the tip of the iceberg of their devotion to their clan. Dragonborn seem to have a focused drive that is channeled through their role in their clan. Their conduct reflects on the clan at all times. This should be at the forefront of their decision making: How does this reflect on my clan?

Dragonborn, on average, don’t seem to seek personal glory, but rather glory for their clan. They are the sum total of their ancestry, and take great pride in upholding that tradition.

You can work with your DM to decide exactly how clan life is structured, but there are hints in the PHB that it is rigidly structured, with roles being given to dragonborn and an expectation to maintain that role at a high standard of excellence.

The Player’s Handbook talks about how some dragonborn serve true dragons as servants or soldiers. These roles can serve as a basis of creating what your clan does, or is known for. They could even be a clan of artisans, explorers, or mages.

What happens when a dragonborn pursues a goal that goes contrary to the clan’s ethos? Like, a dragonborn wanting to become a druid in a clan of soldiers. How do they navigate the politics of their clan?

When roleplaying dragonborn, think about how your character fits into their clan and what they are expected to do for the clan. What if this runs contrary to their own wishes? This conflict can lead to great roleplaying opportunities. What happens when the thing you have to do to complete your quest runs against the wishes of your clan? What if your clan is protecting an evil dragon masquerading as a good one? The struggle to be true to self and true to the clan can define a dragonborn character arch.

The clan comes before the worship of the gods, as dragonborn have a cultural attitude of self-sufficiency that informs much of their culture. Clans turn to other clans for help before they turn to the gods.

This kind of can-do attitude can be very fun to play and can lead to some great conflict. How does your character react when other races are proven to be less self-sufficient, less capable than yourself?

Your personal quest for self-mastery can manifest in a number of ways, from wanting to accomplish a heroic feat (like casting a legendary 10th level spell), to something more mundane, like being a master potter. It’s up to you and what makes sense for the campaign.

Consider these questions when coming up with your dragonborn’s backstory: