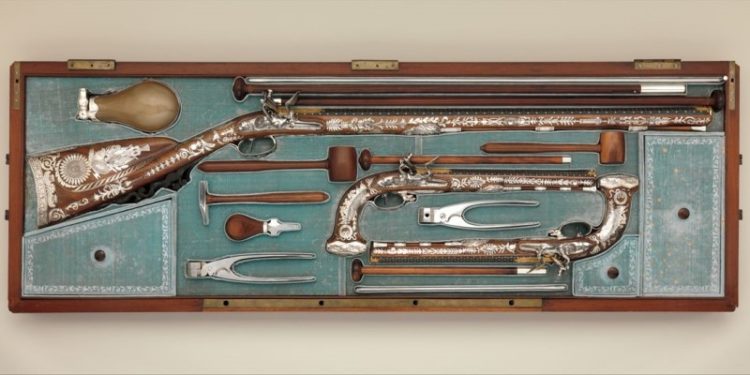 I’ve spent all week – month, whatever – waiting with bated breath for the UA Artificer to drop, and as of this writing it still hasn’t. Instead, here’s a collection of six magical flintlocks that your artificer might use… assuming it makes any sense for a Mk. II artificer to use a magic gun rather than a feature that can’t be modified in any way.

The powers of this magic weapon change based on your current planar location. The images engraved on the stock and barrel indicate the kinds of creatures it deals additional damage to in its current location.

This fabled set of firearms were the last great creation of the Immortal Emperor’s (Editor’s note: a thing from my setting – we are not Bonapartists here) master gunsmith, who brought both fine art and arcane innovation to the work. Attuning Threefold Vindication requires a long rest rather than a short rest, but attuning Threefold Vindication grants attunement to all three firearms and the magical tools found within.

You gain a +2 bonus to attack and damage rolls with this magic musket. When you reduce a hostile creature to 0 hit points with a ranged attack using this weapon, you can make another ranged attack with this weapon, without reloading. If this bonus action attack hits, the damage it deals is necrotic. Once used, the bonus action attack property can’t be used again until Harvester rests inside the case of Threefold Vindication for 1 hour, or until the next dawn.

When you hit with a ranged weapon attack using this magic pistol, you deal an additional 1d6 radiant damage. As a bonus action, you can make the silvery runes shed bright light in a 20-foot radius and dim light for an additional 20 feet.

You gain a +2 bonus to attack and damage rolls with this magic pistol. As an action, you can fire a shot that splinters into leaden rain. All creatures within a 30-foot cone originating from you must roll Dexterity saving throws, suffering 4d10 piercing damage on a failed saving throw, or half damage on a success. Once you use this shot, it can’t be used again until Rainfall rests inside the case of Threefold Vindication for 1 hour, or until the next dawn.

Tools of the Last Gunsmith

You gain a +2 bonus to tinker’s tools checks you make with these tools. As part of a short rest, you can either automatically repair one fouled firearm for free (if misfire rules are in effect), or you can change the damage type of a firearm from piercing to bludgeoning, slashing, or fire. This change lasts for 1 minute after the next time the weapon is fired.

In a land where the Code Duello is most praised and respected, the Grand Duke commissioned the creation of a brace of incomparable pistols, intended to put the greatest strength in the hand of the one whose cause was the most just. He believed that he was wasting his time in hearing endless complaints of neighbor against neighbor, and he feared that a coin-flip would often be more just than his decisions.

He did not get exactly what he wanted, however. As the smith began her labors, she was suborned by a potentate of Hell, who believed that the Grand Duke was abdicating his divinely-ordained duty to his people, and deserved a carefully-orchestrated punishment. The potentate enchanted the pistols along a different course: the one with the clearest perceptions of reality deserved the victory, for that one would best serve the purposes of Hell in purging the world. The Grand Duke believed that the pistols were made correctly, of course, and now puts less effort into seeking out the just solution to conflicts than he ever did before. He convinces himself that the “decision” of the Duello Court is truly just, if the pistols have deemed it so. Far more such duels are lethal than ever before, though.

The Court’s Justice are a brace of perfectly identical +1 flintlock pistols. They are truly magnificent: they weigh half as much as normal pistols of their size, and they are decorated with incredibly minute engravings depicting the grandeur of the palace of the Grand Duke. No force in the world may cause them to rust or corrode in any way (they are immune to damage from acid).

At the duel’s conclusion, both duelists immediately lose attunement with the pistols.

This magic weapon grants a +1 bonus to attack and damage rolls you make with it. It has a maximum of 5 charges and regains 1d4+1 charges each day at dusk. When you hit a creature with a ranged weapon attack using this weapon, you can spend 1 charge as a bonus action to force a second creature within 10 feet of the original target to roll a DC 13 Dexterity saving throw. On a failed saving throw, the secondary target suffers 2d10 necrotic damage.

These are a mix of cleaned-up versions of items previously posted in Harbinger of Doom and new items. Most of them are significantly complicated in one way or another, but the most complicated – Court’s Justice – are more of a single-encounter story element than something you’d use regularly.

My main challenge in creating these is that I gravitate so strongly toward +1dX damage. I mean, I have that problem with every kind of magic weapon, but it’s especially egregious with firearms for whatever reason. I also get very hung up on fiendish themes – there’s a long list of diabolic flintlock names on my cutting-room floor here (I particularly like Herald of Nessus). The Court’s Justice isn’t a reference to Percy’s cursed revolver in Critical Role – I wrote that long before there was a Critical Role. But, well, the “creepy devil gun” thing has a long heritage in folklore.

The bonus action free shot of Harvester and Silhouette are unabashed references to the WoW Hunter’s Arcane Shot and the Torchbearer 2 Outlander’s various shadow-shot features.

Anyway, I hope I’ll be back real soon with a UA Artificer breakdown!

5 Homebrew Rules for your game