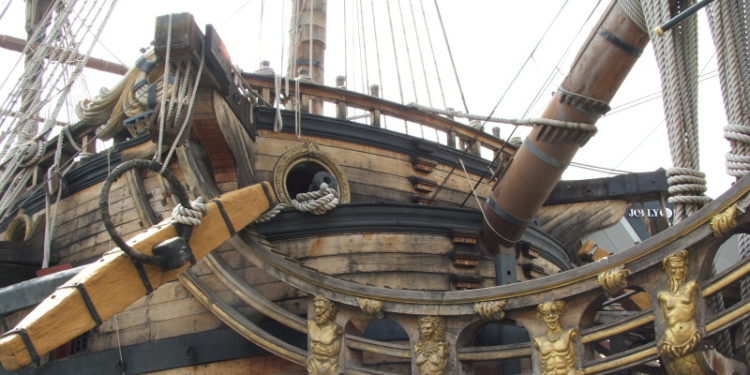 For Seas of Vodari, we’re including a variety of new ship upgrades. I wrote about another set of them in the long-long ago of 2019 (specifically, a year ago next week); some of those made it into the book, some of those got too clearly overlapped by Ghosts of Saltmarsh ship upgrades, and some just didn’t make the cut. Anyway, I hope you’ll enjoy these.

These sails slowly shift color to reflect the current color of the sky, from light blue to iron-gray to midnight-dark. The ship’s speed from sails increases by 10 feet.

The edges of these sails are decorated with feathers. While the ship is sailing with the wind and moves at least its speed in a round, a creature at the ship’s helm can command it to fly. It gains a flying speed equal to its sailing speed for up to 1 hour, after which it can’t fly again until the next dawn. While flying, its speed is still affected by wind conditions, but not by currents in the water.

(This ship upgrade is a revision and a substantial simplification from a previously article.)

The cloth of these sails is mostly canvas, but with mithral edges and some thread throughout that give them a silvery sheen and extraordinary resilience. These sails gain +2 AC, have double their normal number of hit points, and the ship loses 10 feet of speed for every 50 points of damage they take, rather than 25.

This mast is made from a tree that survived a natural lightning strike, and it still carries some of that power. Every part of the ship gains resistance to lightning damage. While aboard the ship, the ship’s captain can cast call lightning (saving throw DC 14) once, and regains the ability to do so at dawn.

Through the power of rare elven magic, the wood of this bark-covered mast is still living. The boom and rigging grow leaves. Once per hour, the hull and the sails each regain 1d10 hit points. While aboard the ship, the ship’s cook can cast goodberry once, and regains the ability to do so at dawn.

A ship’s draft determines whether it is suited to open ocean, coastal waters, or river travel. While aboard the ship, the ship’s bosun can spend 10 minutes of concentration to reshape the hull. The ship can have a full keel and deep draft for rough waters, or a draft as shallow as three feet to navigate rivers that almost no other boat could manage. These changes don’t affect the ship’s cargo capacity.

The inside of the hull is inscribed with eldritch runes that warp space and mass, allowing the ship to carry far more than its size suggests. The ship’s carrying capacity for non-living cargo is doubled. Passengers and animals that stay in the hold find it a deeply distressing experience. For each day of travel, there is a 1% chance that a passenger or animal that stays in the hold is lost to the Ethereal Plane.

I don’t feel like there exists anything resembling a sound basis for costing the ship upgrades, so these numbers are completely made up. I do think that a dimensional hull is solidly one of the most useful items here, at least.

It’s so weird that ship upgrades don’t follow anything remotely resembling 5e magic item format, and most of all that they don’t have rarities. There would be a full-on skyship hull in this article, in the form of legendary skybound sails, if legendary upgrades were even a Thing.

For anyone wondering, we’re hard at work on Seas of Vodari, which is why I missed posting some weeks of 2019. That’s going to continue for at least a few more weeks, until and unless UA shows up with new content to talk about.

Faction ranks benefits for your players