Encounters for Pirate and Coastal cities 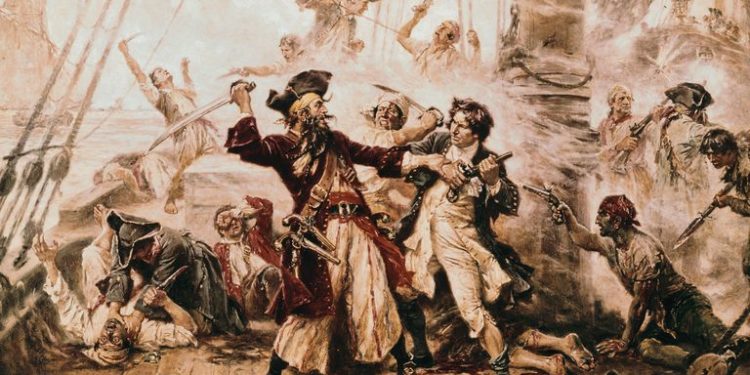 Can’t wait for Ghosts if Saltmarsh to come out and want to add some piratey stuff to your game? Or has time already passed and you are playing the adventure but want some encounters to add between dungeons when staying in a port or pirate city/town? Here I provide you encounters I created, some of them using names from the Forgotten Realms setting which can easily be changed for whichever setting you are playing with.

Without further ado, grab your nearest d12 and roll it to get your next encounter for your home game:

While walking through the street, a house’s wall gets destroyed in tons of pieces as a cannonball goes flying from it. Every character in the way of the cannonball must make a DC16 Dexterity Saving Throw or receive 4d10 bludgeoning damage.

Inside the house stands an old decrepit Halfling with almost no hair who just says “Oopsie” after the explosion. This Halfling, who goes by the name Jirgol Tinknail was adding a precision improvement for the cannon when he accidentally pulled the wick making the cannon shoot. He is a tinkerer who works for several famous pirates, and can help you meet with some of them as an apology. Use the commoner stats for Jirgol Tinknail if needed be.

2. Explosion in the distance

An explosion goes off at the end of an alley, starting a fire in a near house. The explosion was provoked by Elvir Softbreeze, an elven woman who lighted a pipe near a barrel full of gunpowder (or smokepowder). Elvir lays unconscious on the ground.

Inside the house child screams come out from a window. A wardrobe fell on top of a gender-fluid woman who now stands by the name of Marie Bluesail by the explosion. Marie is incapable of getting out by herself. A DC14 Strength (Athletics) check is needed in order to help her get out by pulling the wardrobe up. By the moment the players arrive, a 5-year-old girl by the name of Olive is trying to help her parent out without any progress.

Those with a passive perception of 14 or more are able to see an old human woman by the name of Abigail Goldtooth walking slowly through the streets while a covered figure stealthily moves behind her intending on stealing the pouch of gold clinging from her belt.

Abigail Goldtooth is a famous pirate whose days of glory happened more than 30 years ago. The burglar is a half-elf who goes by the name of ‘The buccaneer’.  Use the bandit captain stat block for ‘The Buccaneer’, and the swashbuckler stat block for Abigail, who appears to still be in shape.

Those with a passive perception of 15 or more can see a hooded figure that seems familiar. That hooded figure is a muscular human known as ‘Pigglet’ and is looked for treason against whatever governs your pirate town or city. He is wanted alive with a reward of 50gp.

Unknown to everyone, Pigglet got his nickname because he is, in fact, a wereboar. If directly confronted, he will assume his hybrid form. Are his hit points to be reduced below 30hp, he will attempt to escape shapeshifting into his boar form.

A big group of people are all together forming a big ruckus in the streets or a tavern. Bertha Coralbeard, daughter of the famous pirate Alarik Coralbeard, stands in the middle talking about her recent achievements. She is well known for having destroyed hundreds of Waterdeep galleons with her ship crew.

Right now she is talking about how she got to recover the big booty from her father’s sank ship (which sank 2 years ago). She got to hide the gold in some hidden place she will not tell, but likes to boast about how it is now in her position, making her the wealthiest pirate in the city.

A half-orc named Brorm comes close to the party and starts asking if they are to leave the city soon. He is thin and not as muscular as half-orcs usually are. Brorm was a navigator from a ship called ‘Penelope’ from the Sword Coast that got accidentally forgotten at the port when his crew left. He doesn’t know the city, got all his money stolen and wants to leave as soon as possible, even if he has to do hard work to do so.

Brorm is Lawful Good, and uses the commoner stat block. If promised to leave the city by the party, he will want to help them in any way possible until they finally reach the destination.

7. Dead person in an alley

While walking through the streets, the party can see a corpse dropped in an alley. The dead man is a gnome with a blade wound in his throat, and a black dagger stuck in his belly. The weapon has the symbol of a Syren inscribed in it. From the dagger, a note is clinging, which says “Dead men tell no tales”.

Apart from a silver tooth and the dagger, its corpse has got nothing of value. It seems like it was recently killed.

A great bearded human with a ponytail sits in a stool on a street corner. A great part of his skin is covered with pirate and sea-oriented tattoos, as well as some of sea creatures. By his side sits a woman teenager getting her first tattoo of a jellyfish made by him. The man, named Wally Colors, can make people tattoos for a cost ranging from 5gp to 10gp.

9. Treasure maps vendor (some are false or encrypted)

An obese human sits behind a table in the street, going by the name of ‘The Cartographer’, even though he knows nothing about cartography. He has got a big nose and golden rings in most of his fingers. Before him, in the table, are displayed pieces of numerous treasure maps for the people to see. If interested, you can get the piece plus the rest of the map for an amount of gold depending on how much of a legend the hidden treasure is.

About ¼ of them are fake, which can be found out with a DC19 Wisdom (Insight) check, as he is an excellent liar.

Cristoph Merrywater, a tiefling pet vendor walks the street wearing a pirate hat and with a cart full of jailed animals. He is incredibly charismatic and might want to bargain the prices if more than one is intended to be bought.

Some of the animals are a parrot (25gp), two brother monkeys (50gp each), a Dalmatian puppy with a patch covering his right eye (70gp) and a goldfish capable of flying that can breathe air (120gp).

While walking through the streets, the characters notice all security guards (or whatever is used for security in this city, if any) is gone or is walking away from where the party is at. At that moment, 6 wererats jump from a balcony trying to surprise the characters, with the intention of knocking them out to steal their stuff. The gang is known as the ‘Kraken’s teeth’.

The wererat gang consists of Milly, Burt, Uker, Gary, Terran, and Jes. Milly and Uker are married and may fight verbally between themselves during combat, while Burt and Terran behave like best friends by helping each other in combat as much as they can. Both groups may act in a weird way if his/her companion is to die or be held hostage.

12. Bard telling tale about a sea monster, full of treasures

In a city plaza, a flamboyant woman elf can be seen reciting a tale about a legendary sea creature. Men and kids sit around her, enthralled by the story.  The elf is called Gweytriss Woodenmast, who plays the accordion. She has impressive red hair that goes up to her knees.

Use this tale as an adventure hook by making Gweytriss sing about the great treasures and relics warded by the sea creature/s you want your players to confront. This creature/s collected them by destroying numerous vessels for centuries.

Are you running Waterdeep: Dragon Heist and would like to add a heist to it? Or do you want to make one for a one-shot with your family or friends? Why not try out the one I created?