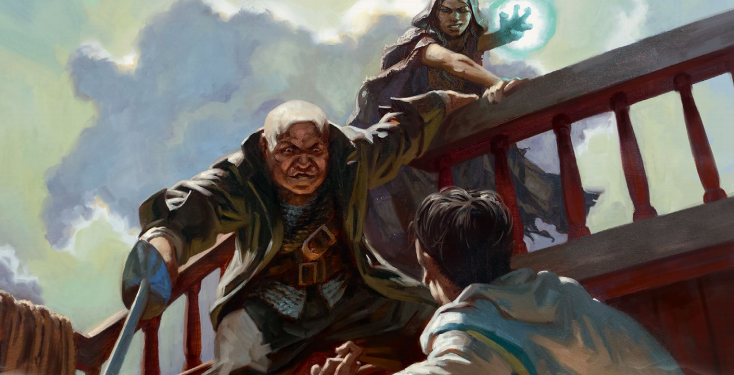 Saltmarsh Encounters seeks to provide a range of encounters for lower levels D&D 5th edition. It certainly delivers. However, the encounters could easily be used in Pathfinder or Dungeon World with little conversion.

The encounters are described briefly and though there is no descriptive box text to read out, there are enough details to cover the basics of Who is doing What and where.

Some of the encounters lack mention of motivation for the creatures, but this leaves room for the Gamemaster to link the creature’s actions to existing plots or factions.

Catchy names help guide the tone of the encounters, for example Eye Hard, Grim Raven, Mysterious Melody, Off to see the Lizard, Spectre Days and You’ve got Whale.

The text for this nifty tome is in two columns, with regular color art every other page to break up flow. The encounter table could have been hyperlinked to the individual encounters however.

Each art piece is well drawn and will provide inspiration for a character, scene or monster. Two shining examples are a Deep Scion on page 7 that makes a Mind Flayer look cuddly, meanwhile two Lizardfolk on page 16 look rather keen to beat the tar out of a meddling surface dweller.

Most of the encounters have 4 to 6 options for what creatures you encounter, thus expanding the variety of encounters from 60 out to over 160. This feature alone makes this tome rise above many others in value.

Avoid this book if…

Buy this book if…

What else have the Authors worked on?

Saltmarsh is set in the world of Greyhawk, if you want to know more –