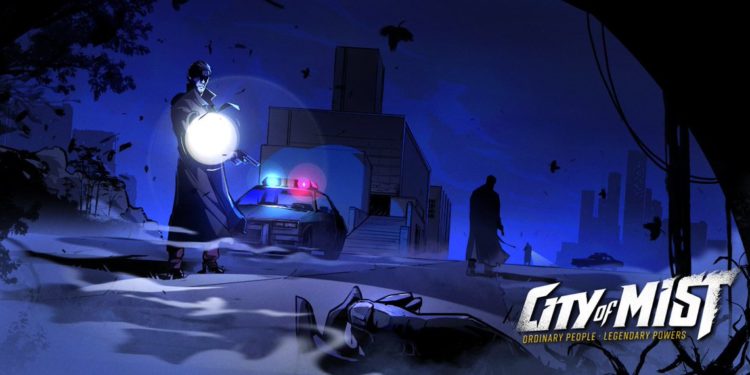 Today I’ll be reviewing the Ennie Award Gold Winner City of Mist game from 2016. This game is a completely funded game created from the Apocalypse Game Engine.

What is City of Mist?

City of Mist is a Tabletop Roleplaying Game from Oak Game Studio, set in a city that is literally called ‘The City’ where the spirits of gods, legends and characters from myths and fables inhabit normal people’s bodies. This allows them to receive special abilities, ranging from talking to animals to distorting reality itself. These people didn’t choose to receive powers, but were forcefully chosen by the mysterious entities I talked about before.

Another interesting aspect of the game is the Mist itself, which could almost be considered as another character playing in your story. The mystical veil of the Mist hides miraculous powers from the other, sleepwalking residents of the City. It makes armor look like a flak vest and fire breathing like a cheap party trick or a gas leak explosion, so no-one ever knows about the legendary. Modern-day legends exploit this to run secret lives and insidious organizations behind the veil of the Mist. 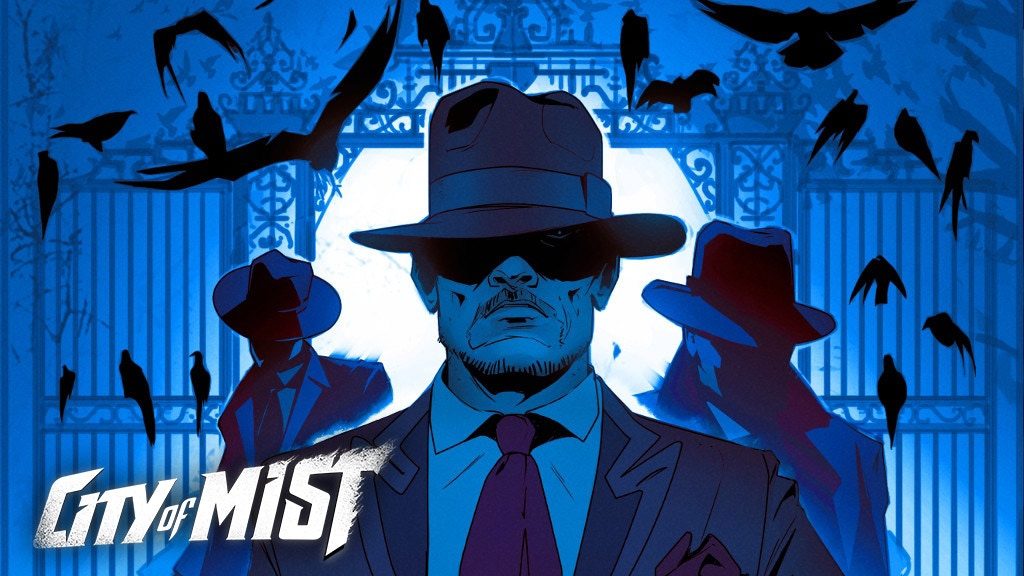 The game is meant to be played as a Noir Investigation game, with superpowers thrown in for some extra fun, but playing a huge part. However, the rulebook shows the Game Master (in this game called Master of Ceremonies, or MC) other themes that could be used with the game’s mechanics. An American Gods’ or a superhero style game are also playable with the rules, as long as there is a mystery to be solved.

The books do an excellent job in making its theme clear with the art style and the sections made to help MCs create Noir style stories. Yes, there is a whole section that teaches MCs how to create believable cases or detective stories. Not only will you find this section useful for this game, but might teach you some tips on how to run Noir detective TTRPGs.

I personally loved the theme of this book. It reminds me a lot to the Fables comics from Vertigo, or The Wolf Among Us videogame from Telltale Games. Having these magical people living in the world, as well as playing some of them, created some variety in the game genre that I receive open-handed. 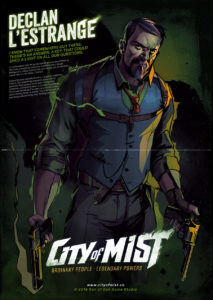 It would be a lie to say that you will be familiar with these rules if you have ever played another game based in the Apocalypse Game Engine. City of Mist does maintain lots of aspects from it, but their creators decided to change some things to help make it more suitable for its theme. I personally ran into some trouble with them, which I will name below, but all in all, it is a pretty easy to run ruleset.

Taking into account this game is made to be played in a very cinematic way, its way to manage combat is extremely different from other TTRPGs. The way it manages turns is by not having turns at all. The MC gets to choose a player who would put under the spotlight and asks them what they want to do. Once the player chooses, its action may lead to having the enemy attack. The MC chooses whichever character would keep the momentum of this fight scene going and so the ‘turn’ repeats itself. This requires a great level of concentration on how combat is going from the MC in order to not have players do nothing for a long while. I (stupidly) tried to run combat this way on my first time playing the game with 6 all newbie players and had to end up doing turns clockwise in order to not skip anyone, nor have them all suggesting they should be the one to attack at that moment. 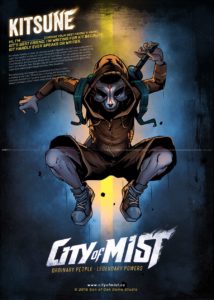 City of Mist’s most interesting mechanic, in my opinion, is the everlasting dilemma of maintaining a balance within your character. The Mythos are what make your character a ‘superhuman’ in a way, whereas the Logos are whatever they are good at as a normal human being. Having X-Ray vision would be an ability coming from your Mythos, whereas being extremely good at math would be one from your Logos. The more a character leaves aside its humanity (its Logos), the closer it will be from going Avatar, a super powerful, chaotic and extremely difficult to manage state, fully controlled by the Mythos. On the other hand, refusing to accept your Mythos can leave you in a Sleeper state, making the character lose its powers temporarily, fully losing perception of what the Mist hides.

Another trouble I ran into was with the different moves the players can make. When taking a look at them, they look very simple. However, due to the game having three types of ways a move can go – these being a miss, a hit with some consequence or a complete hit – most of them let the players earn different mechanical benefits when scoring a hit. Therefore, the player would need to grab a cheat sheet with all the possible things they could do and choose one or two of them. This led to some scenes where the actions dragged for longer than expected killing that cinematic feel the game is supposed to have. I’m not going to lie though. I put all that blame in me and my players as I suppose that after some sessions everyone would have every possible option memorized, making everything go smoother. It’s just that the game didn’t feel as beginner friendly as it looked like.

The ‘detective’ aspect of the game

I found the way City of Mist handled the way players gather information leading to the final answer marvelous. It made the players feel like they had an awesome amount of control in the game while skipping the non-important stuff and helping the MC give the perfect clues so the players don’t end up going in circles. If the players get too distracted with an incorrect theory they just happened to think of, you can easily point them in the right direction again by giving them the information they need to put them back on track. In addition to that, the game forces the players to do an introductory monologue at the start of each session, rewarding them by doing good at it. This enhances the Noir story style up to eleven, easily becoming one of my favorite game mechanics.

Tags play a vital part in how the game works. What is a tag? They are what makes your character have a chance in succeeding when doing something. This is what replaces the classical ability stats we usually find in other TTRPGs. When you get to do an action, you add in all the benefits both your character and the scenario it is in have. A billiard stick hanging in a wall, for example, can work as a weapon, thus giving you an extra chance on succeeding when trying to hit an enemy. This sum of points can be diminished if your character has got a status playing against what it is trying to do. Even though I really liked this quite original mechanic, there were some times when a player could use a monstrous amount of tags, making their rolls almost impossible to miss. Nevertheless, an optional rule within the same rulebook can solve the trouble so it isn’t super problematic. 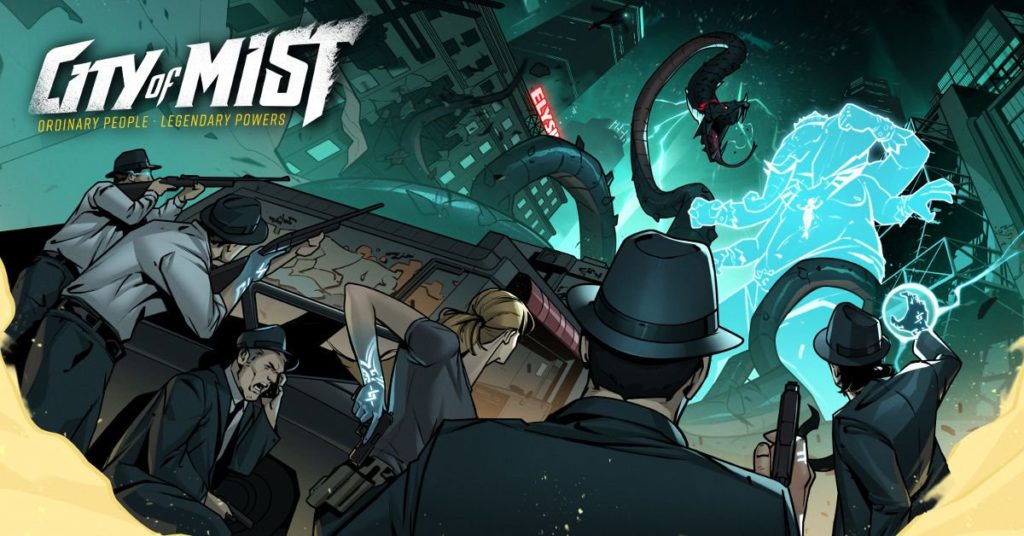 Hands down the best part of this book. The art looks gorgeous, while also giving you that Noir style filled with neon lights. As I said before, it reminds me a lot to the Fables comics just by looking at it. Just to give you an idea, I believe I would totally buy a book if it only had this kind of images. Fortunately, the rest of the book does also give you more than enough reasons to get it.

Marcin Sobon (lead artist) and his team definitely did a brilliant job both on making the book an outstanding thing to look at and in the comics they added in the rulebook itself. That’s right! There are comic book pages showing possible scenarios that could occur in this game to give some inspiration both to the players and MC.

As I detailed above, the game itself is not that difficult to play. Dealing with all the possibilities Moves do provoque some needed rules checkings, though. I recommend having cheatsheets with all the Moves at hand for each participant though, as each one has its own rules and it’s not that easy to remember them all at first.

The Juice mechanic, however, I found pretty hard to understand at first. When I finally got how it works it clicked on me, but I do still believe there must be some easier way to deal with that mechanic. For now, I would have some handout with all the things it can do at the ready.

There were some little details I wanted to point out that didn’t fit in any of those categories I named above. Therefore, I’ll name my notable mentions in here. The book does include the whole City as a setting, separated in notably different districts. Each of them has some locations you can throw in your sessions as well as extremely interesting NPCs. The Smokey Jazz Club and Alice (from Alice in Wonderland) are some I really like. She is always surrounded by a maddening corruptive aura making everyone prefer to leave her alone.

Last but definitely not least, the book has an entire section filled with NPC stat blocks. They range from common guards to the Phantom from the Opera, having a surprising variety. For the toughest guys, it has even got a separate section with all the information you need about them, including the people working in their intricate webs, locations under their control and even cases the players could solve to create a long-running campaign all revolving around one single NPC!

Theme9.5
Game Mechanics6.7
Art10
Game Difficulty7.5
Extra Details9
8.5Overall Score
All in all, I find City of Mist as a pretty different experience to what I am used to, with some mechanics that could need some improvements but are good enough to make the game, if played correctly, a very fun game.
TagscitydetectivelogosmistMythosnoirofreview
Previous Article